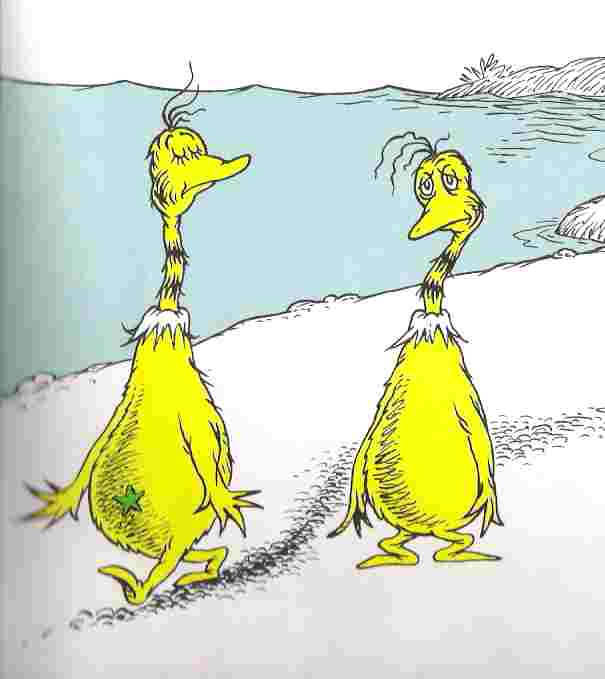 A recent paper in the New York Law School Review applies Dr. Seuss’s The Sneetches to the debate over same-sex marriage. (Thanks to this article in the Washington Post for alerting me to it.) As the paper notes, Seuss’s story is amazingly versatile.

Sneetches is about those with stars discriminating against those without:

When the Star-Belly children went out to play ball,
Could a Plain Belly get in the game? Not at all.
You only could play if your bellies had stars
And the Plain-Belly children had none upon thars.

When the Star Belly Sneetches had frankfurter roasts
Or picnics or parties or marshmallow toasts,
They never invited the Plain-Belly Sneetches
They left them out cold, in the dark of the beaches.
They kept them away. Never let them come near.
And that’s how they treated them year after year.

The arc of history bends towards justice, however, and the sneetches without stars begin acquiring them. To maintain their distinctiveness, however, the privileged sneetches begin removing their stars (cosmetic surgery?). Then the Sneeches with newly acquired stars begin removing theirs, prompting the now starless Sneeches to acquire new stars. After a while, the situation becomes so confused that everyone gives up and decides to accept everyone else, with or without stars.

Here’s the Post’s description of the law paper’s thesis:

Nicolas compares the Sneetches’ dilemma not only to the gay minority seeking marriage recognition from the heterosexual majority but to African Americans who resist linking the civil rights movement and the same-sex-marriage movement. In addition, he thinks Seuss’s morality tale speaks to battles between “assimilationist” gays and “non-conformists,” who criticize those “seeking mere formal equality by erasing valuable differences that set gays and lesbians apart from heterosexuals.”

Niicholas is right to expand the drama to African Americans. I have been recently teaching exactly this drama in Toni Morrison’s Song of Solomon. On the one hand, there is a savvy black businessman, Macon Dead, who wants exactly what the whites have and distances himself from the black community as he seeks to get it. Perhaps our own best case of this is Supreme Court Justice Clarence Thomas, who has turned his back on traditional black concerns such as affirmative action, voting rights, and social safety nets.

On the other hand, there is Morrison’s figure of Guitar, who defines himself firmly against all whites. (His equivalent doesn’t show up in Sneetches.) Indeed, Guitar belongs to an organization that kills an innocent white for every innocent black that is killed by whites. The book sets up the twin poles of black assimilation and black separatism, and the hero must find a place for himself in the middle. Which is to say, he must figure how to get along with whites even as he claims his black identity.

Comedian Larry Wilmore, “Senior Black Correspondent” on the Daily Show, once noted that, if America is a melting pot/Irish stew, then that stew is getting browner. Something along these lines occurs in Sneetches. I guess we could also add that our stew is getting gayer.

In the Wilmore sketch, John Stewart, playing the embattled white man, asks whether the stew can be a white bean Tuscan stew, to which Wilmore delivers a firm negative. As America grows more diverse, older white Americans might cling to their white identity, but the next generation is mixing it up, whether through interracial marriage, interracial adoption, or simply borrowing each other’s traits.  I myself now have two mixed-race grandchildren, Alban being half Asian, Esmé being part Carib, part African. Starred Sneetches are throwing off their stars, non-starred Sneetches are acquiring them, and everything is becoming a jumble.

Is this a great country or what?