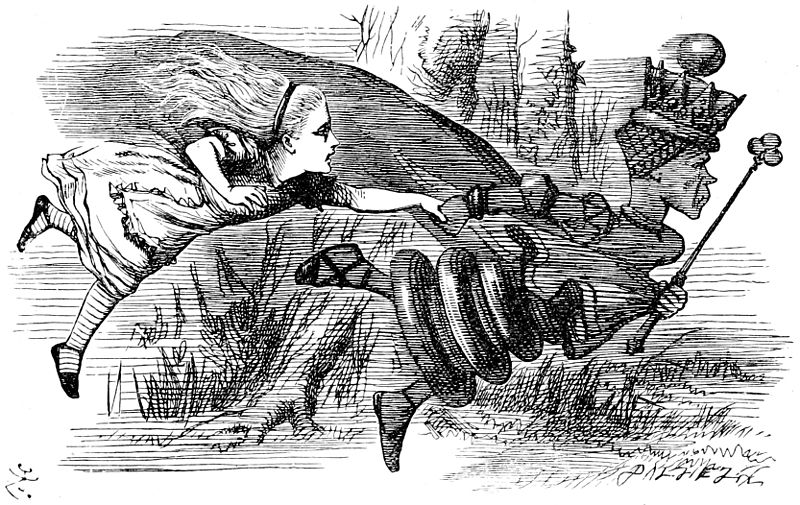 John Tenniel, “Through the Looking Glass”

Other than Shakespeare’s plays, to capture contemporary politics I’ve turned most frequently to Lewis Carroll’s Alice books. Who else but the foremost nonsense writer of the 19th century could do justice to what the United States has been experiencing in recent years. Now respected political scientist Jonathan Bernstein of Bloomberg View has alerted me to another applicable passage. Donald Trump, he says, is involved in a “Red Queen Race”:

My feeling at this point is that Trump earlier this year was able to escape his Red Queen Race — in which he had to do more and more outrageous things in order to maintain the same (very large) share of media attention. He escaped it because CNN, in particular, decided to milk the Trump Show the way that it milked the missing airplane. As long as that lasted, Trump only had to stay outrageous, not constantly ratchet up. However, it’s harder for the media to ignore long-standing norms of fairness in the general election. Which means the Red Queen Race is back.

In Through the Looking Glass and What Alice Found There, Alice at one point finds herself running alongside the Red Queen. They race along for about ten minutes with the wind whistling in their ears, only to discover that they are still under the same tree. Alice is confused:

Alice looked round her in great surprise. “Why, I do believe we’ve been under this tree the whole time! Everything’s just as it was!”

“Of course it is,” said the Queen, “what would you have it?”

“Well, in our country,” said Alice, still panting a little, “you’d generally get to somewhere else—if you run very fast for a long time, as we’ve been doing.”

“A slow sort of country!” said the Queen. “Now, here, you see, it takes all the running you can do, to keep in the same place. If you want to get somewhere else, you must run at least twice as fast as that!”

From attacking Gold Star parents to contending that Russia has not invaded the Ukraine to kicking a baby out of a campaign event, Trump has certainly managed to stay atop the news cycle over the past few days. (I don’t recall hearing anything about Hillary Clinton and Tim Kaine recently other than they are out there campaigning somewhere in the Midwest.) If making outrageous statements is a version of keeping pace, it appears that Trump is running twice as fast as anyone ever has, and he is certainly getting somewhere else.

Whether that somewhere else is where he wants to be is another question.

Rubio and Cruz as Tweedledum and Tweedledee

Donald Rumsfeld through the Looking Glass

Scandal? Nothing but a Pack of Cards

The Presidential Candidates in Wonderland

It’s Been a Mad Tea Party