Ramadan – The Self Lightens 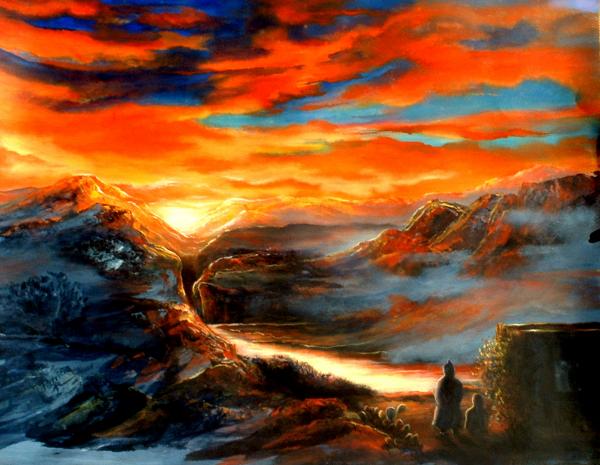 We have once again moved into the holy month of Ramadan and, like many non-Muslims, I am both puzzled and intrigued by the ritual observances connected with it.  I came across the following poem by Nomi Stone about her own attempts to achieve some understanding.

Stone, the daughter of a Reformed Jewish Rabbi, spent a year as an anthropologist in the ancient Jewish community of Djerba Island off the coast of Tunisia.  While there, she also sought to understand better the Muslim neighbors.  “Many Scientists Convert to Islam” describes her “conversations with a Muslim friend.”

There’s much about the poem that I don’t understand but here’s what I carry away. Stone does not have the kind of faith that her friend has and wants him to explain it to her. If she makes several references to the Danish philosopoher Soren Kierkegaard, I think it is because she is wrestling with her own lack of faith and her status as an outsider. Kierkegaard calls lack of faith “sickness unto death” or despair.

In a passage that Stone quotes, Kierkegaard says that there are three kinds of despair: the despair of being unaware that we have a true identity, the despair of not knowing our true identity, and the despair of knowing it but not being able or willing to accept it.  Our true identity is given to us by God and, as Kierkegaard sees it, only when we accept it do we step out of despair and into faith.  This last despair, as I understand it (and I admit to not understanding Kierkegaard all that well), is a higher order despair.  Those suffering from it, or “contracting” it,” do so because they find themselves unable to surrender to their true self.

I think, then, that Stone is experiencing a version of what many of us struggle with (certainly I do).  She desires to believe but is not entirely able to give herself over to believing.  Her first sentence may be delivered as a factual statement but I read it as the beginning of an exploration: “So, if you don’t believe in full it means you don’t believe.” She is talking to someone who appears to, in fact, believe in full and she wants to better understand his belief.  Because she is in this position, her words seem to be ineffective; they tumble onto his rock.  Nevertheless, out of the conversation a book happens.

When she talks about Islam, she invokes stereotypes she has heard, such as an afterlife filled with sumptuous feasts and virgins. He focuses instead on life, which he says is like a short train ride that becomes richer with every passing day as his faith deepens.

Note how, in the first part of the four-part poem, there are a number of images of the poet standing outside, perhaps like a detached and skeptical scientist.  She stands outside a magnificent hotel and, as she looks up at the darkening sky, she senses that there is more there than she can see. The birds, who move between heaven and earth, sting like hornets because they remind her that she can’t see “what is on the other side”:

Many Scientists Convert to Islam
Conversations with a Muslim friend

So, if you don’t believe in full it means you don’t
believe. Words tumble onto the rock. A book
happens.

Okay then tell me about heaven’s beautiful
food and women. Who are these women?

My friend says, “This life is like a twenty-minute train ride.”
He says, “I live inside my
faith more fully every day.”

I am standing on soaked pavement outside
that majestic hotel in the center of town. Just before
dark, the birds come in a furious swoop like
hornets, stinging the sky to let in

what is on the other side.

The second part of the poem sees her probing her friend further.  Thinking perhaps of the dawn to dusk fasting required by Ramadan, she asks whether Islam renounces the body now so as to experience it fully later.  She is probing the relationship between the earthly and the spiritual as Muslims see it, but the answer she gets seems to say (1) Muhammad was fully aware of the physicality of this world and (2) she is so much in her head that she is not living in this world.  Or as her friend puts it, “You ask more questions than you take in breaths of air.”

But if this is true, if she is a bird beating against a sky that won’t let her in, then the concluding statement of part II is wrong: unlike her friend who lives in faith, she herself is contracting Kierkegaardian despair.  Perhaps she knows this but fights against admitting it—as in “what do you mean I’m in despair?! I feel perfectly fine.”

Then the next life is equally
about the body, denied in the first?

“Do you know the Prophet knew the exact number of bones in the human
body? And why do you ask so many questions? You ask
more questions than you take in breaths of air.”

The birds beat. They crumple in
rivers of sky. At the same time every day. Kierkegaard said that

every instant a man in despair is contracting it. My friend is not
in despair; I am not in despair.

In part III, her friend gives her a version of Kierkegaard’s triumph over despair: accept who you are as you take the short train ride that is your life. Like a tourist, the poet tries out his ritual practices—she goes to a mosque and fasts for a week (Muslims fast for a month).  Her friend’s uncle calls her out for merely experimenting. “Shame on you.”

Something is shifting, however.  Sometimes, in the cold November current (but why November since Ramadan is in August?) she senses a whirring of wings that “cloud into petals.” The birds now seem to be getting through, yielding beautiful images of transcendence. Or more accurately, sometimes they seem to let in what is on the other side and sometimes she senses nothing:

Kierkegaard says there are three kinds of despair: despair
at not being conscious of having a self, despair at not being
willing to be oneself, and despair at willingness to be

oneself. Listen, the train. Why complain about
the seat, the air conditioner? Just do
your best until you arrive.

During Ramadan, I fasted a week. I went to the mosque.

In the cold November current, there is a whirring of wings. Sometimes
they cloud into petals, sometimes they don’t.

Finally, in the last part of the poem, the poet talks about glimpsing what Islamic prayer seeks to open up.  Islam is not about escaping the body but rather moving more deeply into the body.  When she presses her head against the ground in prayer, she understands what her friend means about the train ride. The understanding comes to her in a quiet voice, and while that voice feels like a borrowed voice–a borrowed ritual–it may also be her own. Perhaps she is experiencing the union of self with God that Kierkegaard saw as true faith.  She’s not entirely sure, however.

4
When the forehead presses to the earth, the blood moves
down. In the joining, the self lightens. You must count the three perfect
joints of each finger to keep time. Make no mistake, you leave the body only

through the body. The train ride. This quiet voice that is borrowed or my own.

Can the social scientist convert to, if not Islam, then faith? That is Kierkegaard’s challenge to us and to himself.  His struggle with doubt can be found in many religions. Do you believe in the risen Christ? Can you free yourself from desire? Can you hear the  “still small voice” of God that Elijah heard?

How wonderful that a Jew should hear that voice while observing Ramadan!

This entry was posted in Stone (Nomi) and tagged "Many Scientists Convert to Islam", Islam, Nomi Stone, Ramadan, Religion. Bookmark the permalink. Post a comment or leave a trackback: Trackback URL.