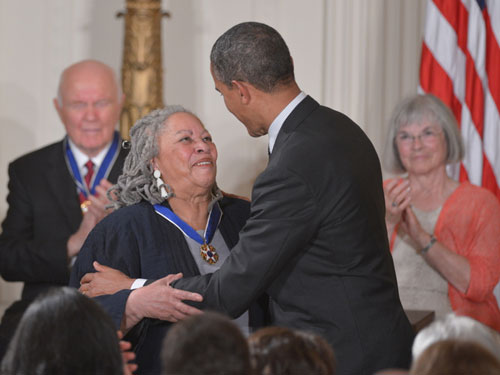 In honor of our re-elected president, I examine one of his favorite novels, which I happen to be teaching at the moment. When Barack Obama awarded Tonni Morrison the Presidential Medal of Freedom, he said he read Song of Solomon both to learn how to write and “how to be.”

The novel provides us insight both into Obama’s dreams and into his significance for America’s African American population, which voted for him by a staggering 93-7 percent margin. Milkman, the protagonist, is a 30-something man who struggles with identity confusion until he finds a meaning to his life, at which point he soars to transcendent heights.

From what we know of Obama’s life, he too struggled with Milkman’s identity confusion. Like Milkman, he had to figure out what it meant to be black. Like Milkman he had to decide whether he wanted to follow a well-defined and lucrative career path (corporate law for Obama, working in his father’s business for Milkman) or branch out on his own. Like Milkman he undertook a roots quest (Dreams of My Father). Like Milkman he stepped beyond the bounds of what anyone thought was possible.

In Milkman’s case, the metaphor of flying is key. The book begins with images of flight—a failed flight as a man with a pair of makeshift wings jumps to his death—and we learn that the young Milkman starts off discouraged:

When the little boy discovered, at four, the same thing Mr. Smith had learned earlier—that only birds and airplanes could fly—he lost all interest in himself. To have to live without that single gift saddened him and left his imagination so bereft that he appeared dull . . .

By the end of the novel, however, he has found himself—as Barack Obama did—and a new world opens up. In the novel’s magnificent final paragraph, we see Milkman, hunted by his dark double (his former friend Guitar, unhinged by black rage), leaping from a cliff and perhaps (we’re not told for sure) flying. “Shalimar” in this passage is Milkman’s slave ancestor, who is rumored to have flown back to Africa:

Without wiping away the tears, taking a deep breath, or even bending his knees—he leaped. As fleet and bright as a lodestar he wheeled toward Guitar and it did not matter which one of them would give up his ghost in the killing arms of his brother. For now he knew what Shalimar knew: If you surrendered to the air, you could ride it.

I can imagine a youthful Obama reading this passage and thinking, as he would later say in his 2008 victory night address, “America is a place where all things are possible.” (Extended quote: “If there is anyone out there who still doubts that America is a place where all things are possible . . . tonight you have your answer.”) Obama could not foresee that he would be dogged by an implacable hatred, like Milkman is by Guitar, when as president he set about enacting his promises. But as the novel helped him negotiate his identity quest, perhaps he sensed he would later need its encouraging vision. Certainly he did when powerful forces were unleashed to insure that he would be “a one term president” (to quote Senate Minority Leader Mitch McConnell).

What Milkman learns, and perhaps passed on to Obama, is that one must step openly into the conflict. Time and again, Obama has embraced big decisions, whether they have involved passing the largest economic stimulus in U. S. history, instituting a monumental healthcare plan, engaging in a daring rescue of the auto industry, going after Osama Bin Laden, embracing gay marriage, putting together a coalition to overthrow Libya, signing an order to cease deporting the children of immigrants, and a host of other things, any one of which could have (if it had gone badly) spelled an end to his presidency. Time and again in the past four years, Obama has leaped off the cliff into unknown territory. Tuesday night the country rewarded him for his daring.

There is another point Song of Solomon makes about black dreams. In a column on why Obama means so much to African Americans, the Washington Post’s Jonathan Capehart (who I just discovered is a fellow Carleton graduate) talks about what was a stake for them in the recent election:

For African Americans, Obama embodies their hopes, dreams and aspirations. The biracial son of a single mother who had his share of tough times but who also worked hard enough to walk through doors once thought impossible. Helping put him in the Oval Office was an act of pride for African Americans. Helping him stay there for a second term is as much about securing his legacy as it is reinforcing ours.

Likewise in the novel, Milkman, searching out the men who knew his grandfather, discovers that he had special significance for them. Macon Dead, Sr. was a successful farmer who was shot by whites who wanted his land. As he listens to stories about Macon, Milkman realizes that, when he was killed, a dream died for the others. He also discovers that he can rekindle that dream by talking about the successes of his father (Macon Dead, Jr.), who escaped the killers and went on to become a successful realtor and landlord. The passage is long but I cite it in full because I think it gets at the symbolic significance that Capehart is talking about—why it was so important for Obama to be first elected and then, so that his legacy would be preserved, to be re-elected:

They talked on and on, using Milkman as the ignition that gunned their memories. The good times, the hard times, things that changed, things that stayed the same—and head and shoulders above all of it was the tall, magnificent Macon Dead, whose death it seemed to him, was the beginning of their own dying even though they were young boys at the time. Macon Dead saw the farmer they wanted to be, the clever irrigator, the peach tree grower, the hog slaughterer, the wild-turkey roaster, the man who could plow forty in no time flat and sang like an angel while he did it. He had come out of nowhere, as ignorant as a hammer and broke as a convict, with nothing but free papers, a Bible, and a pretty black-haired wife, and in one year he’d leased ten acres, the next ten more. Sixteen years later he had one of the best farms in Montour County. A farm that colored their lives like a paintbrush and spoke to them like a sermon. “You see?” the farm said to them. “See? See what you can do? Never mind you can’t tell one letter from another, never mind you born a slave, never mind you lose your name, never mind your daddy dead, never mind nothing. Here, this here, is what a man can do if eh puts his mind to it and his back in it. Stop sniveling,” it said. “Stop picking around the edges of the world. Take advantage, and if you can’t take advantage, take disadvantage. We live here. On this planet, in this nation, in this county right here. Nowhere else? We got a home in this rock, don’t you see! Nobody staring in my home; nobody crying in my home, and if I got a home you got one too! Grab it. Grab this land! Take it, hold it, my brothers, make it, my brothers, shake it, squeeze it, turn it, twist it, beat it, kick it, kiss it, whip it, stomp it, dig it, plow it, seed it, reap it, rent it, buy it, sell it, own it, build it, multiply it, and pass it on—can you hear me? Pass it on!”

But they shot the top of his head off and ate his fine Georgia peaches. And even as boys these men began to die and were dying still. Looking at Milkman in those nighttime talks, they yearned for something. Some word from him that would rekindle the dream and stop the death they were dying. That’s why Milkman began to talk about his father, the boy they knew, the son of the fabulous Macon Dead. He bragged a little and they came alive. How many houses his father owned (they grinned); the new car every two years (the laughed); and when he told them how his father tried to buy the Erie Lackawanna (it sounded better that way), they hooted with joy. That’s him! That’s Old Macon Dead’s boy, all right! They wanted to know everything and Milkman found himself rattling off assets like an accountant, describing deals, total rents income, bank loans, and this new thing his father was looking into—the stock market.

America’s black community has watched efforts by America’s rightwing to delegitimize Obama. They have recognized when racist code words have been directed against him (sometimes the words haven’t even been coded). While the economic plight of many of them remains dire, they have remained fiercely loyal because of the hope he has given them. That’s why many in Florida were willing to stand in seven-hour lines expressly designed to discourage them from voting. That’s why there was no “enthusiasm gap” the second time around. Without them, Obama would not have won Virginia, Ohio and, if he takes it, Florida. Whether or not you yourself voted for Obama, how can you not find this inspiring?

Added note: After posting the article above, I came across an interesting piece talking about how Obama’s speech writing sometimes appears to channel Song of Solomon. Check it out here.

Previous posts on Song of Solomon

Morrison’s Song of Solomon under Attack

This entry was posted in Morrison (Toni) and tagged Barack Obama, Election 2012, Song of Solomon, Toni Morrison. Bookmark the permalink. Post a comment or leave a trackback: Trackback URL.