On Being Named after Christopher Robin 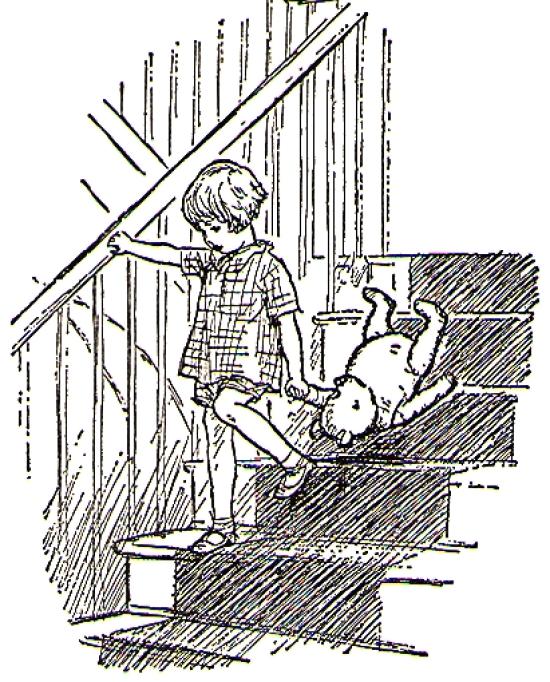 As I have been writing about fathers and sons in the past few posts, I shift today from my position of father to that of son and to the literary origins of my name.   My father named me after Christopher Robin and recently told me that he envisioned having the kind of relationship with me, his first born, that Christopher has with Pooh.  Learning this has opened up some interesting insights into our relationship.

My father, who was born in 1923, was three years younger than Christopher Robin Milne.  He therefore would have “been very young” when A. A. Milne’s poetry collection When We Were Very Young appeared in 1924.  Winnie the Pooh was published in 1926, followed by a second collection of poetry in 1927 (Now We Are Six), and finally by the second set of Pooh stories in 1928 (The House at Pooh Corner).  My father’s English-American family had the books early on.

Milne’s whimsical stories, his comic poetry, and his wry understated humor went straight into my father’s bloodstream.  Not only was he roughly the same age as Christopher Robin, but he could relate to other aspects of the book as well.  Pooh is a poet, as was my father at an early age.  (My father also identified with the water rat poet in The Wind in the Willows).  Like Pooh, my father liked to dwell upon nature—he was a sickly boy who spent long hours watching and drawing birds.  Pooh’s poetic meditations on a warm summer day (which I quote from memory) would have spoken directly to him:

Oh the honeybees are gumming
On their little wings and humming
That the summer which is coming
Will be fun.
And the cows are almost cooing
And the turtledoves are mooing
Which is why a Pooh is pooing
In the sun.

From what I know about my father’s childhood, he hid out in literature and nature.  He had a father who thought that men should be forceful and was worried at how different his quiet and sensitive youngest son was from his two athletic, fraternity-member older brothers.  My Victorian grandmother appreciated him, however, dressing him in Little Lord Fauntleroy velvet (which my father loved).  My father may have seen my birth on June 12, 1951 (the day before his birthday) as a chance to return to his childhood.  He could both imagine me as himself at an earlier age and look forward to an idealized innocent relationship.  Maybe this would help wash away some of the memories, from seven years before, of the concentration camp he witnessed only days after it was liberated.

As I’ve mentioned in earlier posts, my father proceeded to read all his favorite books to me.  Interestingly, I think we avoided the last chapter of The House at Pooh Corner, which hints at a time when Christopher Robin and Pooh will separate, just as we avoided the final chapter of Peter Pan, when Wendy grows up.  I didn’t object.  In fact, I grasped that I was supposed to remain innocent as long as possible and tried very hard to do so, avoiding the harsher things that boys were doing (including fighting, using swear words and telling dirty jokes).  I spent a lot of time reading fantasy.

I read somewhere that the actual Christopher Robin did not embrace his father’s vision of him so readily but reacted badly.  Of course, it can’t be easy to have your schoolmates dance around you shouting, “Hush, hush, whisper who dares, Christopher Robin is saying his prayers.”

But signing on to my father’s dreams made separation from him difficult.  I so much wanted to be like him that, as a child, I even desired to have his bad eyesight and his inner ear disorder.  I became a literature professor like him and then felt like a failure because I was not the scholar that he was (a leading world expert on the French poet Guillaume Apollinaire).  Not until I reached my forties did I begin to see flaws in him, and my disillusion led to a harsh letter that I regret to this day.  I know it hurt him. But looking back, that letter may have been necessary if I was to stop berating myself for not having his strengths and to start acknowledging myself for my own particular virtues.

I think of this progression when my son Darien talks about the need to separate from me.  If he and Toby can separate successfully earlier than I did, then we’re doing something right as a family. (Evidence that they are can be found in Darien’s wonderful response to my post of two days ago.)  Now that I’ve finally succeeded in establishing an identity separate from my father’s, I can return to my profound gratitude to him for ushering me into the world of the imagination.  In Laurence Sterne’s Tristram Shandy, Tristram’s father believes that a man’s destiny is determined by his name (and then is horrified to discover that, through midwife error, what he considers to be the worst of all possible names has been bestowed on his son).  If being named after Christopher Robin destined me to be a lover of books, then I can’t imagine a greater gift from my father.

This entry was posted in Milne (A. A.), Uncategorized and tagged A. A. Milne, fathers and sons, House at Pooh Corner, Winnie the Pooh. Bookmark the permalink. Comments are closed, but you can leave a trackback: Trackback URL.