Our Most Famous (and Most Misread) Poem 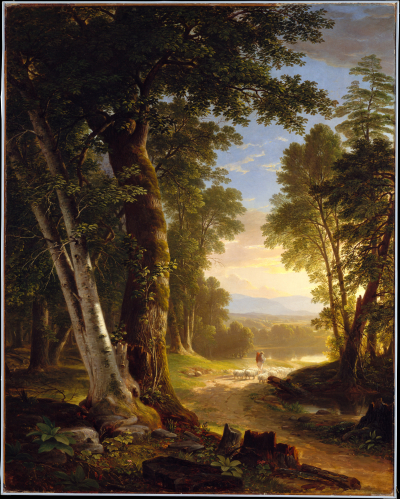 Today I walk into my first classes after a year of sabbatical.  After having spent all day Friday meeting with new entering students and hearing about their  momentous decision (as they see it) to attend St. Mary’s, it makes sense for me to write on decision making.

In what is arguably America’s most famous poem is about decision-making–or more accurately, most famous poem about decision-making remembered–Robert Frost’s “The Road Not Taken” takes the shopworn metaphor of ife is a journey and makes it memorable. The poem is far richer and more complex than most people think it is. It’s also one of the most misread poems in the English language. By rereading, reflecting upon, and rethinking this beloved poem, we gain new insight into our decision-making process.

Two roads diverged in a yellow wood,
And sorry I could not travel both
And be one traveler, long I stood
And looked down one as far as I could
To where it bent in the undergrowth;

Then took the other, as just as fair,
And having perhaps the better claim,
Because it was grassy and wanted wear;
Though as for that the passing there
Had worn them really about the same,

And both that morning equally lay
In leaves no step had trodden black.
Oh, I kept the first for another day!
Yet knowing how way leads on to way,
I doubted if I should ever come back.

I shall be telling this with a sigh
Somewhere ages and ages hence:
Two roads diverged in a wood, and I–
I took the one less traveled by,
And that has made all the difference.

I have heard this poem quoted in at least three inspirational valedictory addresses by students who had to overcome obstacles and family culture to attend college. Here they were, in their moment of glory, proudly asserting, “I took the road less travelled by, and that has made all the difference.”

Their view of the poem as a celebration of making the unconventional choice is the common one. It is so prevalent, in fact, that when I ask people what the poem is titled (I’ve conducted this test countless times, always with the same results), they reply, “The Road Less Travelled.” In this interpretation, the poem is about a traveler who doesn’t follow the mob but takes the untrodden path. He or she “does it my way.”

But the poem is actually named after the other road, the “Road Not Taken”–the road the traveler doesn’t take, not the road that he does. Furthermore, when you look at the poem closely, you realize that there is no difference between the two roads. While the speaker of the poem first says that he took the road that was “grassy and wanted wear,” upon reflection he acknowledges that there was no difference between the two roads: “Though as for that the passing there/Had worn them really about the same,/And both that morning equally lay. . .”

And yet, this other idea is so ingrained in us that my students often can’t hear it—just as I couldn’t for years. In such situations, my English colleague Donna Richardson (in Visual Paraphrasing of Poetry ) suggests “visually paraphrasing” the poem, and I have started doing this. I will bring a student to the blackboard and, as another student reads the poem aloud, the class instructs him or her in how to draw the road. Ultimately the students have to acknowledge that the roads look more or less the same.

Even more can be achieved through illustrating. The student artists are to illustrate the road of life in its entirety and then figure out where the poet is at different points in the poem. Of course, roads branch off into more roads and the blackboard fills up with lines. Then we locate a past, a present, and a future among those paths.

The past figure (usually a stick figure) is at the first crossroad making a choice. For my new students, the choice that comes most readily to mind is choice of college. They recall what was often a struggle: St. Mary’s is beautiful but it’s remote but it’s cheaper than private liberal arts colleges but it’s not as well known but it’s on the water, etc. At some point in the past they decided which undergrowth to plunge into and sent off their deposit.

The next point of time is the present, the speak remembering back to when he made that decision. This speaker is also thinking about the future and whether he will think then as he thinks now.

He predicts not. My student artists draw one last figure close to the very end of the road (the talented ones put him in a rocking chair). By this point, the speaker predicts, he won’t be acknowledging that the two roads have been worn “really about the same.” Rather, he will be remembering, “I took the one less travelled by and that has made all the difference.” What kind of difference? Well, that opens up a whole new discussion among my students.

And what kind of sigh will he be sighing? I have my students breathe different sighs. There is the sigh of satisfaction (the “I did it my way” sigh). The sigh of regret (“I wish I had it to do over”). The neutral meditative sigh (“hmm, the choices we make when we are young sure have consequences we couldn’t possibly have foreseen”). And others as well.

But of course, the speaker, being in the present, doesn’t know which sigh he will be sighing. He’s just imagining a possible future. In one way, you could say he’s predicting that, in the future, he will look back at a key choice he’s made in the past and lie to himself about the reason he made it. Or if “lie” is to strong, he will color the facts. In this reading, it’s as though the speaker thinks that, as people get older, they become so filled with “could have been” regret that the only way they can live with themselves is by retelling the past in such a way that their choices are validated.

And on and on. Interpretations proliferate like branching roads, and our class discussions always end inconclusively.

If we often misread the poem as an uncomplicated celebration of American individualism, as a patting ourselves on the back for making unconventional choices, I think it’s because Frost deliberately invites us to. He knows the American myth and plays to it. Then, when he has us hooked, he has us look at the paths a second time. And then again. As we reflect, we begin to realize we are not one-dimensional iconclasts (or, to use a key term from this past election, mavericks) but complex human beings.

I do not in any way want to detract from the valedictorians who used this poem to help them fight through family opposition or cultures of poverty and whatever other grassy paths they trod on their way to their moment of triumph. Read in the way that most people read it, the poem can help put spine into a wavering decision. It can contribute to heroic action.

But such thinking can also become a stick to be used against people who don’t branch off into the unknown or pull themselves up by their bootstraps or what have you. And if truth be told, maybe those who claim to have done so are spinning their past. Maybe their choice making wasn’t quite like they remember. Maybe they are rationalizing. Maybe they even judge others because they are afraid they themselves made the wrong choice and have to talk themselves into thinking they made the heroic choice.

This entry was posted in Frost (Robert) and tagged choices, Road Not Taken, Robert Frost. Bookmark the permalink. Comments are closed, but you can leave a trackback: Trackback URL.