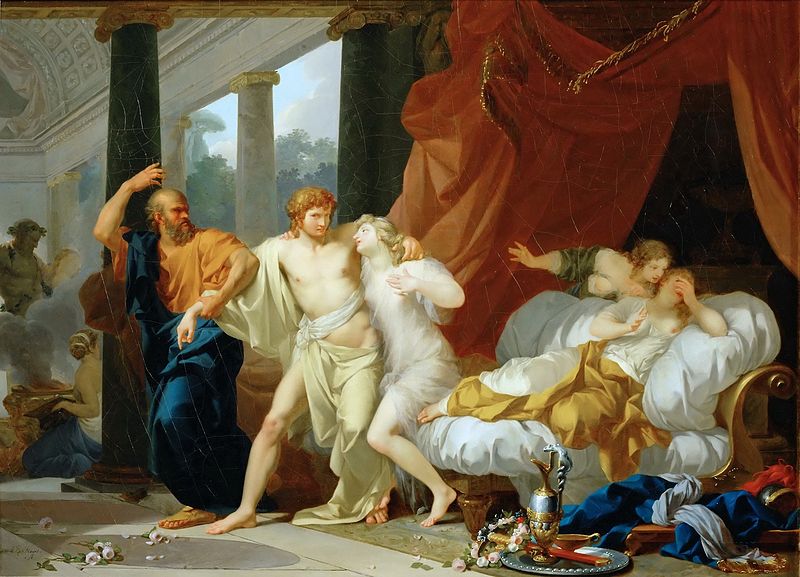 Regnault, “Socrates Tears Alcibiades from the Grasp of Sensual Pleasure”

For years I’ve heard about Plato wanting to kick poets—and artists in general—out of his ideal republic, but I’ve never scrutinized the particular passages. Today I do so.

My first impression upon rereading The Ion and the final book of The Republic is that Socrates loves Homer. He quotes a number of specific passages in his conversation with Ion, a “rhapsode” who is famed for his dramatic readings of Homer.

As a result, I wonder about Socrates’s seriousness.  Is he just undertaking a thought experiment, positing a deliberately perverse argument to see what ideas will emerge?

Michael Taber, a colleague in our Philosophy Department who teaches Plato and Aristotle, helps me out. Apparently The Republic is indeed a thought experiment in which Plato tries to imagine an ideal state. He is not being perverse, however. Rather, he is so worried about the destructive potential of passionate people that he argues that passion must be tightly controlled, if not outright banned. Literature and music are among those things that sway our passions.

If nothing else, The Republic is an indirect testimony to literature’s power. Plato sees poetry as a force that must be corralled.

Before I continue on, it is useful to provide some background on Plato’s argument. Using Socrates as his vehicle, he makes the case that literature is a third order imitation. First there are the eternal forms—say, the idea of a chair. Then there is the manifestation of the form in the world, so that one has a carpenter making a chair. Then the artist comes along and imitates what the carpenter has made.

I worry that Socrates sounds a bit like Thomas Gradgrind from Hard Times in that the Greek philosopher doesn’t regard poets as people who actually do anything useful. Along with carpenters, Socrates mentions charioteers, captains, and doctors, who are all mentioned in Homer’s epics. Homer may dazzle us with all that he knows about these professions, but Socrates uses his descriptions to take him down a peg. We don’t want Homer managing our horses, sailing our ships, or performing surgery, do we? For that matter, wouldn’t we rather have politicians rather than poets running the country?

Then, I said, we must put a question to Homer; not about medicine, or any of the arts to which his poems only incidentally refer: we are not going to ask him, or any other poet, whether he has cured patients like Asclepius, or left behind him a school of medicine such as the Asclepiads were, or whether he only talks about medicine and other arts at secondhand; but we have a right to know respecting military tactics, politics, education, which are the chiefest and noblest subjects of his poems, and we may fairly ask him about them. ‘Friend Homer,’ then we say to him, …’if you are able to discern what pursuits make men better or worse in private or public life, tell us what State was ever better governed by your help? The good order of Lacedaemon is due to Lycurgus, and many other cities great and small have been similarly benefited by others; but who says that you have been a good legislator to them and have done them any good? Italy and Sicily boast of Charondas, and there is Solon who is renowned among us; but what city has anything to say about you?’ Is there any city which he might name?

Socrates then pushes his argument even further. If poets can’t be called upon to rule, how about at least making people more virtuous? Since this is one area where some of us see artists playing a role—Sir Philip Sidney, Matthew Arnold, Wayne Booth, Robin Bates—it’s interesting to see Socrates taking even this claim apart:

But can you imagine, Glaucon, that if Homer had really been able to educate and improve mankind –if he had possessed knowledge and not been a mere imitator –can you imagine, I say, that he would not have had many followers, and been honored and loved by them? Protagoras of Abdera, and Prodicus of Ceos, and a host of others, have only to whisper to their contemporaries: ‘You will never be able to manage either your own house or your own State until you appoint us to be your ministers of education’ –and this ingenious device of theirs has such an effect in making them love them that their companions all but carry them about on their shoulders. And is it conceivable that the contemporaries of Homer, or again of Hesiod, would have allowed either of them to go about as rhapsodists, if they had really been able to make mankind virtuous? Would they not have been as unwilling to part with them as with gold, and have compelled them to stay at home with them? Or, if the master would not stay, then the disciples would have followed him about everywhere, until they had got education enough?

Socrates is right about one thing. There are any number of authors who I would not want to see as ministers of education or, for that matter, classroom teachers. I don’t like how Socrates resorts to a utilitarian argument, however, which reminds me of those state legislators who rail against the liberal arts. Some of them would even be willing to cut philosophy.

So what does Socrates say about what authors do better than the other professions, which is immerse us in the beauties of language and story? Socrates does not merely see this skill as less useful than others but actually as damaging. Literature, as he sees it, prompts us to act irrationally, and the ideal state must be guided by Reason. Poets, unfortunately, target “an inferior part of the soul,” indulging “the irrational nature”:

[T]herefore we shall be right in refusing to admit him into a well-ordered State, because he awakens and nourishes and strengthens the feelings and impairs the reason. As in a city when the evil are permitted to have authority and the good are put out of the way, so in the soul of man, as we maintain, the imitative poet implants an evil constitution, for he indulges the irrational nature which has no discernment of greater and less, but thinks the same thing at one time great and at another small–he is a manufacturer of images and is very far removed from the truth.

As I understand this, Socrates is suspicious of the way that literature immerses us in its fictions rather than allowing us a place to stand outside of reality. We might counter that passionless Reason doesn’t exactly have a stellar record. Pure reason, even if it were possible (and it’s not), would not be a good thing. Here is Socrates setting Reason at war with Emotion and seeing literature as being on the wrong side:

But we have not yet brought forward the heaviest count in our accusation: –the power which poetry has of harming even the good (and there are very few who are not harmed), is surely an awful thing?

Yes, certainly, if the effect is what you say.

Hear and judge: The best of us, as I conceive, when we listen to a passage of Homer, or one of the tragedians, in which he represents some pitiful hero who is drawling out his sorrows in a long oration, or weeping, and smiting his breast –the best of us, you know, delight in giving way to sympathy, and are in raptures at the excellence of the poet who stirs our feelings most.

Yes, of course I know.

But when any sorrow of our own happens to us, then you may observe that we pride ourselves on the opposite quality –we would fain be quiet and patient; this is the manly part, and the other which delighted us in the recitation is now deemed to be the part of a woman.

Now can we be right in praising and admiring another who is doing that which any one of us would abominate and be ashamed of in his own person?

No, he said, that is certainly not reasonable.

Nay, I said, quite reasonable from one point of view.

What point of view?

If you consider, I said, that when in misfortune we feel a natural hunger and desire to relieve our sorrow by weeping and lamentation, and that this feeling which is kept under control in our own calamities is satisfied and delighted by the poets;–the better nature in each of us, not having been sufficiently trained by reason or habit, allows the sympathetic element to break loose because the sorrow is another’s; and the spectator fancies that there can be no disgrace to himself in praising and pitying any one who comes telling him what a good man he is, and making a fuss about his troubles; he thinks that the pleasure is a gain, and why should he be supercilious and lose this and the poem too? Few persons ever reflect, as I should imagine, that from the evil of other men something of evil is communicated to themselves. And so the feeling of sorrow which has gathered strength at the sight of the misfortunes of others is with difficulty repressed in our own.

Ah, so now we’re getting down to the nub of it. Real men, including philosophers, don’t cry. (To riff off of Tom Hanks in A League of Their Own, there’s no crying in philosophy.) Crying is for inferior souls and for women.

Although we as a society have become more open to crying men, I’m struck that literature itself still carries some of these old associations. Women are more likely to major in the English (and the other arts) than men. In my book discussion group, it’s been years since we’ve had a man other than myself attend. Fiction to many men seems impractical and indulgent, not concerned enough with shaping the world.

In defense of the emotions, I note that we don’t have hard evidence that “rational” men have been better at running our republics than “irrational women” would. In fact, I would argue that those who know and honor the emotions, those who dance to Pan pipes and light up at a dramatic reading of Homer, would be better philosopher kings than those steeped only in macho philosophy. And 100 times better than soulless technocrats.

Turning to The Ion, Socrates is a little more subtle in his critique of poetry but makes similar points. The question is whether Ion, as a dramatic reader, owes more to artistic inspiration or to calculated artifice. Socrates gets Ion to admit that his powers stem from inspiration–which is to say, when he is performing, he is in the grip of a divine passion. His power lies in the way he passes that passion along to his auditors.

This seems harmless enough in The Ion, which doesn’t make clear why inspiration is inferior to artifice. It is in The Republic where Socrates discusses the danger of the passions.

In sum, Plato regards literature as a powerful emotional force, and he worries that people will make bad use of that force. Therefore poets need not apply for jobs in the ideal republic.