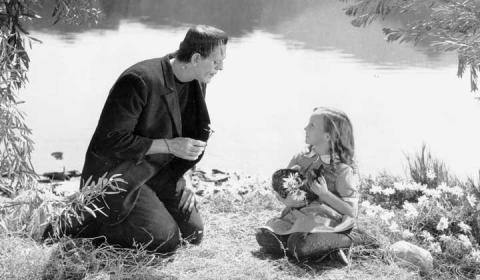 My son Tobias Wilson-Bates, currently a Marion L. Brittain Postdoctoral Fellow at Georgia Tech, recently published a short essay about robotics and literature in a school newsletter. Sign me up immediately for the Proud Fathers Club.

The relationship between machines and literature has long fascinated Tobias, which makes Georgia Tech a good place for him at the moment. As he points out, Mary Shelley anticipated almost 200 years ago problems that we are currently encountering with artificial intelligence.

Tobias is currently teaching a course that “challenges students to engage with the topic of robotics as existing in a cultural network of information.” Among the problems he addresses is whether our artificial creations will reflect our social failures. In the article, which I’ve shared below, he alludes to the following passage, where Dr. Frankenstein’s “monster” explains how he began his war against humankind:

Here I paused, not exactly knowing what path to pursue, when I heard the sound of voices, that induced me to conceal myself under the shade of a cypress. I was scarcely hid when a young girl came running towards the spot where I was concealed, laughing, as if she ran from someone in sport. She continued her course along the precipitous sides of the river, when suddenly her foot slipped, and she fell into the rapid stream. I rushed from my hiding-place and with extreme labor, from the force of the current, saved her and dragged her to shore. She was senseless, and I endeavored by every means in my power to restore animation, when I was suddenly interrupted by the approach of a rustic, who was probably the person from whom she had playfully fled. On seeing me, he darted towards me, and tearing the girl from my arms, hastened towards the deeper parts of the wood. I followed speedily, I hardly knew why; but when the man saw me draw near, he aimed a gun, which he carried, at my body and fired. I sank to the ground, and my injurer, with increased swiftness, escaped into the wood.

This was then the reward of my benevolence! I had saved a human being from destruction, and as a recompense I now writhed under the miserable pain of a wound which shattered the flesh and bone. The feelings of kindness and gentleness which I had entertained but a few moments before gave place to hellish rage and gnashing of teeth. Inflamed by pain, I vowed eternal hatred and vengeance to all mankind.

It has been quite a year for artificial intelligence. Google has continued its rapid movement toward integrating neural networks into the heart of its information empire; in March, its A.I., AlphaGo, defeated world champion Lee Se-dol in the complex game of Go. The excitement seems to lend credibility to Ray Kurzweil’s prediction that machines will attain consciousness by 2029.

Given all the recent success, it came as quite a shock this week when Microsoft’s artificially intelligent chatbot, Tay, failed about as remarkably as possible at enacting the part of a “chill millennial.”

Within 24 hours she was posting an embarrassing slew of racist, sexist, incestuous and genocidal messages that were gleefully harvested by both social media users and news media alike.

Journalists have posed a number of arguments about the meaning of Tay’s corruption, but whatever the motives were, they are likely more complex than the theory of Microsoft’s vice president of research Peter Lee, who wrote off the incident as “malicious intent that conflicts with our values and principles.” In fact, the likelihood of an attack was so strong that Microsoft had already produced extensive firewalls (which proved ultimately ineffective) for just such a circumstance.

In other words, everyone involved knew beforehand that new life is prone to attacks. Indeed, the scenario goes back at least as far as the first work of science fiction, Mary Shelley’s Frankenstein (1818). In the novel, the creature is abandoned by its maker and wanders aimlessly until it is attacked for saving a child from drowning. The creature is rejected by human society and does monstrous things in return. Of course, one could argue that its revenge is merely its adaptation to the very forms of violence it experiences from the humans it meets.

Tay, as an artificial being subjected to the group politics of social media, occupies the same position as a sort of “human” existing to both reestablish the humanity of her peers while also bringing the category into question. Whether they mean to or not, Microsoft is deconstructing what it means to be human and, as such, creating a monster.

As intelligent machines are increasingly woven into the fabric of the modern world, areas of knowledge associated with the humanities are becoming structurally necessary for producing and integrating new technologies. Tay was not a technological failure but a sociological one. It is to be hoped that in turning toward increasingly autonomous social machines, we draw upon the ethics discovered in the careful examination of narrative and social patterns.

Added note: Just as Mary Shelley offers an alternative educational model for how Frankenstein’s monster could have been raised, so Tobias cites his colleague Mark Riedl for his attempts to align robots with our ethical ideals. You can go to “Quixote” to see how Riedl is “programming robots to read stories that may act as a user manual for ethical human behavior in real-life scenarios.”