Resisting the Witchery of Nuclear Warfare 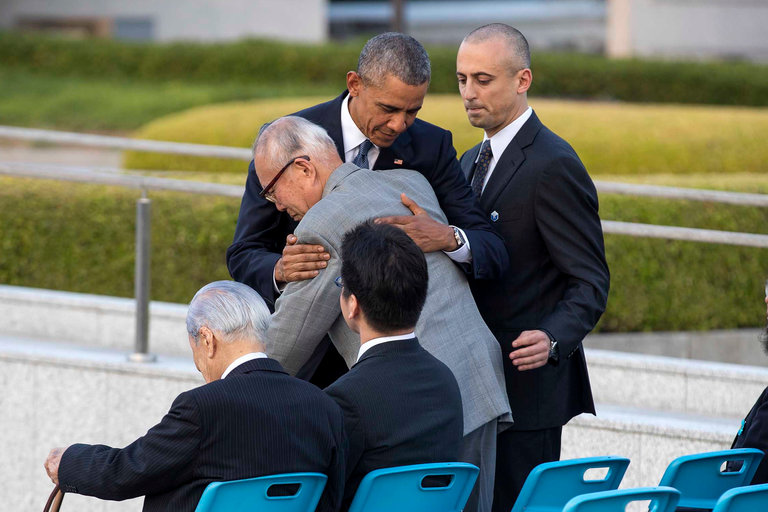 Obama embraces a Hiroshima survivor during his recent visit

Today, in a historically significant moment, Barack Obama will be the first American president to visit Hiroshima. Only one country has ever dropped nuclear weapons on another, and Obama will be acknowledging that fact. In doing so, he will be walking a delicate line on a host of political and diplomatic fronts.

To honor the occasion, I look at the unique way that one of America’s greatest Native American authors regards the nuclear bomb. In her 1976 novel Ceremony, Leslie Marmon Silko of the Laguna Pueblo explains that it is the result of witchery.

The novel is about an Indian war veteran who returns to the United States after having survived the Bataan death march. During this 62 mile trek through the Philippines, 2,500–10,000 Filipino and 100–650 American prisoners of war died. Tayo, the protagonist, sees the Japanese kill his wounded cousin Rocky during the march, and he returns to the United States with an acute case of PTSD as well as survivor’s guilt.

Tayo visits two medicine men, who see him as victimized by the world’s witchery. As Pueblo culture sees it, witches are the source of evil in our lives. (The Judeo-Christian tradition, by comparison, attributes evil to Adam and Eve’s fall.) Why are Americans set against the Japanese and European Americans against Native Americans? Medicine man Betonie recounts a darkly humorous origins story in which we see a malevolent witch inventing white people to win the prize of “biggest baddest witch” at a witches convention. These white people invade the Americas, devastate the region environmentally, and invent the nuclear bomb.

Ceremony is about Tayo’s healing quest, which in the end becomes a healing quest for the entire world. We are all caught in the grip of “witchery,” and Silko wants to know what we can do to shake free. Tayo provides a model in the way he reconnects with the land. In the climactic finale, Silko tests how deep his healing goes by having him undergo a test at an abandoned uranium mine. The mine is one way in which the Pueblo are, at least indirectly, connected with Hiroshima and Nagasaki.

We learn, early on, that there should have been no racial animosity between the Japanese and the Native Americans because they are related. Tayo, ordered to shoot some Japanese prisoners, cannot do so because he believes he sees his uncle Josiah among them. Although he is diagnosed as having jungle fever, what he sees is later confirmed:

“The Japanese,” the medicine man went on, as though he were trying to remember something. “It isn’t surprising you saw him [Josiah] with them. You saw who they were. Thirty thousand years ago they were not strangers. You saw what the evil had done: you saw the witchery ranging as wide as this world.”

Betonie concludes his origins story by describing the invention of the atom bomb:

They [the whites] will take this world from ocean to ocean
they will turn on each other
they will destroy each other
Up here
in these hills
they will find the rocks,
rocks with veins of green and yellow and black.
They will lay the final pattern with these rocks
they will lay it across the world
and explode everything.

Set in motion now
set in motion
To destroy
To kill
Objects to work for us
objects to act for us
Performing the witchery
for suffering
for torment
for the still-born
the deformed
the sterile
the dead.

Betonie, who has seen the wider world, knows about atomic warfare. He is therefore better able to help Tayo than the more cloistered Ku’oosh, the tribal medicine man to whom Tayo first goes for help. Ku’oosh turns to ancient Pueblo rituals to cure Tayo’s PTSD and, in the process, asks him if he has killed anyone in the war. Tayo’s question– “what if I didn’t know I killed one?”–confuses Ku’oosh:

But the old man shook his head slowly and made a low humming sound in his throat. In the old way of warfare, you couldn’t kill another human being in battle without knowing it, without seeing the result, because even a wounded deer that got up and ran again left great clots of lung blood or spilled guts on the ground. That way the hunter knew it would die. Human beings were no different. But the old man would not have believed white warfare—killing across great distances without knowing who or how many had died. It was all too alien to comprehend, the mortars and big guns; and even if he could have taken the old man to see the target areas, even if he could have led him through the fallen jungle trees and muddy craters of torn earth to show him the dead, the old man would not have believed anything so monstrous. Ku’oosh would have looked at the dismembered corpses and the atomic heat-flash outlines, where human bodies had evaporated, and the old man would have said something close and terrible had killed these people. Not even oldtime witches killed like that.

In the finale at the uranium mine, Tayo has a chance to kill his old time nemesis Emo, a brutal Indian who is trying to kill him and, in the process, is torturing and killing other Indians. If Tayo is unable to resist the impulse to do so, then his healing will have failed and he will succumb to the witchery. He offers hope for all of us in that he is able to resist:

He moved back into the boulders. It had been a close call. The witchery had almost ended the story according to its plan; Tayo had almost jammed the screwdriver into Emo’s skull the way the witchery had wanted, savoring the yielding bone and membrane as the steel ruptured the brain. Their deadly ritual for the autumn solstice would have been completed by him. He would have been another victim, a drunk Indian war veteran settling an old feud…

Because of Tayo’s ability to avoid being caught up in the madness of violence, the witchery collapses in on itself: the four Indians who have been searching for him instead turn on each other. Tayo, meanwhile, returns to his community healed, and we are told that—at least for the moment—the witchery has been defeated. The book ends with this poem:

Whirling darkness
started its journey
with its witchery
and
its witchery
has returned upon it.

Its witchery
has returned
into its belly.

Its own witchery
has returned
all around it.

Whirling darkness
has come back on itself.
It keeps all its witchery
to itself.

It doesn’t open its eyes
with its witchery.

It has stiffened
with the effects of its own witchery.

There are many ways, of course, in which the witchery is still alive, and the presumptive GOP nominee has even refused to disavow using nuclear weapons in the world’s conflicts. Obama, however, with his dream of a world free of nuclear weapons, is taking a tiny step against the witchery with his visit.

We shouldn’t underestimate the importance of such a step. Our only hope is to push back against the witchery in whatever form it takes.