Summertime and the Living Is Easy 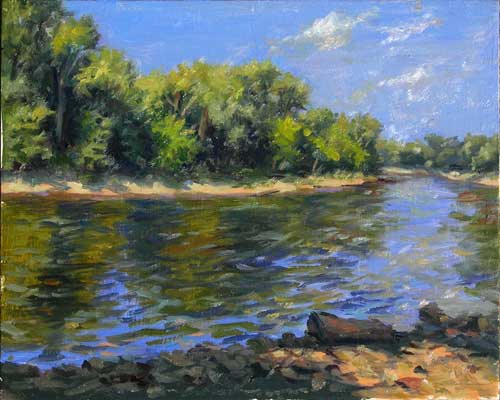 My friend Jim Bershon, retired dental surgeon and film fantatic (that’s how we met), took me for a ride on his boat last week and we celebrated what for me was the final day of the summer. Jim let down anchor in a cove off Canoe Neck Creek on the northern side of St. Clement’s Bay (on the Potomac River) and we dined on Irish Dubliner cheese with pita bread, followed by shrimp salad with grapes, walnuts, and yellow peppers over organic spring mix greens. Jim, who knows his wines very well, also served up a recent Italian Pinot Grigio.

As we ate, a great blue heron rowed its way across the sky and a bald eagle and an osprey had a spat. Afterwards, as the boat swung from its anchor, we lay back and watched large white clouds sail across a blue sky. We were there all afternoon.

The moment reminded me of one of the most idyllic scenes in all of literature, the famous opening to Huckleberry Finn’s chapter 19. Read it and then, before your summer is over, figure out a way to have a comparable experience.

Two or three days and nights went by; I reckon I might say they swum by, they slid along so quiet and smooth and lovely. Here is the way we put in the time. It was a monstrous big river down there — sometimes a mile and a half wide; we run nights, and laid up and hid daytimes; soon as night was most gone we stopped navigating and tied up — nearly always in the dead water under a towhead; and then cut young cottonwoods and willows, and hid the raft with them. Then we set out the lines. Next we slid into the river and had a swim, so as to freshen up and cool off; then we set down on the sandy bottom where the water was about knee deep, and watched the daylight come. Not a sound anywheres — perfectly still — just like the whole world was asleep, only sometimes the bullfrogs a-cluttering, maybe. The first thing to see, looking away over the water, was a kind of dull line — that was the woods on t’other side; you couldn’t make nothing else out; then a pale place in the sky; then more paleness spreading around; then the river softened up away off, and warn’t black any more, but gray; you could see little dark spots drifting along ever so far away — trading scows, and such things; and long black streaks — rafts; sometimes you could hear a sweep screaking; or jumbled up voices, it was so still, and sounds come so far; and by and by you could see a streak on the water which you know by the look of the streak that there’s a snag there in a swift current which breaks on it and makes that streak look that way; and you see the mist curl up off of the water, and the east reddens up, and the river, and you make out a log-cabin in the edge of the woods, away on the bank on t’other side of the river, being a woodyard, likely, and piled by them cheats so you can throw a dog through it anywheres; then the nice breeze springs up, and comes fanning you from over there, so cool and fresh and sweet to smell on account of the woods and the flowers; but sometimes not that way, because they’ve left dead fish laying around, gars and such, and they do get pretty rank; and next you’ve got the full day, and everything smiling in the sun, and the song-birds just going it!

A little smoke couldn’t be noticed now, so we would take some fish off of the lines and cook up a hot breakfast. And afterwards we would watch the lonesomeness of the river, and kind of lazy along, and by and by lazy off to sleep. Wake up by and by, and look to see what done it, and maybe see a steamboat coughing along up-stream, so far off towards the other side you couldn’t tell nothing about her only whether she was a stern-wheel or side-wheel; then for about an hour there wouldn’t be nothing to hear nor nothing to see — just solid lonesomeness. Next you’d see a raft sliding by, away off yonder, and maybe a galoot on it chopping, because they’re most always doing it on a raft; you’d see the axe flash and come down — you don’t hear nothing; you see that axe go up again, and by the time it’s above the man’s head then you hear the k’chunk! — it had took all that time to come over the water. So we would put in the day, lazying around, listening to the stillness.

My colleague Ben Click, our Twain expert, calls this “aguably the greatest opening of a chapter in all of literature.” When I asked him why, he had this to say:

I guess because it captures the Edenic state that two human beings can achieve in nature–far from the damaging influence of society.  Plus, the prose is sublime, moving as effortlessly as the river itself.  Twain brings the reader to share that state of perfection with Jim and Huck in wonder:  “It’s lovely to live on a raft.”  As they contemplate the vastness of the sky “speckled with stars” in their innocent state, Jim suggests that they were made, implying a higher being. Huck, on the other hand, claims that they just happened but ultimately realizes that Jim’s cosmology might just be true.

Of course their revery and pure state can only last so long as the beautiful scene is disrupted by the duke and the king.

A note on the artist:

A note on the artist: More of Jeffrey Smith’s paintings and his reflections can be found at jeffreysmithart.com/mississippi-river-reflections.