Rain Soft as the Fall of Moccasins 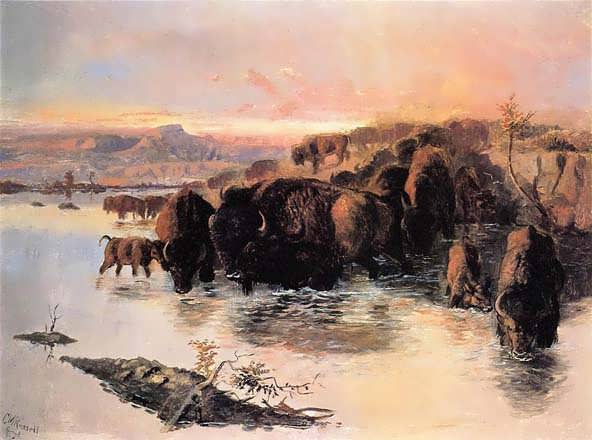 Publishing Note: For five days beginning today, the ebook version of How Beowulf Can Save America: An Epic Hero’s Guide to Defeating the Politics of Rage is available for free to anyone who can download to a Kindle. (The offer lasts through Thursday.) Please take advantage and also tell your friends about the offer. Go to the icon in the upper corner of this blog or click here.

Rather than only despair over the devastation that whites have visited upon nature—Oliver describes the horrific recreational slaughter of buffalo in her poem—she talks about what one must do to “coax [the buffalo] out again.” The answer lies in “the people dancing.”

For the Sioux, every being shares the same spiritual essence, called Wakan Tanka, which is ritually honored through dancing and other ways. For Oliver, her dance is her poem and her role as a metaphorical dancer is to “notice” (a word that appears repeatedly throughout the poem) and tell us what she sees. Put another way, the poet is a seer who uses words to convey her vision. The tongue, Oliver says, is “the sweetest meat.”

She notices the tracks of the “powerful bawling beasts” caused by their droppings in the prairie grass. She also notices the ecosystem that grew up around the buffalo herds. Reading the journal of  Meriwether Lewis (of the Lewis and Clark Expedition), she takes note when he describes a sparrow’s nest woven from buffalo hair.

Oliver is identifying with Lewis here, someone else who noticed things. But she also identifies with the day-old chicks that he observed. Even though they have “left the perfect world” and fallen into “the perils/of this one,” they are also lying in “flowered fields.” In other words, our world is filled with both immense beauty and terrible danger, and it is our responsibility to record what has passed and to “notice” what can still be seen. We are called upon to be as vulnerable and open as young chicks when we observe.

The poem ends on a visionary note: Oliver dreams about a newly born red buffalo calf being tongued by its mother “in the fragrant grass/in the wild domains,” and she wants to enter this communion. In the vision of perfect peace and tranquility that is the dream and the poem, that which has “gone away into the earth to hide” momentarily flares forth. Through our imaginations, it is born again. Oliver’s intense longing assures us that “nothing can die,” despite all the damage done by the shooting train passengers of our world. She can see the ghosts of the past and helps us to see them as well.

Where so many millions of powerful bawling beasts
lay down on the earth and died
it’s hard to tell now
what’s bone, and what merely
was once.

The golden eagle, for instance,
has a bit of heaviness in him;
moreover the huge barns
seem ready, sometimes, to ramble off
toward deeper grass.

1805
near the Bitterroot Mountains:
a man named Lewis kneels down
on the prairie watching

a sparrow’s nest cleverly concealed in the wild hyssop
and lined with buffalo hair. The chicks,
not more than a day hatched, lean
quietly into the thick wool as if
content, after all,
to have left the perfect world and fallen,

helpless and blind
into the flowered fields and the perils
of this one.

In the book of the earth it is written:
nothing can die.

In the book of the Sioux it is written:
they have gone away into the earth to hide.
Nothing will coax them out again
but the people dancing.

Said the old-timers:
the tongue
is the sweetest meat.

Passengers shooting from train windows
could hardly miss, they were
that many.

Afterward the carcasses
stank unbelievably, and sang with flies, ribboned
with slopes of white fat,
black ropes of blood – hellhunks
in the prairie heat.

Have you noticed? how the rain
falls soft as the fall
of moccasins. Have you noticed?
how the immense circles still,
stubbornly, after a hundred years,
mark the grass where the rich droppings
from the roaring bulls
fell to the earth as the herd stood
day after day, moon after moon
in their tribal circle, outwaiting
the packs of yellow-eyed wolves that are also
have you noticed? gone now.

Once only, and then in a dream,
I watched while, secretly
and with the tenderness of any caring woman,
a cow gave birth
to a red calf, tongued him dry and nursed him
in a warm corner
of the clear night
in the fragrant grass
in the wild domains
of the prairie spring, and I asked them,
in my dream I knelt down and asked them
to make room for me.