Twain Was No Racist (Not Even Close) 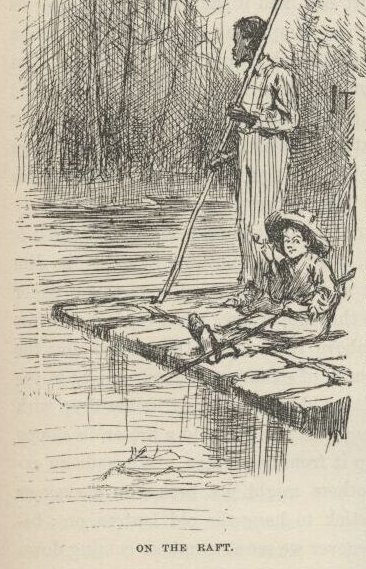 “I hope that like Mark Twain, 100 years from now people will see my work and think, ‘Wow. That is actually pretty racist.'”
–Tina Fey accepting the Mark Twain Prize for American Humor

Thanks to a visiting lecturer in our Mark Twain series, I have a new understanding of Huckleberry Finn that is exciting me a great deal.Like many readers, I have problems with the ending of the book when Tom Sawyer shows up and makes a joke out of Jim’s captivity.Gregg Camfield of the University of California at Merced, however, argues that this ending situates the book in a time and setting that Mark Twain found particularly depressing: the years following 1877 (Twain’s novel was published in 1884) when southern whites were rolling back the civil rights achieved under the Reconstruction.

According to Camfield, here’s how this historical period shows up in Twain’s novel. Robbing the newly freed slaves of their rights was done in the name of the chivalric way of life that supposedly reigned in the South prior to the Civil War.  Segregationists came to see the antebellum South as a place where the high-minded ideals of Sir Walter Scott reigned, a myth that one can see expressed in D. W. Griffth’s racist masterpiece Birth of a Nation. This drama shows up in Tom’s invoking romantic works to keep enslaved a man who is technically free.  He is a white playing games with a person of color who should be fully respected as an individual.

This is the civilization that Huck runs away from at the end of the book. Those who attack Huckleberry Finn for its racism don’t mention this.I suppose that one can criticize Twain for having Huck “light out for the Territory” rather than grapple with the “sivilized” segregation of the time period. We feel that he shouldn’t cede ground to Tom but stand in his loyalty to Jim.  But social circumstances are against him, and one can sympathize with how demoralized Twain felt.After all, he had just seen many of the gains achieved by the bloodiest war of the 19th century wiped out.The reversal was so complete that blacks wouldn’t see for another 80 years (!) rights they had once enjoyed.

If one wants a more overt statement of Twain’s pessimism on race issues, one can turn to Pudd’nhead Wilson (1893-94). But Camfield points out that Twain was already moving strongly in that direction in Huckleberry Finn.

Camfield’s discussion of Huckleberry Finn occurred within a lecture on how Twain arrived at the position that it was all right to tell principled lies.Camfield told us about a college lecture that Twain delivered in which he said, among other things, “I recon you ain’t used to lying . . . what you want is practice.”Huck, of course, is famous for his lying (it’s a trait that he shares with his literary prototype, Odysseus), and Camfield argues that Twain reluctantly came to the conclusion that, when a society’s values are horribly skewed, the principled lie may be necessary.

My own feeling about lying is that of Marlow in Heart of Darkness.Towards the end, immediately before recounting how he himself came to tell a lie, he says, “You know I hate, detest, and can’t bear a lie, not because I am straighter than the rest of us, but simply because it appalls me. There is a taint of death, a flavour of mortality in lies — which is exactly what I hate and detest in the world — what I want to forget. It makes me miserable and sick, like biting something rotten would do.”

For me, lies undermine the foundations upon which society rests.If we can’t be true to our word, then language loses all meaning.In Twain’s vision, however, if official society is operating on the basis of lies, then lies may be necessary to survive within it.The south’s lie was that, in antebellum Camelot before the “war of northern aggression,” blacks were happy in their subjection.

Twain’s pessimism about this lie shows up particularly vividly in the apocalyptic novel Connecticut Yankee in King Arthur’s Court 1889). There he exposes Camelot for what it really is, a mixture of brutality, superstition and (in the case of Merlin) cynical manipulation.  He may well be referring to America’s slave history when he shows how the Yankee fails in his brutal attempts to wipe out subjugation of the population.  The freedom that the serfs and slaves achieve under Hank’s rule is only temporary.

Rather than calling Twain a racist, we should be impressed that he attacked southern racism as strongly as he did.

Added notes: You can go here to begin reading my series of five posts about debates about race in Huckleberry Finn and how the book helped me survive the school desegregation battles in rural Tennessee in 1963.

And just so I don’t end this post on an entirely dark note, here’s the best line from the Tina Fey event.It comes from Betty White:

“I’m the only one here who actually dated Mark Twain. And I can tell you they didn’t call him Samuel Longhorne Clemens for nothing.”