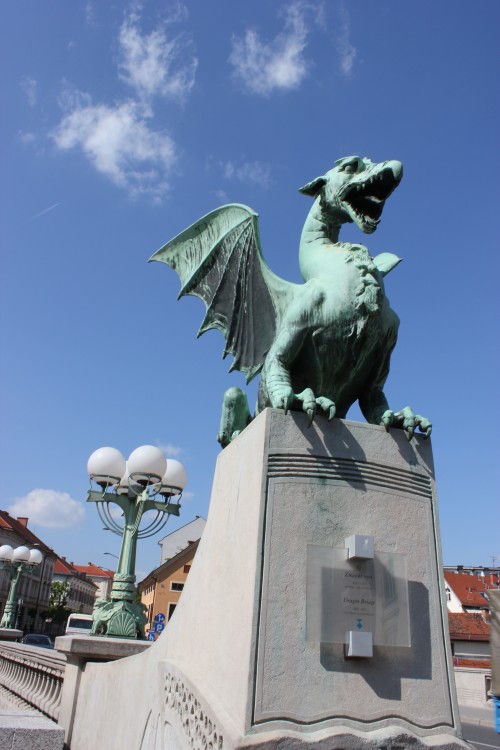 Yesterday was V-E Day (Victory in Europe), which gives me an opportunity to tell you about my 15 minutes of fame. I was in Slovenia on a Fulbright Scholarship in 1994-95, which means I was there for the 50th anniversary of V-E Day. Standing on a platform high in the air, I read Walt Whitman’s “Oh Captain, My Captain” to a packed square in Ljubljana along with a national television audience. Here’s how it came about.

The celebration was held in Congressional Square and it had something for everyone. Slovenia is known for its Alpine climbers so mountain climbers scaled the buildings surrounding the square. Slovenia’s famous white Lipizzaner horses trotted around, people parachuted down from military planes flying overhead, World War II partisans and concentration camp survivors paraded through, and the national orchestra and opera singers performed on the steps of the Parliament building. Overlooking it all and holding hunting horns were various Miss Slovenias, one on each of the four buildings. (The horns were ceremonial so they didn’t blow them.) Then, for the grand finale, there was poetry.

I wasn’t the only reader. There were six of us, representing six of the countries that had been involved in defeating the Germans, and each of us was given a poem from our country to deliver. We stood on a platform 20-feet high under the Slovene word for victory–ZMAGA–in large cutout letters. More on this in a moment.

We were treated very well. Prior to the event, they took us out for a special meal and then to a sound studio, where we were recorded.  (They were worried about acoustics so we lip-synched the actual performance.) We were driven by a minister’s chauffeur so I now know what it’s like to go really fast,  and, because they wanted us all dressed the same, they made us special suits. The men’s were blue and very sharp. The women’s were brown and less so.

I can’t name all the poems, but the poets were Russia’s Vladimir Mayakovsky, Spain’s Garcia Lorca (included because he opposed and was killed by the fascists), France’s Paul Éluard (“Liberté”), Britain’s Shakespeare (Henry V’s “Once more into the breach dear friends” speech), America’s Whitman, and, capping it all off, Slovenia’s France Prešeren, their national poet. This last poem, which was read by a 16-year-old Slovene girl, ended the ceremony.

There are stories to go along with some of the poems. For some reason they chose a Scottish nationalist to read the Shakespeare, and he complained to me about the English nationalism of such lines as

Once more unto the breach, dear friends, once more
Or close the wall up with our English dead!

The game’s afoot: Follow your spirit; and upon this charge,
Cry “God for Harry! England! and Saint George!”

I pointed out that it could have been worse. Shakespeare pokes fun at the non-English Brits elsewhere in the play–which is to say, the Welsh, the Irish, and the Scots—and our reader could have been chosen to read Captain Macmorris with a full Scottish brogue.

The woman who read Éluard was, for some reason, not French but French Canadian. We weren’t sure why she was chosen but speculated that, since Canada also fought in the war, they thought they were getting two countries for the price of one.

I was curious as to why Whitman’s poem had been chosen and learned that, when Marshal Tito died in 1980, Jimmy Carter presented the poem to the country. I found the selection appropriate as it acknowledges both victory and loss. Yugoslavia’s deaths during the war were staggering—worse than the Soviet Union’s—with one out of eight dying.

It was also appropriate that a young Slovene read the closing poem, signaling that the country was now looking toward the future. After all, Slovenia in 1994 was barely four years old as a country, having successfully broken away from Yugoslavia in 1991. I wondered if some of the celebration was directed more at its recent freedom than at its freedom from the Germans 50 years before.

I looked down over the square from my lofty height and read “O Captain, my captain, our fearful trip is done” with great fanfare. One of my students afterwards told me I was too melodramatic, but it’s hard to be anything else given such lines as

But O heart! heart! heart!
O the bleeding drops of red,
Where on the deck my Captain lies,
Fallen cold and dead.

The upshot of it was that, for two weeks afterwards, people would come up to me in buses and on the streets and tell me they had seen me.

I was impressed at the time that poetry would be given such a prominent role. Slovenes have a special reverence for poetry because they are in part defined by their language. In the 19th century, as part of the Slovene nationalist movement triggered by Napoleon, Prešeren showed the world that Slovene wasn’t just some hick dialect but a national language capable of producing great art. As a result, there are many streets throughout the country named after Slovene poets.

Come to think of it, poetry has been raised in stature recently in our country with its inclusion in Clinton’s and both of Obama’s inaugurations.

So there you have the story of my 15 minutes. Enough to last a lifetime.