Waiting for the Tide to Turn 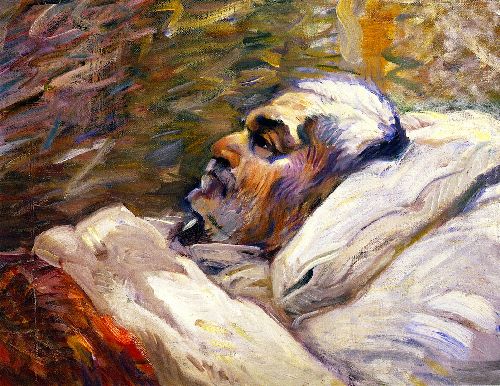 We continue in a suspended state as my father slowly declines. Wednesday night we all rushed to the hospital at 2 because it appeared that the end with near, only to return home to bed at 4. (Thankfully my mother, who is sleeping in the hospital room, was subsequently able to sleep  until 7:30.)  My father’s lungs are filling up and his brain deteriorating but he continues to hang on.

“This is the hour of lead,” I find myself thinking, quoting the Emily Dickinson poem “After great pain a formal feeling comes.” Dickinson is describing what it is like to sink into depression and says that the experience is remembered afterwards

As freezing persons recollect the snow–
First chill, then stupor, then the letting go.

There is indeed some of this psychological process at work with us—we are experiencing, if not a stupor, then at least a suspended state. I sense, however, that we are also beginning to surrender to it rather than fight it. It no longer chills.

And then there are a couple of stanzas from Rime of the Ancient Mariner that seem to apply. Such as:

Day after day, day after day
We stuck, nor breath nor motion
As silent as a painted ship
Upon a painted ocean.

Fortunately, we are not bearing this alone. I think of Mr. Barkis’ deathbed scene in David Copperfield where friends and family gather to support each other, and this is happening with us as well. In the book Peggotty, David’s old nurse, has married Barkis, and David returns to comfort her when her husband is dying.

The passage also has me wondering whether my father will go “out with the tide,” as Peggotty’s fisherman brother puts it:

Peggotty took me in her arms, and blessed and thanked me over and over again for being such a comfort to her (that was what she said) in her distress. She then entreated me to come upstairs, sobbing that Mr. Barkis had always liked me and admired me; that he had often talked of me, before he fell into a stupor; and that she believed, in case of his coming to himself again, he would brighten up at sight of me, if he could brighten up at any earthly thing.

The probability of his ever doing so, appeared to me, when I saw him, to be very small. He was lying with his head and shoulders out of bed, in an uncomfortable attitude, half resting on the [money] box which had cost him so much pain and trouble…

‘Barkis, my dear!’ said Peggotty, almost cheerfully: bending over him, while her brother and I stood at the bed’s foot. ‘Here’s my dear boy—my dear boy, Master Davy, who brought us together, Barkis! That you sent messages by, you know! Won’t you speak to Master Davy?’

He was as mute and senseless as the box, from which his form derived the only expression it had.

‘He’s a going out with the tide,’ said Mr. Peggotty to me, behind his hand.

My eyes were dim and so were Mr. Peggotty’s; but I repeated in a whisper, ‘With the tide?’

‘People can’t die, along the coast,’ said Mr. Peggotty, ‘except when the tide’s pretty nigh out. They can’t be born, unless it’s pretty nigh in—not properly born, till flood. He’s a going out with the tide. It’s ebb at half-arter three, slack water half an hour. If he lives till it turns, he’ll hold his own till past the flood, and go out with the next tide.’

The Dickens scene ends beautifully, with the taciturn Barkis momentarily regaining consciousness to make two final affirmations. In one, he talks of the worth of his wife. In the second, he repeats the indirect marriage proposal that he once relayed to Peggotty through David—only now the words take on a secondary meaning:

We remained there, watching him, a long time—hours. What mysterious influence my presence had upon him in that state of his senses, I shall not pretend to say; but when he at last began to wander feebly, it is certain he was muttering about driving me to school.

‘He’s coming to himself,’ said Peggotty.

Mr. Peggotty touched me, and whispered with much awe and reverence. ‘They are both a-going out fast.’

I was on the point of asking him if he knew me, when he tried to stretch out his arm, and said to me, distinctly, with a pleasant smile:

And, it being low water, he went out with the tide.

A similar loving community has gathered around my parents as we greet a constant stream of former students, colleagues, and friends. They are all affirming their love and respect.

There is no doubt that my father thinks that there is “no better woman anywhere” than my mother, even though he can no longer express it. Now he is only waiting for the tide to turn.