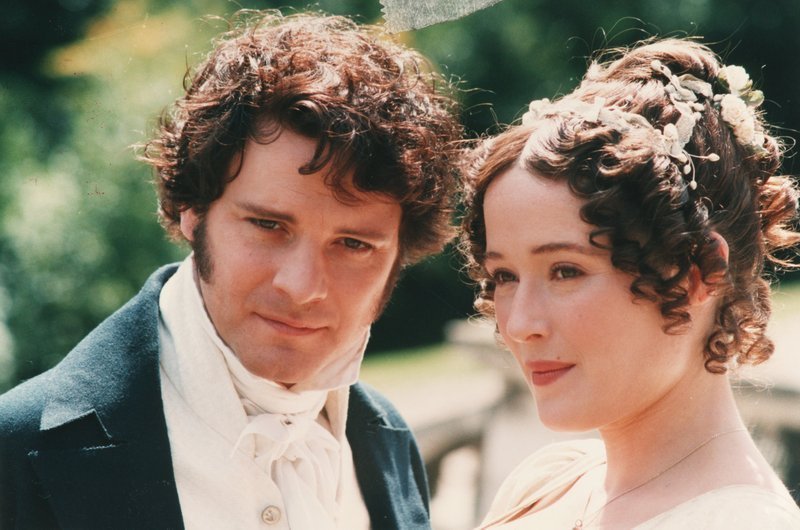 Firth and Ehle as Darcy and Elizabeth

This coming fall, for the first time, I will teach Pride and Prejudice in my Jane Austen First Year Seminar (Topic: “Austen and the Dating Game”). Because the course is designed to teach “the four fundamental skills”—writing, oral presentation, critical thinking, and information literacy—we are advised to cut back on content in order to spend more time on method instruction. As a result I have limited myself to teaching five of her six major novels. In the past, I have skipped the one I figured everyone had already read.

But the students love Elizabeth Bennet and her relationship with Darcy and want to talk about it. Here’s my theory about what makes the couple so magical.

I begin with an explanation by Thomas Moore in Soul Mates as to why we are so drawn to the idea of marriage itself:

In a sense, the person we marry offers us an opportunity to enter, explore, and fulfill essential notions of who we are and who we can be.  In this sense marriage is not fundamentally the relationship between two persons, but rather an entry into destiny, an opening to the potential life that lies hidden from view until evoked by the particular thoughts and feelings of marriage.

So how do Elizabeth and Darcy represent for each other an opening into destiny. Darcy, I think, represents for Elizabeth the social base she needs for her intelligence and sprightliness to move powerfully in the world.  Given her beauty, forcefulness, intelligence, wit, and strong values, Elizabeth, more than any other Austen heroine, can make a significant impact on the larger society.  Becoming wife of a society leader and patroness of a county will allow her to exercise her leadership abilities.

For Darcy, on the other hand, Elizabeth represents the liveliness and humor that will make his spirit soar.  She will also draw him out of his upper-class isolation into a network of economic and social relationships that in Austen’s time were redefining England.  Elizabeth dreams of a self that Darcy will help her achieve, and Darcy does the same.

Darcy and Elizabeth have become a legendary couple for readers because they evoke a wholeness for which we all long.  To see how this dynamic works in more recent times, think of some of our great movie duos. In Casablanca, the dark and brooding Humphrey Bogart is lifted up by the ethereal beauty of Ingrid Bergman while she finds in him a solidity lacking in Paul Henreid, who plays her fair-haired, too conventionally handsome husband.  In Pretty Woman, Julia Roberts’ little girl smile plays dynamically against the lines of Richard Gere’s world weary face. In Annie Hall, Diane Keaton’s upbeat WASP cheerfulness makes for a fascinating contrast with Woody Allen’s urban Jewish cynical and self-deprecating humor.

Some directors, often for comic purpose, will work against gender stereotypes, such as playing Katherine Hepburn’s masculine qualities against Cary Grant’s effeminate ones (Bringing Up Baby).  When there is not this drama of opposites, the potential isn’t as evident.  Tom Hanks and Meg Ryan don’t work for me as a couple because both seem so nice.  Similarly (returning to the novel), Jane and Bingley may be too much alike to capture our imaginations.

The following contrasts show up between Elizabeth and Darcy:

If, together, Elizabeth can develop her Darcy side and Darcy his Elizabeth side, how are they lacking before their union? Let’s look at Elizabeth first.

For all her virtues, Elizabeth lacks grounding and fails to acknowledge her precarious economic situation.  Perhaps because she is reacting against her mother, she does not take marriage seriously enough.

This isn’t entirely bad.  We’re glad she is not a mercenary like Caroline Bingley (and, to a lesser extent, Charlotte Lucas).  We certainly don’t want her to marry Collins or even an arrogant Darcy.  However, Elizabeth gives the impression that she can maintain a satiric distance from the whole messy business of marriage.

Yet Austen saw marriage as the only viable career path for a gentleman’s daughter, showing us the humiliations of being a governess in Emma (through Jane Fairfax) and of being a dependent in Sense and Sensibility, Mansfield Park, and Persuasion.  Elizabeth’s future, not to mention her family’s, may depend upon her marrying.  Others, particularly Charlotte, are far wiser to the ways of the world than she is.

Elizabeth is her father’s daughter in this regard, and he serves as a valuable object lesson.  Irresponsible himself, he has failed to provide for the futures of his daughters or his wife.  When Elizabeth warns him that Lydia’s irresponsible behavior threatens the marriage prospects of her sisters, he can’t see the danger.  Instead he asserts, idealistically but impracticably, that Jane and Elizabeth’s qualities alone will draw truly worthy men.

Elizabeth is similarly impractical when she fails to heed Charlotte’s warning that Jane’s qualities alone are not enough to capture Bingley.  Elizabeth could advise Jane to use existing social conventions to let Bingley know that she reciprocates his affection, but she doesn’t, and Jane comes very close to losing him.  Mr. Bennet is more interested in laughing at the follies of humanity than entering into human entanglements, and his daughter shares some of these same tendencies.

Because Elizabeth enjoys “willfully misunderstanding” people (Darcy’s phrase), she almost misses out on the man most capable of making her happy.  To be sure, we must admit she has very good reasons for hating him.  He insults her on their first encounter, and he proves to be intolerably stuck up.  As she will learn later, however, he has good principles underneath these appearances, and she willfully fails to observe them.

Too often we get stuck in our first impressions (the original title for Pride and Prejudice) and fail to see what is truly before us.  We may even find confederates in our opinions. Elizabeth is drawn to Wickham, not only because he is handsome, but also because they share a mutual dislike of Darcy.  As a result, she fails to see into Wickham’s character, a misjudgment that almost has catastrophic consequences for the entire Bennet family.  Elizabeth’s pride in her discernment, amounting almost to smugness, is overthrown when Darcy’s letter shows many of her prejudices to be groundless.

Married to Darcy, she would learn to live effectively and forcefully in the world.  Because Darcy has experience with this world, Elizabeth realizes that he has a lot to teach her.  She comes to this realization when it appears that she has lost him:

She began now to comprehend that he was exactly the man who, in disposition and talents, would most suit her.  His understanding and temper, though unlike her own, would have answered all her wishes.  It was a union that must have been to the advantage of both: by her ease and liveliness, his mind might have been softened, his manners improved; and from his judgment, information, and knowledge of the world, she must have received benefit of greater importance.

As “Mistress of Pemberley,” Elizabeth will contribute to the very important bridging of classes that Austen saw as vital to England’s stability and well-being.  (Austen wanted middle class families like her own to merge with the upper classes, although she was content to have the lower classes remain where they were.)  Imagine Elizabeth wielding the power of a Lady Catherine, only doing so wisely and well.

One doesn’t necessarily need to marry into an estate to influence the world—Austen herself took a very unconventional path by writing novels—but entering Darcy’s mansion is a powerful symbol for stepping into one’s powers.  Elizabeth’s attraction to Pemberley is not what it is for Caroline Bingley, who sees it as a prop for her vanity.  Rather, for Elizabeth, the estate is a set of relationships and a social order that need her leadership.

For Darcy, the problem is the opposite one.  Think for a moment of the confining circle of people in which he moves.  It has little vitality and is in danger of becoming insular and cut off.  His aunt is dictatorial, his sister shy and confused, his cousin anemic and listless, his best friend wishy-washy.

In the larger historical picture, Darcy represents landed wealth, a way of life that was being eclipsed by urban growth and middle class trade.  The Gardiners, Elizabeth’s mercantile uncle and aunt, point to the future.  To be sure, land and blood continued to command immense prestige, and Darcy is proud of his connections.  But his pride pushes him to the edge of dance floors and into exclusive conversations.

In Elizabeth’s “fine eyes” Darcy sees the energy, the outgoingness, and the excitement that is missing from his world.  To put himself in touch with those energies, to marry into his Elizabeth side, he discovers himself willing to do almost anything, even if it means humiliating himself.

The books itself is a holistic blend of Elizabeth comedy and Darcy seriousness.  Although Pride and Prejudice may have important lessons to teach, it always assumes that we like a good laugh.  Austen takes as her motto Mr. Bennet’s words, “For what do we live, but to make sport for our neighbors, and laugh at them in our turn.”

True, we cannot just laugh and then retreat into our libraries.  Our deepest happiness and well-being are at stake, and the book, Darcy-like, makes clear what is right and what is wrong.   But it also reminds us that, when we work on our relationships, we should not take ourselves too seriously.