How Fantasy Keeps Us Human 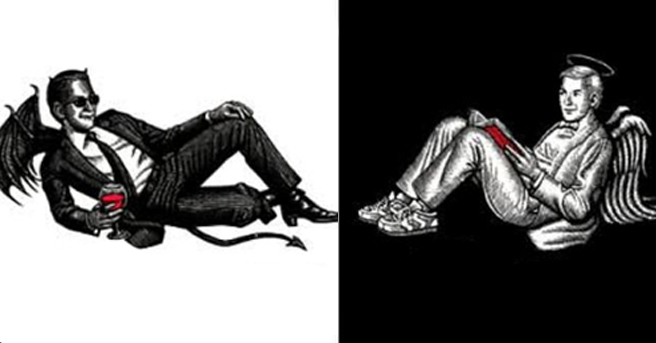 The bad and good angel in “Good Omens”

I understand better why Neil Gaiman and the late Terry Pratchett are so beloved after teaching them in my British fantasy course. The two have found their way into millennials’ hearts partly because they use fantasy and humor to critique ideological extremism.

They do this very effectively in the collaboratively written Good Omens, which my student Sara Hirshon wrote about. The novel is about an apocalypse that doesn’t quite come off. Two angels that have been around since the Garden of Eden—good angel Aziraphale and bad angel Crowley–are instructed to prepare for battle as their bosses have declared that the end times are nigh. The angel and the demon, however, have come to understand each other over the millennia—one might say that they have reached across the aisle—and are enjoying earth too much to desire its destruction.

Meanwhile, a mix-up at a local hospital means that the antichrist has accidentally been placed with a normal family and the other child given over to the demons that are supposed to train him.  Other subplots involves the four horsepersons of the apocalypse (War is a woman) and a time-serving clerk that falls in love with a witch. In the end, the antichrist figures that he prefers hanging out with his friends rather than ending life on earth as we know it. In passages quoted by Sara, the teenage antichrist declares that, because the world “is full of all sorts of brilliant stuff,” he “doesn’t want anyone messing it about or endin’ it before I’ve had a chance to find out about it.”

The combined forces of Az, Crowley, the clerk, the witch, the antichrist, and the other kids on the block defeat the four horsepersons and also the devil.

Pratchett and Gaiman show how extremism easily overwhelms us so that we lose our humanity. Because of their fascination with humans, Az and Crowley no longer represent two extreme ideologies but instead become two flawed human figures that fight for the populace…Pratchett and Gaiman are warning us against extremism and politicians who lose touch with the people that elected them.

Looking at the period in which the novel was written (1990), Sarah speculates that it reflects the bitter ideological battles between Labor and Thatcherism. She then expresses her longing that the Aziraphales and Crowleys in today’s America would find common cause. Democrats and Republicans, she notes, “often hate each other as soon as they are alerted to each other’s political stance”:

If an angel and a demon can sit down over lunch…despite having conflicting ideologies, then who says humans can’t. In fact, I know of a case where a Republican and Democrat took a road trip together and ended up…with a better understanding of each other…Perhaps the world is not as black and white as Heaven and Hell claim and perhaps we all can have conversations with people with opposing views. If we do, you may discover he’s not so bad, even if he is a demon and you’re an angel.

Pratchett explores similar themes in Thief of Time, which I taught in the fantasy course. There, the auditors of the universe—those who want things to function in a predictable matter—are upset that unpredictable humans are messing up their mechanistic order with imagination, free will, pleasure, and other traits that characterize us. (Think of the auditors as the agents in The Matrix, which may have influenced the novel.)  Among other things, humans play around with time, sometimes wasting it, sometimes making the most of it, sometimes slowing it down or speeding it up. The auditors therefore make arrangements to stop time, at which point human activity—which always interacts with time—will end. (The novel gets fairly philosophical on this point but Pratchett is both smart and witty about it.)

The four horsemen of the apocalypse show up again, along with a fifth horseman (Chaos). Rather than decimate people, however, they fight against the auditors. After all, they owe a lot to the human imagination, beginning with the human forms they have been endowed with:

To be human was to change, Death realized. The Horsemen…were horsemen. Men had wished upon them a certain shape, a certain form. And, just like the gods, and the Tooth Fairy, and the Hogfather [Santa Claus], their shape had changed them. They would never be human, but they had caught aspects of humanity as though they were some kind of disease.

As a result, Death has trouble getting the other horsemen to ride again. They’ve got other projects more interesting than wiping out humanity:

Because the point was that nothing, nothing had one aspect and one aspect alone. Men would envision a being called Famine, but once they gave him arms and legs and eyes, that meant he had to have a brain. That meant he’d think. And a brain can’t think about plagues of locusts all the time.

It’s worth noting that, when the novel was written, the world was relatively peaceful, what with the fall of the Berlin Wall and the independence movements in Eastern Europe. Today, Death might have an easier time recruiting Famine, War, and Pollution (replacing Pestilence, who has been sidelined by modern medication).

Pratchett’s point is that, while humans are undeniably flawed, they are a lot more interesting that the alternative. After all, how can you not love the species that invented boredom?

No other species anywhere in the world had invented boredom. Perhaps it was boredom, not intelligence, that had propelled them up the evolutionary ladder.

Pratchett dramatically emphasizes our wonderful complexity by having the auditors try to imitate humans and become hopelessly confused in the process. Above all, their circuits are blown by chocolate, which causes them to experience ecstasy when having feelings goes against their very nature. Chocolate, as a result, becomes a major weapon in the battle to save humanity.

Many Gaiman and Pratchett fans fall in love with them because their novels are in love with our comic, bumbling, often silly, often trivial, but invariably interesting selves. In the face of that, ideology, extremism, and unthinking conformity don’t stand a chance.