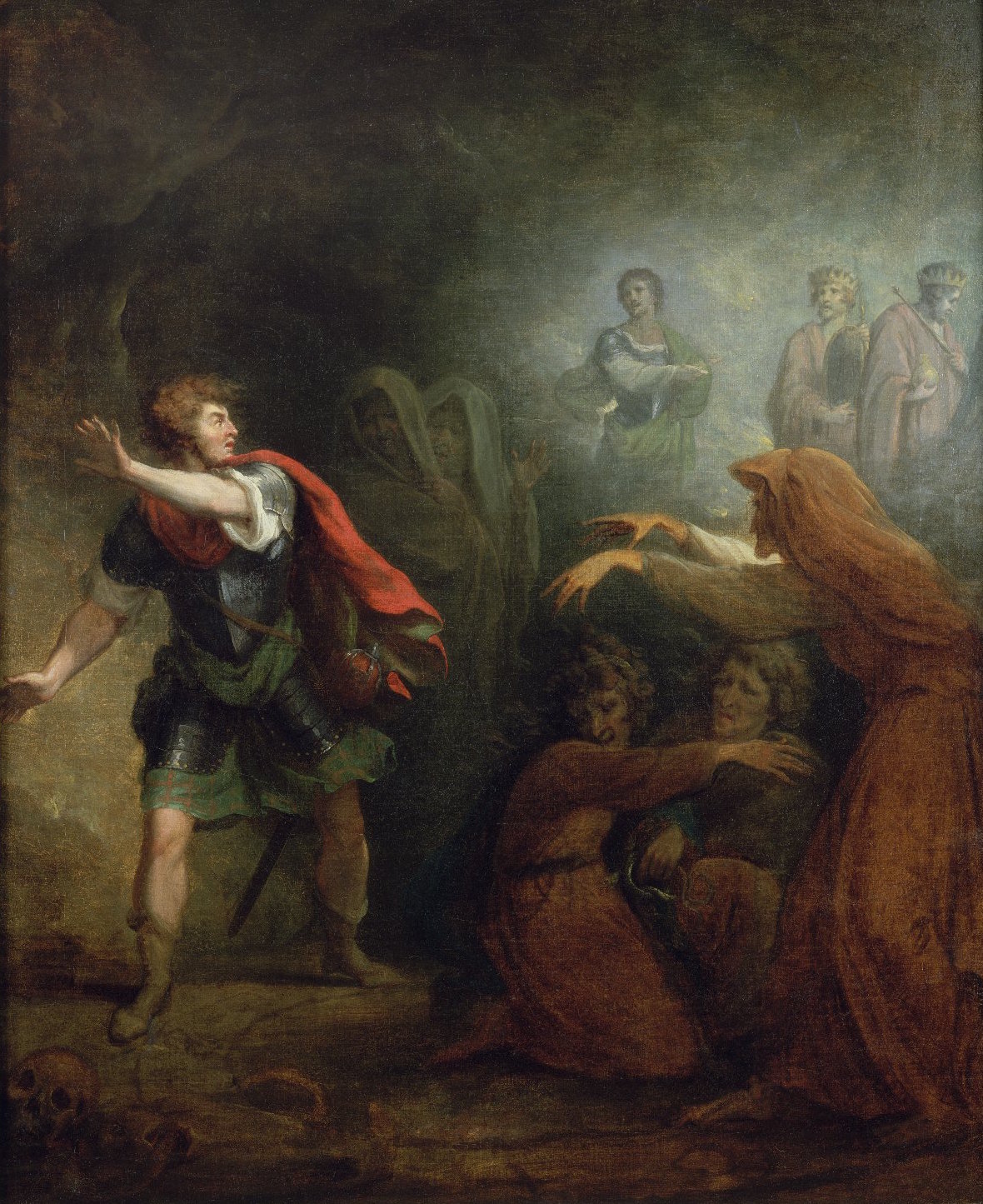 In my British Fantasy class, student Haley Bullis chose to write about the witches in Macbeth and at one point found herself comparing him to North Korean dictator Kim Jong-un.  I, meanwhile, had just read a Washington Post review (by Eliot A. Cohen) of Stephen Greenblatt’s Tyrant, a study of Shakespearean tyrants that finds parallels between Trump and Macbeth.

As Haley interprets them, the witches are a symbolic representation of Macbeth’s tyrant mind. Their escalating pronouncements track an ambitious man’s move to the dark side. First, they point the evolution from healthy to unhealthy ambition, from current position (thane of Glamis) to legitimate promotion (thane of Cawdor) to regicide:

As Haley sees it, the witches are the devil who whispers into the ear of cartoon characters (also Doctor Faustus).

Although the witches subsequently address Banquo, this too can be seen as reflecting Macbeth’s interior thoughts since tyrants are prone to paranoia, as evidenced by Macbeth later turning on his best friend. After all, if they themselves have broken God’s rules, then why wouldn’t everyone else, even people close to them. Think of how Kim Jong-un and Saddam Hussein went after family members.

Thus, the witches addressing Banquo can be seen, not as external causes of his paranoia, but as internal seeds that simply await the right conditions to blossom. Think then, of the witches’ words to Banquo as Macbeth’s thoughts:

First Witch: Lesser than Macbeth, and greater.
Second Witch: Not so happy, yet much happier.
Third Witch: Thou shalt get kings, though thou be none:
So all hail, Macbeth and Banquo!

But if the witches reflect the tyrant’s dark ambitions and his murderous paranoia, what are we to make of their false assurances later on in the play? After all, they tell Macbeth that “none of woman born shall harm Macbeth” and that

Macbeth shall never vanquish’d be until
Great Birnam wood to high Dunsinane hill
Shall come against him.

Haley had an answer for this too. Tyrants can be simulataneously paranoid and cocky. Therefore, while the witches represent Macbeth’s paranoia with their mentions of Banquo’s heirs and of Macduff (“Macbeth! Macbeth! Macbeth! beware Macduff;/Beware the thane of Fife”), with their other predictions they represent his belief he is invulnerable  As a result, we get a figure not unlike any number of dictators we could name.

And how about Trump? In certain ways, he shares this mixture of paranoia and cockiness. His desire to have the powers of a Kim Jong-un or a Vladimir Putin is his internal witch talking.

It’s probably a stretch, however, to think that his constant twitter mentions of witches—as in “WITCH HUNT!”—is him using Macbeth-type symbolism.

Whether or not Haley has Trump in mind, Washington Post reviewer Cohen thinks that Greenblatt does, although he feels that this is a flaw in the book:

[I]t is the truly great tyrants of Shakespeare’s work, Macbeth and Richard III, who are most in the spotlight. Here, [Greenblatt’s] analysis of the characters is masterly if slightly less sympathetic than they might otherwise be if he did not have the weight of the 45th president on his shoulders. Macbeth’s transition from more or less honorable and loyal servant of King Duncan to his murderer — and to the murderer of many others — is a tale of psychological development. So too is Richard III’s astounding soliloquy in “Henry VI, Part 3,” in which he describes himself as “like one lost in a thorny wood,/ That rents the thorns and is rent with the thorns,/ Seeking a way and straying from the way,/ Not knowing how to find the open air.” It is Shakespeare’s genius that in both cases we can see a complex if terrifying trajectory of a kind that would elude Trump, a considerably more static figure.

As Cohen sees it, Trump “is no Macbeth or Richard III” but

a triumphant (but teetotaling) Caliban with a Twitter account — full of all kinds of ambitions and fantastic conceits, who secretly craves the approval of the establishment he hates. Or, more likely Cloten, stepson of King Cymbeline, a brutal, spoiled, self-absorbed, misogynistic oaf who for his attempted trickery (which includes a wild murder-rape fantasy) comes to a very sticky end, indeed.

I like these other parallels but I’m not ready to drop the Macbeth altogether. Trump has at least talked of being willing to duplicate Macbeth’s assassination order of Macduff’s family, asking the CIA why it didn’t kill a terrorist’s family. True, I don’t find Trump to be as interesting as Macbeth, but that’s because he appears to lack Macbeth’s capacity for self-reflection and remorse. In other words, Trump may be more of a sociopath than Macbeth. It may only be our constitutional safeguards that prevent him from committing Macbeth type atrocities.

Rather than Greenblatt’s comparisons being undermined by his anxieties about Trump, it may be that having Trump as president makes the play all the more urgent.

Incidentally, Cohen is more appreciative of how Greenblatt handles those who enable tyrants, who do indeed have counterparts in the current GOP:

Greenblatt is powerful and more convincing, though, in his discussion of those who aid and support tyrants. He is particularly acute on the ways in which they deceive themselves about the end that awaits them, when, like so many Shakespearean characters, they become wise too late. Indeed, a chapter titled “Enablers” is the best in the book. This is a canny guide to contemporary Washington, for Shakespeare gives us all kinds of dupes, careerists, connivers and bullies who yield to the strange magnetism of power, no matter how unappealing he who wields it is. Here “Richard III” really does work as an instructive play on the dynamics of power…

And Cohen has one more on-target observation, which gets at the way that Trump (unlike Obama on occasions) doesn’t seem to be having fun being president:

[P]ower, once acquired, yields few satisfactions. As Greenblatt points out, the witty, even charming Richard of the first half of the play becomes increasingly dull, vicious and unimaginative toward the end. His head may be “impaled with a glorious crown,” but there is no real joy for him in it, and before long other parts of him will be impaled at Bosworth field.

We need every tool that literature can provide us for understanding our current political situation. Thank goodness we have Shakespeare in our toolkit.