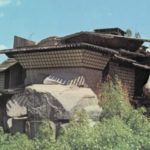 House on the Rock: A spiritual roadside attraction?

I devote today’s column to some thoughts on religion gleaned from Neil Gaiman’s fantasy masterpiece American Gods. While I don’t see Gaiman as a deep theological thinker, his conversation about America as a melting pot of religions is worth looking at.

In Gaiman’s novel, the gods that various immigrant groups brought with them to the new world find themselves endangered as belief in them fades. They drive taxis, work in slaughterhouses, walk the streets, and engage in other odd jobs to hold things together. The Norse god Odin, now a grifter, is trying to organize the old gods to fight against America’s new gods.

The new gods that America worships include the media, the automobile, the internet, and credit cards. Here’s Odin, a.k.a. Mr. Wednesday, addressing an assemblage of the gods:

Now, as all of you will have had reason aplenty to discover for yourselves, there are new gods growing in America, clinging to growing knots of belief: gods of credit card and freeway, of Internet and telephone, of radio and hospital and television, gods of plastic and of beeper and of neon. Proud gods, fat and foolish creatures puffed up with their own newness and importance.

One of these new gods is a “fat kid” who represents computers. He has kidnapped the protagonist Shadow, who is working for Odin, and tells him to pass along this message:

You tell Wednesday this, man. You tell him he’s history. He’s forgotten. He’s old. Tell him that we are the future and we don’t give a fuck about him or anyone like him. He has been consigned to the dumpster of history while people like me ride our limos down the superhighway of tomorrow.

Tell him that we have fucking reprogrammed reality. Tell him that language is a virus and that religion is an operating system and that prayers are just so much fucking spam….You should know that if we do fucking kill you, then we’ll just delete you. You get that? One click and you’re overwritten with random ones and zeros. Undelete is not an option.

Gaiman periodically has characters observe that America “is a bad land for gods,” and this assertion seems to be borne out by the demise of various old religions featured by Gaiman. He strategically avoids talking about those religions that are doing just fine in America, however, especially Christianity but also Judaism, Islam, and others. Their gods are certainly not in the same boat as the Norse, Egyptian, African animist, and Celtic gods.

Supposedly Gaiman considered including Jesus in his book—there’s one passing reference—and then chose not to, and one can see why: he would have had to grapple with the high number of self-professed Christians. The real reason, however, may be that he is more drawn to earth gods than to sky gods, such as West African trickster god Anansi, leprechauns, the Egyptian gods of the dead, German Kobolds, and the Anglo-Saxon fertility goddess Eostre (who was appropriated by Christians to become Easter). Their passing points to the way that we are losing touch with the earth. In some ways, Gaiman’s book is less a commentary on America than on modernity.

No systematic religious historian, Gaiman focuses on colorful stories and characters from mythology. (The difference between mythology and religion is whether one believes it or not.) What he gets right is that religion, like fiction, is a symbol system grappling with life’s biggest questions. God is too large to ever understand so we tell stories and engage in rituals as a gesture towards the ineffable. Here’s Gaiman on this process:

None of this [the plot of American Gods] can actually be happening. If it makes you more comfortable, you could simply think of it as metaphor. Religions are, by definition, metaphors, after all: God is a dream, a hope, a woman, an ironist, a father, a city, a house of many rooms, a watchmaker who left his prize chronometer in the desert, someone who loves you—even, perhaps, against all evidence, a celestial being whose only interest is to make sure your football team, army, business, or marriage thrives, prospers, and triumphs against all opposition.

Religions are places to stand and look and act, vantage points from which to view the world.

Gaiman’s insight stems in part from his multiple stories of immigrants and slaves and how they relied on their gods to cope with daunting conditions.

Gaiman believes that today we are drawn to religion for the same reason we are drawn to fantasy: we long for the numinous in a world that appears to be shutting down our spiritual outlets. This leads to an interesting theory about the significance of roadside attractions, such as Wisconsin’s House on the Rock, Mt. Rushmore, Florida’s Weeki Watchee State Park (with its mermaid shows), and Tennessee’s Rock City. Here’s Wednesday on House on the Rock:

“This is a roadside attraction,” said Wednesday. “One of the finest. Which means it is a place of power.”

“It’s perfectly simple,” said Wednesday. “In other countries, over the years, people recognized the places of power. Sometimes it would be a natural formation, sometimes it would just be a place that was, somehow, special. They knew that something important was happening there, that there was some focusing point, some channel, some window to the Immanent. And so they would build temples or cathedrals, or erect stone circles, or…well, you get the idea.”

“[I]n the USA, people still get the call, or some of them, and they feel themselves being called to from the transcendent void, and they respond to it by building a model out of beer bottles of somewhere they’ve never visited, or by erecting a gigantic bat house in some part of the country that bats have traditionally declined to visit. Roadside attractions: people feel themselves being pulled to places where, in other parts of the world, they would recognize that part of themselves that is truly transcendent, and buy a hot dog and walk around, feeling satisfied on a level they cannot truly describe, and profoundly dissatisfied on a level beneath that.”

This true spirituality, in Gaiman’s eyes, contrasts with that found in churches (and perhaps temples and mosques), which Odin dismisses as no better than “dentist offices.”

I suspect that Gaiman views Christianity as Howard Nemerov sees it in “Boom!,” where the poet attacks prosperity theology as having sold out to the almighty dollar. “Better a roadside attraction than a shopping mall” is how Shadow puts it at one point.

For Gaiman, salvation ultimately lies with America’s oldest gods, those of the Native Americans, who function as a stand-in for the land itself. Shadow, undergoing a Norse vigil in which he is hung from a tree for nine days and which resembles a crucifixion, has a vision of the Native American trickster god Wisakedjak, a.k.a. Whiskey Jack:

“Look” said Whiskey Jack. “This is not a good country for gods. My people figured that out early on. There are creator spirits who found the earth or made it or shit it out, but you think about it: who’s going to worship Coyote? He made love to Porcupine Woman and got his dick shot through with more needles than a pincushion. He’d argue with rocks and the rocks would win.

“So yeah, my people figure that maybe there’s something at the back of it all, a creator, a great spirit, and so we say thank you to it, because it’s always good to say thank you. But we never built churches. We didn’t need to. The land was the church. The land was the religion. The land was older and wiser than the people who walked on it. It gave us salmon and corn and buffalo and passenger pigeons. It gave us wild rice and walleye. It gave us melon and squash and turkey. And we were the children of the land, just like the porcupine and the skunk and the blue jay.”

“There are a lot of good places,” said Whiskey Jack. “That’s kind of the point. Listen, gods die when they are forgotten. People too. But the land’s still here. The good places, and the bad. The land isn’t going anywhere. And neither am I.”

As an immigrant from England, Gaiman has an outsider’s eye, which is useful in that it gives us new perspectives on ourselves. He has traveled around America and thrown many of our oddities into his novel. And he’s not entirely wrong about how American capitalism and consumerism threaten modern religion (see my post on how American Christianity became a money cult).

He doesn’t do justice to how various American Christians have developed earth-centered spiritual practices, however (think Emily Dickson, for instance, or Mary Oliver). Americans in spiritual search do not limit themselves to roadside attractions.

In other words, Gaiman has some of the reductiveness of the satirist. That being said, however, American Gods is an invigorating read and a great spur to the kind of “big question” explorations that college students love to engage in.