Neil Gaiman and the Pipeline Protests 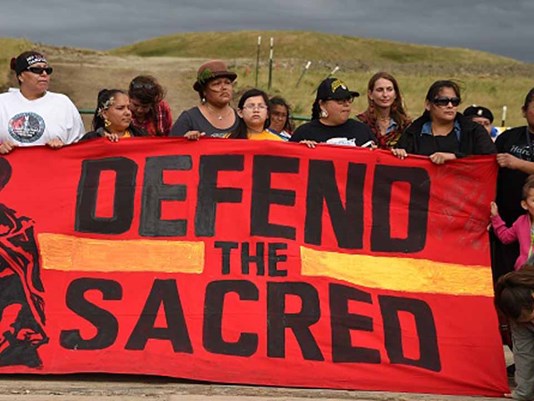 A student in my American Fantasy class, Lindsay Wooleyhand, has written an essay showing that Neil Gaiman’s American Gods has important things to say about Donald Trump’s oil agenda and the Native American protests against the Dakota Access Pipeline. Lindsay didn’t apply the novel directly to contemporary politics, but she makes clear how it is relevant to contemporary American life.

American Gods, soon to be a Starz television mini-series, is about an existential search for meaning in a spiritually decimated America. On his quest Shadow encounters old gods that various immigrant groups have brought with them to the new world and then abandoned. I’ve written how Gaiman captures our longing for spiritual connection in an earlier post, so I’ll focus here on how protests like those of the Standing Rock Indians are an attempt to save America’s soul. Lindsay says that, before America is anything, it is the land. Once we lose sight of that, we are lost.

Lindsay relates to Gaiman because, like him, she was raised in England before coming to America as a teenager. In her move from rural England to Baltimore, she felt that a special connection with nature was cut. She was struck by how Americans drive everywhere.

Shadow prefers the old gods (Odin, Anansi, Teutonic and Celtic fertility gods) to the new ones (the gods of the internet, of television, of credit cards) because they invoke a time when people were closer to the land. They cannot show him the way to a viable future, however. Their followers tried to graft their religions upon America but the graft never took. As Shadow’s spirit guide Buffalo Man tells him, the gods from other lands

never understood that they were here–and the people who worshipped them were here–because it suits us that they are here.

Another Native American spirit guide explains to Shadow how reverence for the land trumps all other religions. (I quoted this passage in my earlier post.) The speaker this time is the Native American trickster god Wisakedjak, a.k.a. Whiskey Jack:

“Look” said Whiskey Jack. “This is not a good country for gods. My people figured that out early on. There are creator spirits who found the earth or made it or shit it out, but you think about it: who’s going to worship Coyote? He made love to Porcupine Woman and got his dick shot through with more needles than a pincushion. He’d argue with rocks and the rocks would win.

“So yeah, my people figure that maybe there’s something at the back of it all, a creator, a great spirit, and so we say thank you to it, because it’s always good to say thank you. But we never built churches. We didn’t need to. The land was the church. The land was the religion. The land was older and wiser than the people who walked on it. It gave us salmon and corn and buffalo and passenger pigeons. It gave us wild rice and walleye. It gave us melon and squash and turkey. And we were the children of the land, just like the porcupine and the skunk and the blue jay.”

“There are a lot of good places,” said Whiskey Jack. “That’s kind of the point. Listen, gods die when they are forgotten. People too. But the land’s still here. The good places, and the bad. The land isn’t going anywhere. And neither am I.”

I turn at this point to Lindsay’s essay:

Shadow, in order to feel alive, has to empty himself of modernity so that he can touch base with the foundational values of the land. One of the first steps of Shadow cleansing himself of modernity is when he is essentially reborn by the land into a new spiritual awareness.

Shadow offers himself to the land, in his dream, and is pushed from the Buffalo Man’s underground cave up through the earth: “The pain, on that last awful contraction, was impossible to believe, as he felt himself being squeezed, crushed, and pushed through an unyielding rock gap.” Shadow’s offering of himself to the earth allows for him to continue the journey of connecting to the land, which ultimately supersedes the gods and even humanity.

Lindsay’s conclusion comes out of her own sense that, when she came to America, she connected with something deeper than drive-through restaurants and omnipresent asphalt:

Gaiman’s metaphor of the land being a living force emphasizes its importance and its spiritual quality. Because humanity has begun to disrespect and distance itself from the land by turning towards modernity, the land, according to American Gods, can choose to abandon humanity. The land gives power and guidance to Shadow, showing him that he does not have to believe in the gods to feel alive…

Ultimately, through examining of Shadow’s spiritual journey in American Gods, the answer to how America can cope with modernity is through combining the material and spiritual aspects of life together and focusing on the land. The land, because it is more substantial and can give humanity much more than any of the gods, will always sustain people as long as people respect it and everything that it does for them. Modernity does not have to be something to fear. Once people lose touch with the earth, however, they lose touch with the most basic and essential characteristics of life itself.

Now apply this understanding to a news item that showed up recently in Reuters:

Native American reservations cover just 2 percent of the United States, but they may contain about a fifth of the nation’s oil and gas, along with vast coal reserves.

Now, a group of advisors to President-elect Donald Trump on Native American issues wants to free those resources from what they call a suffocating federal bureaucracy that holds title to 56 million acres of tribal lands, two chairmen of the coalition told Reuters in exclusive interviews.

The group proposes to put those lands into private ownership – a politically explosive idea that could upend more than century of policy designed to preserve Indian tribes on U.S.-owned reservations, which are governed by tribal leaders as sovereign nations.

The tribes have rights to use the land, but they do not own it. They can drill it and reap the profits, but only under regulations that are far more burdensome than those applied to private property.

Here’s what one Native American had to say about the plan:

“Our spiritual leaders are opposed to the privatization of our lands, which means the commoditization of the nature, water, air we hold sacred,” said Tom Goldtooth, a member of both the Navajo and the Dakota tribes who runs the Indigenous Environmental Network. “Privatization has been the goal since colonization – to strip Native Nations of their sovereignty.”

In American Gods, there is to be a final Gotterdammerung, or war of the gods, between the old and the new. This war will wipe away the old gods and, with them, what few checks there are to modernity—which is to say, what few remembrances there are of interacting with the earth. Then the forces of chaos, blood and exploitation will reign.

Fortunately, a newly enlightened Shadow is able to stop the war. He shows the contending factions that there doesn’t have to be war—that, as Lindsay puts it, the land “will always sustain people as long as people respect it and everything that it does for them.”

Woe be to us if we don’t listen to Nature, which has a way of showing us who’s in charge. It’s useful to remember that, when we say that climate change is endangering the planet, what we really mean is that it is endangering out continued existence on the planet. The planet itself will do just fine.

Or as Buffalo man concludes the passage I quoted earlier, the imported gods

never understood that they were here–and the people who worshipped them were here– because it suits us that they are here. But we can change our minds. And perhaps we will.