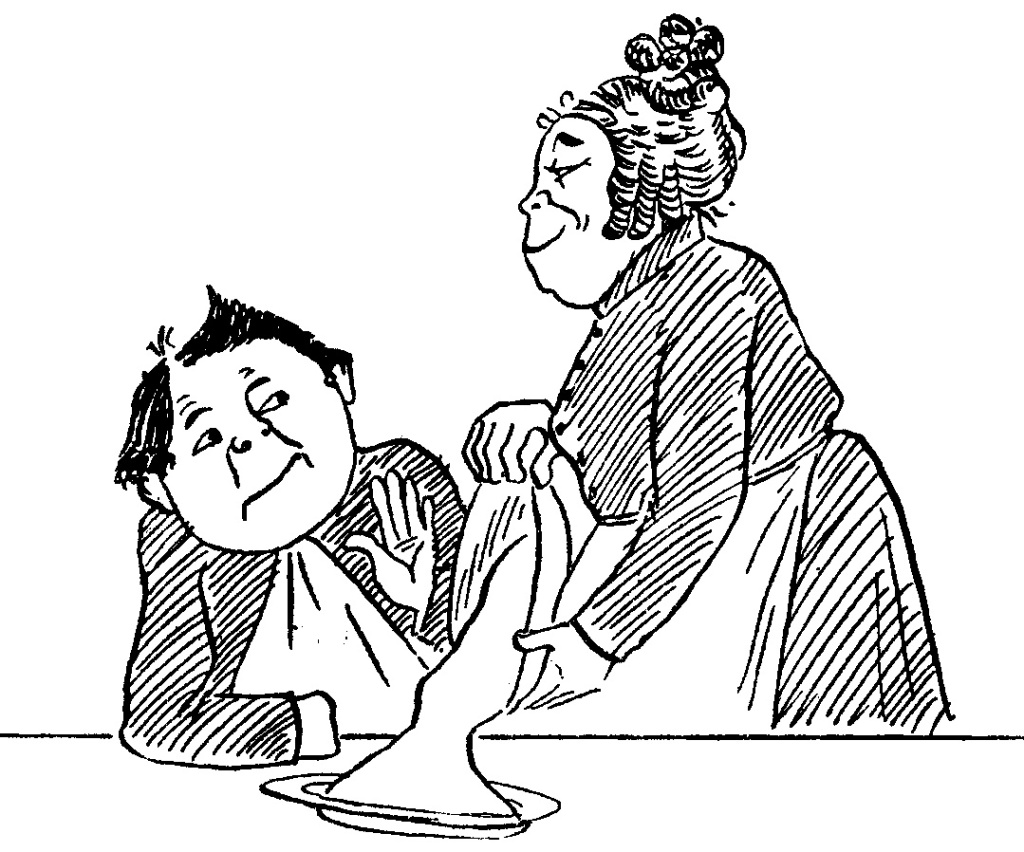 Learn from the Pig to take whatever Fate/Or Elder Persons heap upon your plate.

As a child I loved the cantankerous Hilaire Belloc’s Cautionary Tales for Children and New Cautionary Tales, which describe the gruesome things that can happen to children if they run away from nursemaids, tell lies, ignore their reading lessons, and the like. (They will be be devoured by a lion, burned alive, and gored by a bull respectively.) A poem about strange culinary tastes around the world, equally delightful if not about children, has a section on what Belloc sees as America’s weird obsession with pie. Since pumpkin pie holds an almost equal footing with turkey in Thanksgiving feasts, here is “On Food.” The pie references occur midway through.

The final line of the poem is a reference to the Latin phrase De gustibus non est disputandum, which means that there can be no dispute in matters of taste.

Alas! What various tastes in food,
Divide the human brotherhood!
Birds in their little nests agree
With Chinamen,
but
not with me.

Colonials like their oysters hot,
Their omelettes heavy— I do not.

The French are fond of slugs
and frogs,
The Siamese eat
puppy-dogs.
The nobles at the brilliant Court
Of Muscovy, consumed a sort
Of candles held and eaten
thus
As though they were asparagus.

The Spaniard, I have heard it said,
Eats garlic, by itself, on bread:
Now just suppose a friend or dun
Dropped in to lunch at half-past one
And you were jovially to say,
“Here’s bread and garlic! Peg away! ”
I doubt if you would gain your end
Or soothe the dun, or please the friend.

In Italy the traveler notes
With great disgust the flesh of goats
Appearing on the table d’hotes;
And even this the natives spoil
By frying it in rancid oil.

In Maryland they charge like sin
For nasty stuff called terrapin;
And when they ask you out to dine
At Washington, instead of wine,
They give you water from the spring
With lumps of ice for flavoring,
That sometimes kill and always freeze
The high plenipotentiaries.

In Massachusetts all the way
From Boston down to Buzzards Bay
They feed you till you want to die
On rhubarb pie and pumpkin pie,
And horrible huckleberry pie,
And when you summon strength to cry,
“What is there else that I can try ?”
They stare at you in mild surprise
And serve you other kinds of pies.
And I with these mine eyes have seen
A dreadful stuff called Margarine
Consumed by men in Bethnal Green.

But I myself that here complain
Confess restriction quite in vain.
I feel my native courage fail
To see a Gascon eat a snail;
I dare not ask abroad for tea;
No cannibal can dine with me;
And all the world is torn and rent
By varying views on nutriment.

And yet upon the other hand,
De gustibus non disputand—

Although I live in Maryland, I have never dined upon terrapin. I plead guilty, however, to iced water, pies, and margarine. We also fill our turkeys with oyster stuffing, and then (to the horror of my Slovene friends, who never mix meat with fruit) we add cranberry sauce.

On the other hand, I myself have never gotten used to the American practice of putting marshmallows on sweet potatoes. Yech!