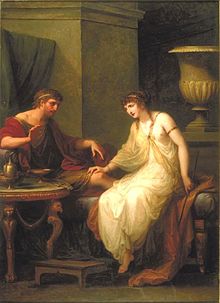 The contrast between an accommodating Christine Blasey Ford and an exploding Brett Kavanaugh is indelibly printed on my mind and may be the major thing I take away from the hearings. That white privileged men can use anger to assert dominance while women and people of color must speak in measured tones has become abundantly clear from the whole debacle. If people didn’t see it before, they see it now.

I’ve recently been revisiting classic epics and noting the sense of male entitlement that pervades them. Odysseus and Aeneas carry around Zeus’s/Jupiter’s endorsement, which allows them to exploit and then abandon a string of women. Because the authors provide well-rounded portraits of the human condition, however, we also get images of women pushing back (Scylla and Charybdis, Clytemnestra [mentioned by Agamemnon in Hades], Juno, Amata, Corinna). Men can’t rest entirely easy in their privilege.

Margaret Atwood too pushes back as she rethinks these epics, seeing Odysseus through Circe’s eyes in her 23 “Circe/Mud” poems. I thought of Dr. Ford as I read through them.

In Atwood’s retelling, Circe strives to be accommodating while Odysseus just takes, takes, takes. As Atwood sees it, this is partially Circe’s fault for being too passive. She needs to read Rebecca Traister’s just released book, Good and Mad: The Revolutionary Power of Women’s Anger.

Look, for instance, how she offers Odysseus the things on her island. Rather than be grateful, he just appropriates them as his due. Awed by and almost admiring of his self-assurance, Circe tells him, “You know how to take”:

There are so many things I want
you to have. This is mine, this
tree, I give you its name,

here is food, white like roots, red,
growing in the marsh, on the shore,
I pronounce these names for you also.

This is mine, this island, you can have
the rocks, the plants
that spread themselves flat over
the thin soil, I renounce them.

You can have this water,
this flesh, I abdicate,

I watch you, you claim
without noticing it,
you know how to take.

Just because he takes so effortlessly, however, does not absolve him of responsibility. As she says in another poem:

The trees bend in the wind, you eat, you rest,
you think of nothing. Your mind, you say,
is like your hands, vacant:

vacant is not innocent.

Even worse than the taking, she says, are the lies that men like Odysseus tell themselves:

Those who say they want nothing
want everything.
It was not this greed
that offended me, it was the lies.

Among those things Odysseus takes is Circe herself. He claims to be making love and that’s what she tells herself that it is. After all, if it’s not love, then it’s hatred, which is a painful thing to admit:

Holding my arms down
holding my head down by the hair

mouth gouging my face
and neck, fingers groping into my flesh

(Let go, this is extortion,
you force my body to confess
too fast and
incompletely, its words
tongueless and broken)

If I stopped believing you
this would be hate

Actually, it’s more complicated than hate. I think that Odysseus (and Brett Kavanaugh) define their manhood by, among other things, their ability to control women. That’s what high school Kavanaugh and college Kavanaugh were experimenting with. When women push back, they fall apart (as we saw in the hysteria of Kavanaugh and senators Lindsey Graham, Chuck Grassley, and Orrin Hatch). Circe describes them:

[T]hey swoop and thunder
around this island, common as flies,
sparks flashing, bumping into each other,

on hot days you can watch them
as they melt, come apart,
fall into the ocean
like sick gulls, dethronements, plane crashes.

In contrast to these macho men, Circe describes the men she prefers. I, who felt entirely out of place amongst the Kavanaughs who attended my own prep school, see myself in her depiction:

I search instead for the others,
the ones left over,
the ones who have escaped from these
mythologies with barely their lives;
they have real faces and hands, they think of themselves as
wrong somehow, they would rather be trees.

Those politicians who insist on dominance, by contrast, are trapped in the mythologies. They may see themselves as masters of their destiny and captains of their soul, but as Atwood describes them, they are in the grip of forces beyond them. Because their boot is on the prow, they don’t realize that they are being shoved:

There must be more for you to do
than permit yourself to be shoved
by the wind from coast
to coast to coast, boot on the boat prow
to hold the wooden body
under, soul in control

Circe the enchantress suggests to them that there’s more to life than winning:

Ask at my temples
where the moon snakes, tongues of the dark
speak like bones unlocking, leaves falling
of a future you won’t believe in

Ask who keeps the wind
Ask what is sacred

She then points out the emptiness of their lives:

Don’t you get tired of killing
those whose deaths have been predicted
and are therefore dead already?

Don’t you get tired
of wanting to live forever?

Don’t you get tired of saying Onward?

The fact that their lives are empty is scant consolation for those whose islands they are stealing, however. Atwood wants women to get angry and to fight back against the mythologies. In the process, they will save sacred things that are being desecrated.