Beholding the Summer Dead before Me 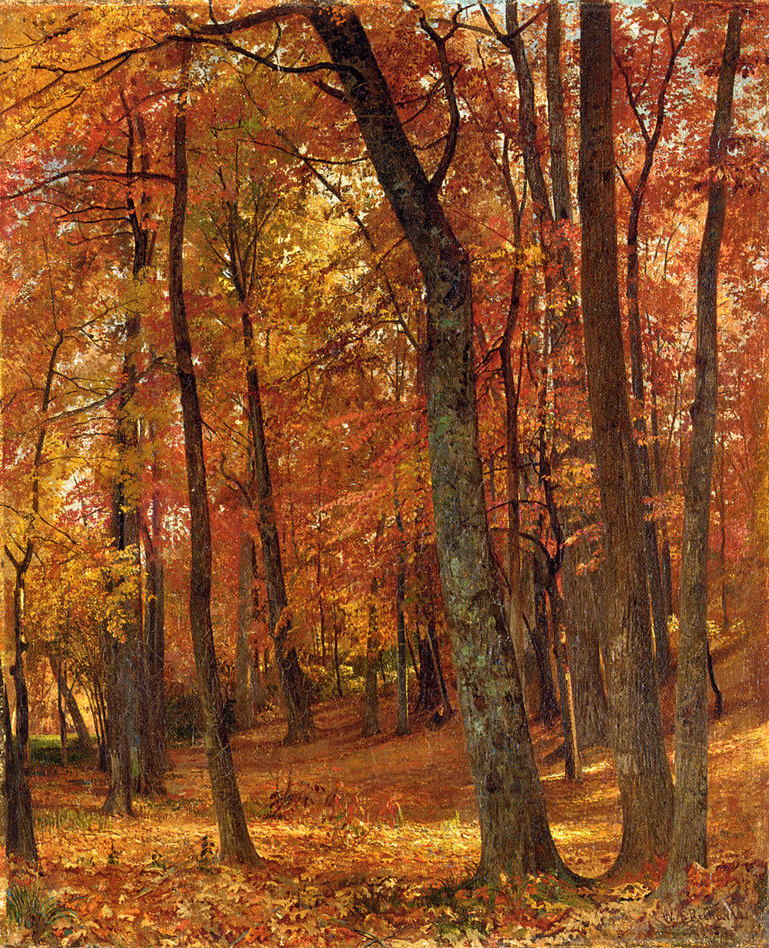 Because it is autumn and the wind is stripping the trees of their leaves, here’s a haunting Charles Swinburne poem that features the season. The title is about the verse form that Swinburne uses, a poem using lines of eleven syllables. The most famous hendecasyllabic line is Keats’ “A thing of beauty is a joy forever.”

In the month of the long decline of roses
I, beholding the summer dead before me,
Set my face to the sea and journeyed silent,
Gazing eagerly where above the sea-mark
Flame as fierce as the fervid eyes of lions
Half divided the eyelids of the sunset;
Till I heard as it were a noise of waters
Moving tremulous under feet of angels
Multitudinous, out of all the heavens;
Knew the fluttering wind, the fluttered foliage,
Shaken fitfully, full of sound and shadow;
And saw, trodden upon by noiseless angels,
Long mysterious reaches fed with moonlight,
Sweet sad straits in a soft subsiding channel,
Blown about by the lips of winds I knew not,
Winds not born in the north nor any quarter,
Winds not warm with the south nor any sunshine;
Heard between them a voice of exultation,
“Lo, the summer is dead, the sun is faded,
Even like as a leaf the year is withered,
All the fruits of the day from all her branches
Gathered, neither is any left to gather.
All the flowers are dead, the tender blossoms,
All are taken away; the season wasted,
Like an ember among the fallen ashes.
Now with light of the winter days, with moonlight,
Light of snow, and the bitter light of hoarfrost,
We bring flowers that fade not after autumn,
Pale white chaplets and crowns of latter seasons,
Fair false leaves (but the summer leaves were falser),
Woven under the eyes of stars and planets
When low light was upon the windy reaches
Where the flower of foam was blown, a lily
Dropt among the sonorous fruitless furrows
And green fields of the sea that make no pasture:
Since the winter begins, the weeping winter,
All whose flowers are tears, and round his temples
Iron blossom of frost is bound for ever.”

Another famous autumn poem, Shakespeare’s Sonnet 73, provides Swinburne with many of his images. I have in mind the leaves that “shake against the cold” (in Swinburne, “the fluttered foliage,/Shaken fitfully”), the “sunset that fadeth in the west” (in Swinburne, “above the sea-mark/Flame as fierce as the fervid eyes of lions/Half divided the eyelids of the sunset”), and “the ashes of his youth” (in Swinburne, “the season wasted,/Like an ember among the fallen ashes”).

In Shakespeare’s grim analogy, the yellow leaves of the fall are like teeth lost by an aging man while the shaking of the boughs is like aged palsy. He is like a ruined structure where “late the sweet birds sang.”

The speaker imagines that the young man will treasure him in his aging because he knows he will soon lose him. I’m not sure how confident he is that this will be the case.

That time of year thou may’st in me behold
When yellow leaves, or none, or few, do hang
Upon those boughs which shake against the cold,
Bare ruin’d choirs, where late the sweet birds sang.
In me thou see’st the twilight of such day,
As after sunset fadeth in the west,
Which by-and-by black night doth take away,
Death’s second self, that seals up all in rest.
In me thou see’st the glowing of such fire
That on the ashes of his youth doth lie,
As the death-bed whereon it must expire
Consum’d with that which it was nourish’d by.
This thou perceivest, which makes thy love more strong,
To love that well which thou must leave ere long.

Yes, autumn can be a melancholy season. But that is part of what makes it so beautiful.