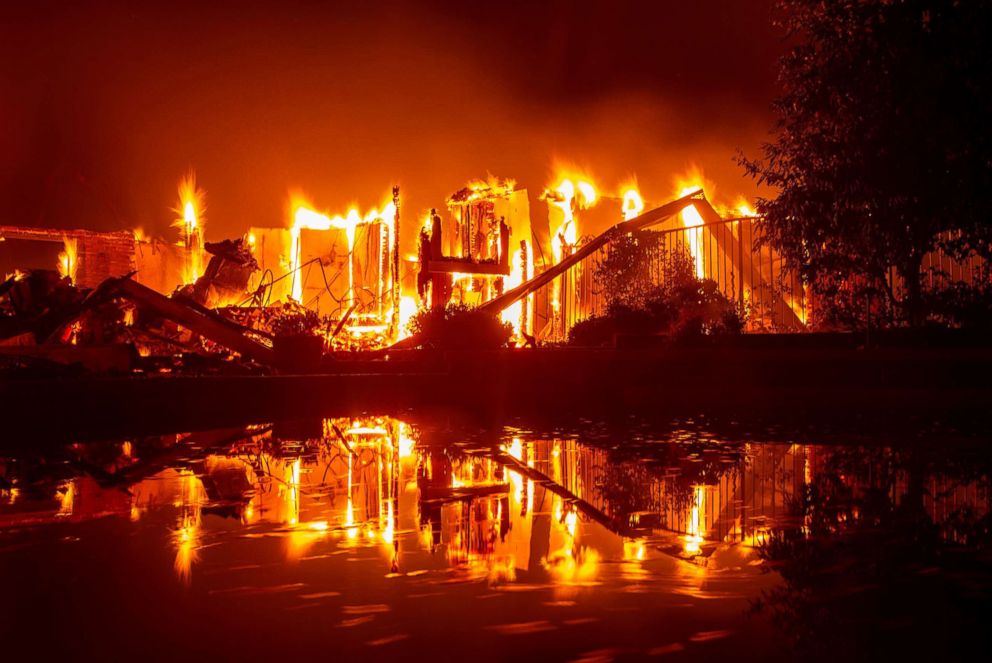 The Carr Fire burns a home in Redding, California

Just as warming waters are causing bigger and more frequent hurricanes, so climate change is contributing to the intensity of California’s wildfires. The fires this year so far have burned 98,000 acres and killed six people, who can be added to the 44 who died last year.  An essay I wrote last October remains all too relevant.

According to The Guardian, the conflagrations over the past two years have spawned

pyrotechnics, from firenados to towering pyrocumulus clouds that evoke a nuclear detonation. These events are not aberrations, say experts. They are California’s future.

The article explains the role of climate change in the fires:

As the climate shifts, so does fire behavior. Summers are longer and drier. Sometimes the winter rains are meager for years, as in the recent five-year drought. Sometimes, like this year, they are torrential, producing explosive plant growth that, several months later, desiccates into prime accelerant. The needle is moving, but where it will stop is anybody’s guess.

“Climate change is continuing to unfold,” said Anthony LeRoy Westerling, a professor of management of complex systems at the University of California, Merced. “The impacts from it will probably accelerate. There won’t be a new normal in our lifetimes.”

With that happy prediction, here’s last year’s essay on Louis MacNeice’s “Brother Fire,” which helps explain why not everyone is equally horrified.

The poem I chose today to honor the victims of the California wildfires also provides insight into a perverse reason why some Americans are refusing to do anything about climate change. Some people take a certain delight in seeing everything burn down—at least if it is someone else’s house.

I know that this sounds like a strange explanation for climate denial, but there’s a lot of strangeness going on in American politics these days. Take, for instance, the fact that EPA head Scott Pruitt is aggressively rolling back Obama’s measures regulating carbon emissions at just the moment when we have been hit by both wildfires, exacerbated by an unusually hot summer, and a string of catastrophic hurricanes, exacerbated by warming Gulf waters. Pruitt has said that immediately following a hurricane is no time to talk about climate change, but apparently it is the right time to undo efforts to combat it.

But okay, maybe Pruitt is just a garden variety political hypocrite who is carrying water (or rather, coal and oil) for the fossil fuel industry. More disturbing are those who seem to delight in destruction. I’m thinking especially of those who revel in the chaos that Donald Trump is causing, or at least in how he is upsetting “establishment elites.” Among these, of course, is white nationalist Steve Bannon, who purportedly once described himself as a Lenin admirer:

[W]e had a long talk about his approach to politics. He never called himself a “populist” or an “American nationalist,” as so many think of him today. “I’m a Leninist,” Bannon proudly proclaimed.

Shocked, I asked him what he meant.

“Lenin,” he answered, “wanted to destroy the state, and that’s my goal too. I want to bring everything crashing down, and destroy all of today’s establishment.” Bannon was employing Lenin’s strategy for Tea Party populist goals. He included in that group the Republican and Democratic Parties, as well as the traditional conservative press.

You get some of this from leftists like Susan Sarandon as well, as reported in CNN during last year’s election:

“Some people feel that Donald Trump will bring the revolution immediately, if he gets in. Then things will really, you know, explode,” Sarandon said, referring to the political “revolution” [Bernie] Sanders preaches about on the trail.

See if you can’t see some of this destructive impulse in Louis MacNeice’s “Brother Fire.” He is describing the London blitzkrieg, and although he is horrified (as one would expect), he also discovers within himself a certain delight:

When our brother fire was having his dog’s day
Jumping the London streets with millions of tin cans
Clanking at this tail, we heard some shadow say,
“Give the dog a bone”–and so we gave him ours;
Night after night we watched him slaver and crunch away
The beams of human life, the tops of topless towers.

Which gluttony of his for us was Lenten fare
Who Mother-naked, suckled with sparks, were chill
Though dandled on a grill of sizzling air
Striped like a convict–black, yellow and red;
Thus were we weaned to knowledge of the Will
That wills the natural world but wills us dead.

O delicate walker, babbler, dialectician Fire,
O enemy and image of ourselves,
Did we not on those mornings after the All Clear,
When you were looting shops in elemental joy
And singing as you swarmed up city blocks and spire,
Echo your thought in ours? Destroy! Destroy!

In the first two stanzas, the speaker, like someone on a Lenten diet, watches horrified as the gluttonous fire devours London. This must what it must be like for California homeowners as they watch a “natural world [that] wills us dead.”

And yet, even in MacNeice’s horror, there is envy. To be “suckled with sparks” sounds enticing. “O enemy and image of ourselves,” the poet asks, “did we not…echo your thought in ours?” In other words, did not a part of us find ourselves rooting for you?

Is it a sign of decadence that we live in a country where many get a kick out of someone who comes in and kicks the hell out of long established norms and protocols, who every day has us wondering what outrageous thing he will say or do next? Looking back in time for a precedent, maybe that’s why Edwardian England, stable and prosperous, embarked upon World War I. Maybe powerful countries get bored and start upsetting apple carts just for the hell of it.

I myself am not such a person, which is why I sometimes consider myself a conservative in the old-fashioned sense. I was fine with “no drama Obama,” and I was looking forward to a dull but extremely competent Hillary Clinton in the White House. Many, however, appear to be opting instead for a made-for-television spectacle.

They are certainly getting one. Unless we take serious measures to counter climate change, the wildfires and hurricanes will be only the first year of a long running series. Perhaps we should call it, “Destroy! Destroy!”