Inviting Jane into Your Life 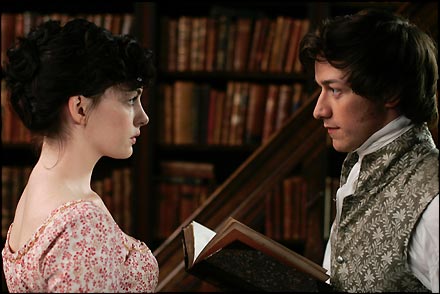 It’s time to write about my first year seminar students’ semester-end responses to Jane Austen. As always, they are very rich. As I’ve noted many times, each generation must reinterpret the classics for themselves because, as times change, so do our interpretations. The class stepped up to the challenge.

I report here on their presentations as well as their essays. They were to share their ideas in such a way as to engage the interest of their auditors. In my opinion, this happens far too infrequently at scholarly conferences.

Abeni Schoen was amazed at how well Northanger Abbey conveys the challenges of being in a new environment without any friends. She talked about how easy it is, when feeling lonely, to fall in with the wrong kind of people (Isabel and John Thorpe) and how one needs the right kinds of friends (such as the Tilneys) to survive. Her own Tilney-like friends, she said, regularly call her out when she strays from studying.

I was struck, in Abeni’s presentation, at her sense of wonder that Jane Austen understood her so well. She had thought her to be a dusty museum relic. Abeni now has a clear model for how she can become a guide for new students in the years to come.

Abby was fascinated by Marianne’s romantic sensibilities, which she identified with. At first she saw both Elinor and Austen as critical of Romanticism but ultimately concluded that both have more nuanced views than she realized. Elinor sees perfectly well how suffocating and hypocritical are the guardians of social order, like Lady Middleton and Fanny Dashwood. Deeply in love with her sister, she is not anti-romantic. She just worries that, by exposing herself as she does, Marianne makes herself too vulnerable. Elinor understands and sympathizes but wants her to become more prudent so that she won’t destroy herself.

Lenora Yoder, meanwhile, was fascinated by how two sisters can have such opposite personalities. Although this leads to conflict, she concluded that it also spurs them to grow in interesting new ways.

A number of students took up my invitation to think of Pride and Prejudice as a marriage manual. In her essay presentation, Kelly Culotta told us that her mother raised her as a “lady” (no burping in public) and that she internalized at an early age that she must grow up to be like Julie Andrews in order to get a man. Thus she loved the scene where Elizabeth, out of concern for Jane, improperly walks through the mud to Netherton. A real lady, Kelly concluded, is a woman with a strong sense of self, not someone who wears pearls.

Meg showed us covers of the magazines that adolescent girls read, such as Seventeen and Cosmopolitan, and talked about their advice about landing a man. While following such advice might get one a Collins or even a Bingley, Meg said that it cannot get you a Darcy, who is looking for someone with substance. One would therefore be far better off reading Pride and Prejudice than Cosmo.

Samantha Shortz wanted to figure out why so many of the relationships in Pride and Prejudice, starting with the Bennet marriage, go horribly wrong. She was eloquent on the many wrong reasons that people enter relationships and told stories of her own acquaintances who paraded their boyfriends to stir up envy. She took delight in lambasting Lydia for how she triumphs over her older sisters once she is married to Wickham.

Jacob, the one male in the class, was interested in how men are seen as property in Pride and Prejudice, as signaled by the famous opening passage:

IT is a truth universally acknowledged, that a single man in possession of a good fortune must be in want of a wife.

However little known the feelings or views of such a man may be on his first entering a neighborhood, this truth is so well fixed in the minds of the surrounding families, that he is considered as the rightful property of some one or other of their daughters.

His question: What does being seen as property do to the male characters’ sense of themselves.

His answer: It damages them. Bingley can’t figure out if women love him for himself or his money and so relies on Darcy to run interference. Being property gives Mr. Collins an inflated sense of himself and it does something similar to Darcy. Jacob pointed out that their two failed marriage proposals to Elizabeth have a lot in common.

Darcy, however, is able to rise above seeing himself as entitled property. Once he stops thinking that Elizabeth as lucky to get him—instead he must become worthy of her—the relationship can change. Collins, by contrast, gets a woman who marries him only because he is the heir to the Longbourn estate.

Emily wondered how Fanny is able to withstand the intense pressure to marry Henry Crawford given that she has been raised to think very little of herself and to do what others command. Emily argued that she is bolstered by progressive religious values, first instilled in her by Edmund.

Emily associated Fanny and Edmund with the progressive Anglicanism of William Wilberforce, who helped end the slave trade, and noted that Fanny saw herself as a kind of slave. (In one very uncharacteristic moment, she queries Sir Thomas about his own slaves in Antigua.) In standing up to the Bertrams, Fanny can be associated with those quiet but strong women who refuse to back down in the face of social injustice.

Sharon, meanwhile, wanted to figure out which marriage would have been best for Fanny. Although originally unimpressed by her marrying Edmund—the marriage seemed dull to her—she came around to the rightness of it as she imagined Fanny and Henry together. She realized that, unless Henry substantially changed, such a marriage would not work because Henry would only be attracted to the glitter of society whereas Fanny would require a life of substance. The same problems would arise in a Mary-Edmund marriage. In the end, therefore, Edmund-Fanny is the only marriage that has promise, and Sharon noted that their parish would be very lucky to have them as a pair.

Liz, who was fascinated by Henry, explored whether he was capable of changing in a way that would win him Fanny. She concluded that the decadent example of the Prince Regent and Henry’s upbringing by an admiral who keeps a mistress goes so deep that he is all but incapable of change. She contrasted him with Darcy, who can change because he has good values at his core.

In her presentation, Liz shared a Kanye West quote which not only summarizes Henry pretty well but also explains why people, especially celebrities, are still having Henry’s relationship problems today: “How could you be me and want to be someone else?”

Arielle and Mairin were interested in Emma’s manipulative behavior. Arielle compared both Emma and Mrs. Elton to the “mean girls” in the film of that name and noted that their desire to control comes out of a deep neediness. Mrs. Elton’s neediness, her status as a “Wanna Be,” makes a little more sense because of her lower class position. But why should “Queen Bee” Emma need to control Harriet?

Both Arielle and Mairin traced it back to the death of Emma’s mother and her lack of strong parental guidance as she is growing up. Mairin, constructing a psychological profile, noted that, by always getting her way as a child, Emma craves guidance, even though she tells herself that she doesn’t. Therefore she tries to give Harriet the guidance that she herself wants. She can only be truly happy, however, when she finds a partner who can provide this guidance.

Maya Schumacher was interested in how Persuasion mirrors Austen’s own life. She drew parallels between Wentworth and Tom LeFroy, Austen’s early love, which may have been broken up by his parents. Charles Musgrove’s proposal and Mr. Elliot’s likely proposal, meanwhile, are like the proposal of Harris Bigg-Wither, who proposed to Austen and was first accepted and then, the following day, turned down.

Maya argued that Austen is using her last complete novel to revisit her life’s decisions. By examining Anne, we can conclude that Austen regretted not marrying LeFroy, even though she understood why his parents thought otherwise. We also see that she was confident in her other decision.

Caitlin Schoen compared Anne with Liz Lemon on 30Rock. Getting older and feeling under pressure (including self-pressure) to get married, Liz can’t bring herself to marry someone who doesn’t fit the proper profile. Caitlin showed us a clip from the show where Liz’s boss Jack Donaghy works as a kind of Lady Russell, appearing in Liz’s head when she is on a date with a man whom likes but who has yet to find a job. Given how confident the man is about his future, his resemblance to Captain Wentworth is perfect.

Holding up the Croft marriage as an ideal, Caitlin argued that, having glimpsed the possibility of an egalitarian marriage with Wentworth, Anne becomes determined never to settle for anything less, which is why she turns down her other suitors.

Finally, Elizabeth Okundaye and Sophia Williams (not her real name) were interested in Anne’s lack of confidence and her inability to put her own needs first. Sophia compared Anne’s upbringing to her own: having a disabled sister meant that she had to subordinate her own desires. Sophia argued that Anne builds up the self confidence that is undermined by such a background by becoming indispensable in serving others. A commitment to caring for people leads her to become a powerful woman. Wentworth sees how indispensable she has become during the Louisa Musgrove accident, and other men start gravitating to her as well.

As always I was thrilled to see how Austen has stepped into the lives of my students and become an invaluable companion. I could see why they chose the works that they did and how Austen is helping them build upon their strengths. They are well on their way to becoming remarkable people.