On Labeling Survivors as “Crisis Actors” 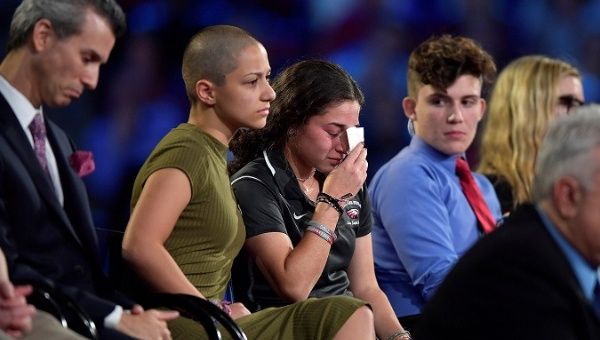 We once believed, before the Sandy Hook shootings, that rightwing indecency had its limits. Even the most cynical of us never imagined that anyone would accuse grieving parents of being “crisis actors.” Yet this has now become the go-to formula whenever friends and relatives of mass shooting victims complain about the proliferation of guns. Someone throws out an inflammatory charge, it gets disseminated through certain outlets, and suddenly the rightwing echo chamber is overflowing with the sound, as the students of Stoneman Douglas High School have been discovering this past week.

If you want a memorable image for this infernal feedback loop, Haruki Murakami provides one in Wind-Up Bird Chronicle.

From afar, these repeated cries of “crisis actor” might seem like an absurd fringe conspiracy, but they actually serve a wider purpose in enabling the far-right to sow disinformation and plant seeds of doubt that are later picked up by more mainstream right-wing news outlets.

What’s especially worrying is that it’s proven to be an incredibly effective technique, as a November study by researchers at the University of Alabama, Cyprus University of Technology, University College London, and Telefonica Research discovered. The researchers found that there was a direct path from rumors that originated on 4chan, The_Donald subreddit, and other right-wing echo chambers to mainstream news and social media sites, and concluded that “‘fringe’ communities often succeed in spreading alternative news to mainstream social networks and the greater Web.”

An example of this percolation could be seen on Fox News’ The Five Tuesday, when Greg Gutfeld suggested students protesting in the wake of the Parkland tragedy had been “co-opted.” It was a toned-down version of the Gateway Pundit’s smear, which suggested that student David Hogg was a FBI puppet and that students were being used as “marionettes by the far left and deep state.”

The process propels other ridiculous stories as well, from Obama’s Kenyon birth to Hillary Clinton’s pizza parlor sex ring to massive Democratic voter fraud that cost Trump the popular vote to the FBI being in the tank for Clinton. The charges never end, and they become so woven into GOP lore, feeding on themselves, that CPAC becomes worse every year. This past weekend attendees barely batted an eye—in fact they often cheered–when NRA head Wayne LaPierre hinted at armed rebellion, NRA spokesperson Dana Loesch claimed that the media loves mass killings for the ratings, and French neo-fascist Marion LePen proclaimed solidarity with Trump and Putin.

In Wind-Up Bird Chronicle, Murakami has a villain that I have compared to Trump, an empty but effective political figure who feeds on people’s insecurities. Protagonist Toru Okada, his brother-in-law, confronts him at one point with “the story of the monkeys of the shitty island.” Think of the island as the GOP ecosystem:

“Somewhere, far, far away, there’s a shitty island. An island without a name. An island not worth giving a name. A shitty island with a shitty shape. On this shitty island grow palm trees that also have shitty shapes. And the palm trees produce coconuts that give off a shitty smell. Shitty monkeys live in the trees, and they love to eat those shitty-smelling coconuts, after which they shit the world’s foulest shit. The shit falls on the ground and builds up shitty mounds, making the shitty palm trees that grow on them even shittier. It’s an endless cycle.”

In Murakami’s novel, the villain can be defeated only if people first do a deep inner dive to figure out how they lost their way. Then they must courageously stand up for what is right, as Toru and Kumiko stand up for their marriage. Republicans who want to save their party should take note.