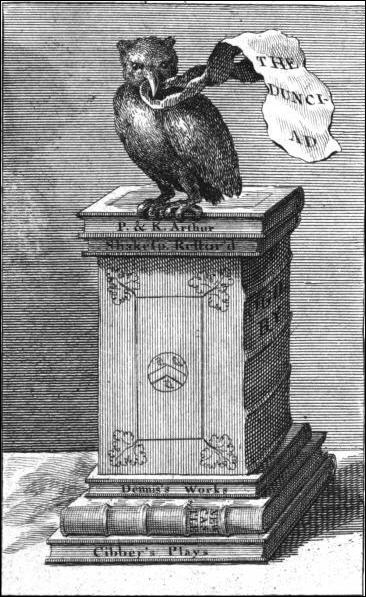 In 1742, convinced that his country was falling prey to universal stupidity (or dullness), Alexander Pope composed the fourth book of The Dunciad.  I wrote about Pope’s poem eight years ago, but then it was in reference to rightwing media pundits like Glenn Beck and Rush Limbaugh. Little did I know that the dunces would take over the White House and eventually infect most Congressional Republicans.

In other words, The Dunciad is more relevant than ever.

In the poem, Pope satirizes the hack writers of his day, whom he regards as evidence that culture has lost its way. In Book IV he imagines Chaos and Night, two of Satan’s friends in Paradise Lost, preparing to take over the world. (I’ve myself have compared Trump’s followers to Satan’s friends in a past post.) The result will be “Saturnian days of lead and gold,” Saturn being an astrological sign associated with depression and limitation:

Then rose the Seed of Chaos, and of Night,
To blot out Order, and extinguish Light,
Of dull and venal a new World to mold,
And bring Saturnian days of Lead and Gold.

Pope imagines the Goddess Dullness mounting her throne in triumph. The poet on her lap is Colley Cibber, England’s poet laureate whom Pope considered (with good reason) to be a fraud. For our purposes, replace Cibber with our reality television president, who claims to be “like, really smart” and “a stable genius.” Or better yet, think of Dullness as Trump and Cibber as formerly respectable Republicans like Orrin Hatch, Lindsey Graham, and Chuck Grassley, who have fallen under his spell:

She mounts the Throne: her head a Cloud concealed,
In broad Effulgence [brightness] all below revealed,
(‘Tis thus aspiring Dullness ever shines)
Soft on her lap her Laureate son reclines.

Dullness’s court, like Trump’s, persecutes intelligence. “Science” is in chains and those who would use their wit to speak truth to power face punishment. Logic, meanwhile, is gagged and bound, and noble rhetoric has been stripped and blunted. In rhetoric’s place we have sophistry and billingsgate (obscenity):

Beneath her foot-stool, Science groans in Chains,
And Wit dreads Exile, Penalties and Pains.
There foamed rebellious Logic, gagged and bound,
There, stripped, fair Rhetoric languished on the ground;
His blunted Arms by Sophistry are born,
And shameless Billingsgate her Robes adorn.

I can’t even begin to list all the ways that the Trump administration and Trump supporters fit this description, engaging in attacks on science, wit (intelligence), logic, and the high art of rhetoric (we get demagoguery instead). Pope observes that morality is now being strangled by lawyers and church officials—in our case Trump’s spokespeople and rightwing Christians:

Morality, by her false Guardians drawn,
Chicane [trickery] in Furs, and Casuistry in Lawn [church linen],
Gasps, as they straiten at each end the cord,
And dies, when Dullness gives her Page the word.


The higher principles represented the arts are also under attack. High-minded tragedy, Pope imagines, is about ready to kill herself. Good natured comedy (Thalia) too is threatened but is being sustained by satire, just as many Americans today are sustained by our own satirists. History, meanwhile, isn’t willing to back off. She will be back to tell the sorry story of the age:

But held in ten-fold bonds the Muses lie,
Watched both by Envy’s and by Flattery’s eye:
There to her heart sad Tragedy addressed
The dagger wont to pierce the Tyrant’s breast;
But sober History restrained her rage,
And promised Vengeance on a barbarous age.
There sunk Thalia, nerveless, cold, and dead,
Had not her Sister Satyr held her head:

As the poem comes to an end, Pope imagines the goddess yawning and the yawn spreading to the entire world. (As he puts it, “More she had spoke, but yawn’d — All Nature nods:/ What Mortal can resist the Yawn of Gods?”). With that, all the lights of wit and culture begin to go out, just like the 100 eyes of Argus, the mythological giant, under the spell of Hermes. And just like the GOP succumbing to Trumpism:

She comes! she comes! the sable Throne behold
Of Night Primeval, and of Chaos old!
Before her, Fancy’s gilded clouds decay,
And all its varying Rainbows die away.
Wit shoots in vain its momentary fires,
The meteor drops, and in a flash expires.
As one by one, at dread Medea’s strain,
The sickening stars fade off th’ethereal plain;
As Argus’ eyes by Hermes’ wand oppressed,
Closed one by one to everlasting rest . . .

In this dreadful scenario, art flees and truth finds itself buried under casuistry—which today could be seen as the word salads and whataboutism regularly served up by Trump supporters to defend the president:

Thus at her felt approach, and secret might,
Art after Art goes out, and all is Night.
See skulking Truth to her old Cavern fled,
Mountains of Casuistry heaped o’er her head!

Trump and his rightwing Christian followers, meanwhile, preach a gospel that looks nothing like the actual teachings of Jesus:

Religion blushing veils her sacred fires,
And unawares Morality expires.
Nor public Flame, nor private, dares to shine;
Nor human Spark is left, nor Glimpse divine!

All of this leads to a great crescendo:

Lo! thy dread Empire, Chaos! is restored;
Light dies before thy uncreating word:
Thy hand, great Anarch! lets the curtain fall;
And Universal Darkness buries All.

I like the notion of “uncreating word” applied to Trump and the current GOP. They aren’t building anything of substance, just “uncreating” what great people before them have created. They are anarchists who hope to profit from the chaos by rewarding  wealthy donors and themselves.

Like all great satire, Pope’s poem is designed to stir up resistance so that “universal darkness” doesn’t ultimately prevail. How will the American people respond?

David Brooks makes a couple of relevant points in his New York Times column today, one critical of Trump supporters and one of Trump critics. The supporters, like Pope’s hack writers, are guilty of “lowbrowism,” whose intent is to make everyone more stupid:

Fox News pioneered modern lowbrowism. The modern lowbrow (think Sean Hannity or Dinesh D’Souza) ignores normal journalistic or intellectual standards. He creates a style of communication that doesn’t make you think more; it makes you think and notice less. He offers a steady diet of affirmation, focuses on simple topics that require little background information, and gets viewers addicted to daily doses of righteous contempt and delicious vindication.

Brooks adds, however, that there is a corresponding danger of overreacting, and Pope might himself be accused of doing so with his warning of “universal darkness.” After all, the world did not end in 1742.

The important thing is to focus on policy rather than Michael Wolff-style scandal narratives. If you want to talk to people who have genuine concerns about Trump, talk to Dreamers, Haitian and El Salvadoran refugees, people living on the coasts (who will see increased offshore oil drilling with rolled back regulations), national park lovers, transgender people, the prison population, those living on the Korean peninsula, and all who stand to be impacted by climate change. After all, dismissing critics as hysterical can also mean ignoring legitimate criticism: Jonathan Chait notes that Brooks also criticized attacks of George W. Bush, who was responsible for the biggest foreign policy debacle since Vietnam and the melting down of the financial markets, leading to the most severe recession since the Great Depression. Maybe Brooks is sees hysteria in what is actually urgency.