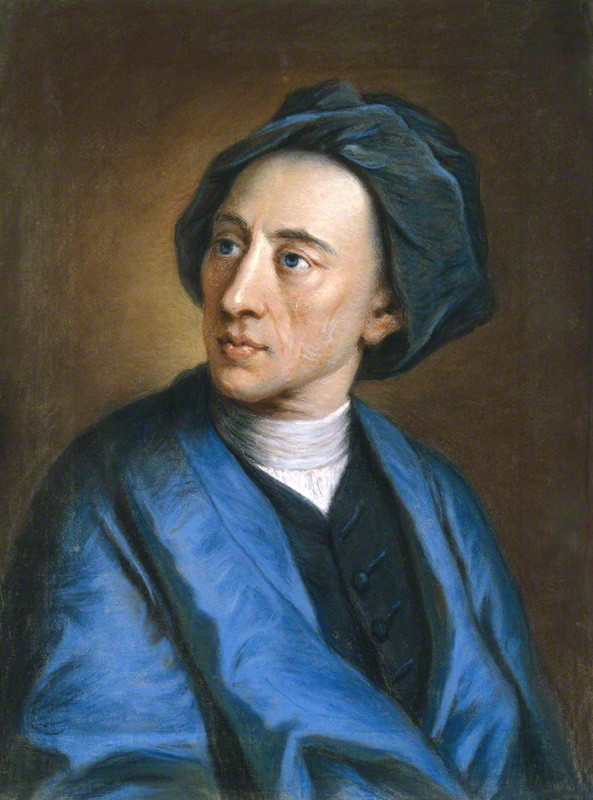 If Donald Trump becomes America’s next president, it may be because the electorate has come to see the abhorrent as normal. Adam Gopnik of The New Yorker, warning against such normalization, has turned to Alexander Pope’s Essay on Man to spell out how it happens.

Essay on Man is Pope’s ambitious attempt to make sense of humanity in all its contradictions. It was written for a more optimistic age, and Voltaire would satirize in Candide its assertion that “whatever is, is right.” However, as Harvard’s Helen Vendler notes in Poets Thinking, Pope is not setting forth a systematic philosophy but rather exploring ideas, and among his concerns is how we rationalize vice.

In the moments leading up to the passage quoted by Gopnik, Pope has been talking about how all of us are a blend of vice and virtue. In fact, the seven deadly sins, when practiced in moderation, are actually virtues. For instance:

See anger, zeal and fortitude supply;
Even avarice, prudence; sloth, philosophy;
Lust, through some certain strainers well refined,
Is gentle love, and charms all womankind;
Envy, to which th’ ignoble mind’s a slave,
Is emulation in the learned or brave…

It thus can be difficult to determine that point at which virtue slides into vice:

As, in some well-wrought picture, light and shade,
And oft so mix, the difference is too nice
Where ends the virtue or begins the vice.

While conceding that it is sometimes difficult to determine where virtue leaves off and vice begins, however, Pope says it is still possible to distinguish between the two. In other words, he warns against moral relativism. Pope’s warning is timely since we see many asserting a false equivalence, arguing that Trump is no worse than the conventional Democrat Hillary Clinton. Gopnik quotes the passage to conclude his article:

Fools! who from hence into the notion fall,
That vice or virtue there is none at all.
If white and black blend, soften, and unite
A thousand ways, is there no black or white?
Ask your own heart, and nothing is so plain;
’Tis to mistake them, costs the time and pain.

In other words, if you consult your heart you will know the difference between white and black, between right and wrong—and, I would add, between Clinton and Trump. It’s when you take time and effort (pain) to confuse or mistake them that you get into trouble.

Pope goes on to complicate the argument further. While our heart may know the difference, confusion can still occur for those who become overly familiar with vice. Gopnik opens his article with the following psychological description:

Vice is a monster of so frightful mien,
As, to be hated, needs but to be seen;
Yet seen too oft, familiar with her face,
We first endure, then pity, then embrace.

To sum it up, we know at first glance, by consulting our heart, what is right and what is wrong. But that first glance can be overridden by familiarity.

Gopnik outlines that many of Trump’s former opponents are following the Endure-Pity-Embrace model to reconcile with him:

The three-part process by which the gross becomes the taken for granted has been on matchlessly grim view this past week in the ascent of Donald Trump. First merely endured by those in the Republican Party, with pained grimaces and faint bleats of reluctance, bare toleration passed quickly over into blind, partisan allegiance—he’s going to be the nominee, after all, and so is our boy. Then a weird kind of pity arose, directed not so much at him (he supplies his own self-pity) as at his supporters, on the premise that their existence somehow makes him a champion for the dispossessed, although the evidence indicates that his followers are mostly stirred by familiar racial and cultural resentments, of which Trump has been a single-minded spokesperson.

Now for the embrace. One by one, people who had not merely resisted him before but called him by his proper name—who, until a month ago, were determined to oppose a man they rightly described as a con artist and a pathological liar—are suddenly getting on board. Columnists and magazines that a month ago were saying #NeverTrump are now vibrating with the frisson of his audacity, fawning over him or at least thrilling to his rising poll numbers and telling one another, “We can control him.”

To cite just one example of someone who has turned 180 degrees, former Texas Governor Rick Perry now wants to be Trump’s vice president. This after, last July, calling Trump “a cancer on conservatism” and accusing him of being a “sower of discord” who

foments agitation, thrives on division, scapegoats certain elements of society, and offers empty platitudes and promises. He is without substance when one scratches below the surface.

He offers a barking carnival act that can be best described as Trumpism: a toxic mix of demagoguery, mean-spiritedness and nonsense that will lead the Republican Party to perdition if pursued.

To those who think they can control Trump, Gopnik has a definitive answer:

No, you can’t. One can argue about whether to call him a fascist or an authoritarian populist or a grotesque joke made in a nightmare shared between Philip K. Dick and Tom Wolfe, but under any label Trump is a declared enemy of the liberal constitutional order of the United States—the order that has made it, in fact, the great and plural country that it already is. He announces his enmity to America by word and action every day. It is articulated in his insistence on the rightness of torture and the acceptable murder of noncombatants. It is self-evident in the threats he makes daily to destroy his political enemies, made only worse by the frivolity and transience of the tone of those threats. He makes his enmity to American values clear when he suggests that the Presidency holds absolute power, through which he will be able to end opposition—whether by questioning the ownership of newspapers or talking about changing libel laws or threatening to take away F.C.C. licenses. To say “Well, he would not really have the power to accomplish that” is to misunderstand the nature of thin-skinned authoritarians in power. They do not arrive in office and discover, as constitutionalists do, that their capabilities are more limited than they imagined. They arrive, and then make their power as large as they can.

The American Republic stands threatened by the first overtly anti-democratic leader of a large party in its modern history—an authoritarian with no grasp of history, no impulse control, and no apparent barriers on his will to power. The right thing to do, for everyone who believes in liberal democracy, is to gather around and work to defeat him on Election Day. Instead, we seem to be either engaged in parochial feuding or caught by habits of tribal hatred so ingrained that they have become impossible to escape even at moments of maximum danger.

Gopnik concludes by describing the long-term damage that Trump can do and the pain we will undergo if we don’t stop him:

The national psyche never gets over learning that its institutions are that fragile and their ability to resist a dictator that weak. If he can rout the Republican Party in a week by having effectively secured the nomination, ask yourself what Trump could do with the American government if he had a mandate. Before those famous schoolroom lines, Pope made another observation, which was that even as you recognize that the world is a mixed-up place, you still can’t fool yourself about the difference between the acceptable and the unacceptable: “Fools! who from hence into the notion fall/That vice or virtue there is none at all,” he wrote. “Is there no black or white? / Ask your own heart, and nothing is so plain; / ’Tis to mistake them, costs the time and pain.” The pain of not seeing that black is black soon enough will be ours, and the time to recognize this is now.

I have been a Democrat all my life, but if Trump were a Democrat running against Romney or McCain or one of the Bushes, I would vote Republican. There is no excuse for voting for Trump. Ask your own heart and nothing is so plain.

A Mary Oliver passage from “An Old Whorehouse” came to mind as I read Gopnik’s concerns about voters coming to accept Trump as normal. It’s about children exploring an abandoned brothel and excitedly imagining what occurred there. Perhaps they’re not unlike those who are titillated by Trump’s unconventional prescriptions and his political incorrectness. The poem concludes,

It would be years before
we’d learn how effortlessly

sin blooms, then softens,
like any bed of flowers.