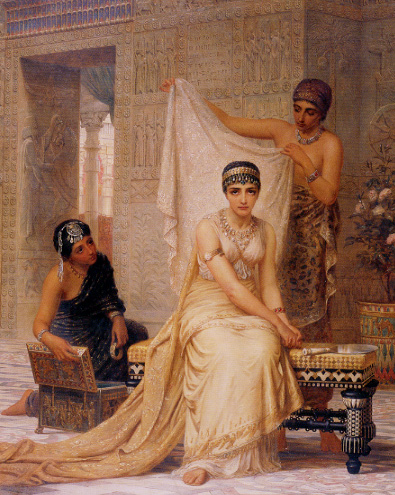 This coming Wednesday is the Jewish holiday of Purim, which celebrates Queen Esther thwarting a planned genocide against the Jews during the reign of the Persian emperor Ahasuerus or Xerxes.  Searching the internet, I discovered an interesting poem told from Esther’s point of view by one Rabbi Rachel Barenblat, who runs the wonderfully named blog The Velveteen Rabbi.

Put in feminist terms, Barenblat rescues Esther from the feminine mystique and liberates her from the male gaze. This is one reason why we need female as well as male rabbis.

Vashti, incidentally, is the king’s first queen, whom he dismissed (and chose Esther) after she refused to strip for his people. Haman is the counselor who got the king to order the slaughter of the Jews and who eventually, after Esther’s maneuvering, was hanged himself (“karma’s a bitch”).

Vashti, the first favorite
was well before my time, though
I still wonder sometimes
why he asked her to strip.
Maybe he’d grown tired of her
and needed an excuse.

Of course I use my body
to get what I need: what woman
doesn’t? But until now
all I’ve needed were clothes,
bread, the freedom to read
in a quiet corner of the room.

The story ends in celebration
and bloodshed, a revenge fantasy
your children will retell
for generations, but listen–
I’m not a paragon of virtue.
I’m not your blank canvas.

I was never hiding. I’m not
a Torah scroll to be concealed
behind ornate walls, then
revealed bit by bit (here a flash
of ankle, there a glimpse of hip)
for your viewing pleasure.

I’m not God, veiling My face
like the newest of moons.
I’m a dark-skinned Persian girl
raised on twisty Shushan streets
who gambled for a favor
and won.