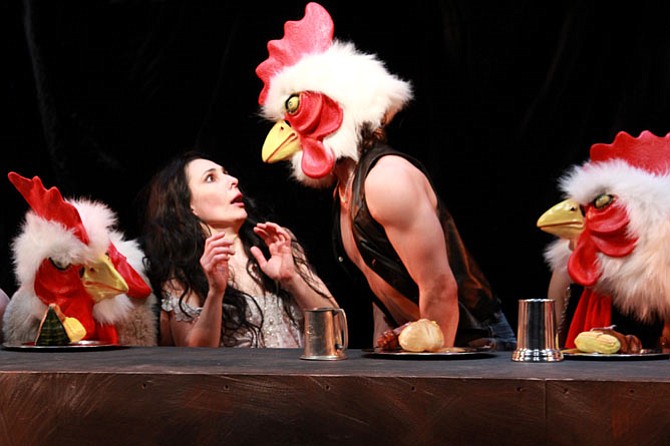 Synetic Theater version of “Taming of the Shrew”

St. Mary’s is currently on fall break and, to celebrate, Julia and I joined friends at a Taming of the Shrew production by Crystal City, Virginia’s Synetic Theater. Synetic is famous for producing non-verbal versions of Shakespeare plays—they resort to movement, acrobatics, dance, and special visual effects—and its version thoroughly energized us.

Taming of the Shrew is one of Shakespeare’s problem plays (I wrote about another recently), so I was interested to see how the troupe would handle it. Just as we worry that Shakespeare endorses anti-Semitism in Merchant of Venice, so we worry that he endorses misogyny in Shrew. To salvage the play, productions will sometimes contend that Kate only performs an ironic surrender at the end. Some even have her and Petrucchio exchanging knowing winks as she abases herself while chastising the other wives for not slavishly obeying their husbands’ frivolous demands:

Thy husband is thy lord, thy life, thy keeper,
Thy head, thy sovereign; one that cares for thee,
And for thy maintenance commits his body
To painful labour both by sea and land,
To watch the night in storms, the day in cold,
Whilst thou liest warm at home, secure and safe;
And craves no other tribute at thy hands
But love, fair looks and true obedience;
Too little payment for so great a debt.
Such duty as the subject owes the prince
Even such a woman oweth to her husband;
And when she is froward, peevish, sullen, sour,
And not obedient to his honest will,
What is she but a foul contending rebel
And graceless traitor to her loving lord?
I am ashamed that women are so simple
To offer war where they should kneel for peace;
Or seek for rule, supremacy and sway,
When they are bound to serve, love and obey.
Why are our bodies soft and weak and smooth,
Unapt to toil and trouble in the world,
But that our soft conditions and our hearts
Should well agree with our external parts?
Come, come, you forward and unable worms!
My mind hath been as big as one of yours,
My heart as great, my reason haply more,
To bandy word for word and frown for frown;
But now I see our lances are but straws,
Our strength as weak, our weakness past compare,
That seeming to be most which we indeed least are.
Then vail your stomachs, for it is no boot,
And place your hands below your husband’s foot:
In token of which duty, if he please,
My hand is ready; may it do him ease.

I must say that I see no way to read this passage against the grain. I find Kate a much less interesting character than, say, Chaucer’s Wife of Bath, who is thoroughly confused in how she should respond to a patriarchal society that condemns her for being a brash, independent woman. Sometimes the Wife strikes back directly, sometimes she rebels in subversive ways, and sometimes she tries to conform to the patriarchal program, only to erupt when she realizes that a woman can never surrender enough. The power of Chaucer’s portrayal lies in her thrashing around.

Kate, on the other hand, seems clearly to have signed on to a male fantasy of gender roles, as though she was just waiting for a suitor manly enough to put her in her place. Every woman loves a fascist, I imagine her saying.

This is a “problem” because, in most of his plays—certainly in his greatest plays—Shakespeare creates such three-dimensional characters that they resist ideological stereotyping. Normally, the Bard is not of an age but of all time. To cite one example, Twelfth Night is a dazzling exploration of the complexities of gender identity.

So to suddenly see Shakespeare indulging in a male fantasy while failing to acknowledge a woman’s full humanity is disturbing. Whatever his beliefs—in their daily lives Shakespeare and Chaucer were probably men of their times—his artistry usually takes him to a deeper place. But not, I think, in this case.

Synetic Theater solved the problem by adding a few softening touches and changing the ending. (It’s easier to pull this off if you’re not tied to Shakespeare’s actual words.) We are given an explanation for some of Kate’s hardness—she lost her mother—and for Petruchio’s as well—he’s an artist in a slump. Their back and forth, therefore, become a version of all the struggles a couple go through in adjusting to a marriage. The marital fireworks serve to lower inhibitions and make possible an exchange of vulnerabilities.

In the end, Petruchio is chastened when Kate walks out on him (not an option in Elizabethan England), and Kate is won over when she learns that she has reignited Petruchio’s creativity (she discovers he has painted large portraits of her.) Having watched them achieve an egalitarian balance, we can believe they will live happily ever after.

In a relationship, negotiations between people take crazy twists and turns as the couple grapples with social expectations, family histories, and the individuality of the other. The Syncretic production may not have had Shakespeare’s gorgeous language, but it did a better job with gender balance.