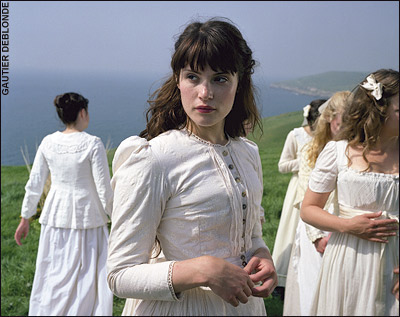 Kinski in “Tess of the D’Urbervilles”

I am currently in Manhattan to attend today’s christening of Alban Lee Bates, my six-month-old grandson, and have chosen a passage from Thomas Hardy’s Tess of the D’Urbervilles to commemorate the event. Alban is being baptized in St. Ignatius Loyola on Park and E. 84th Street, which is Darien and Betsy’s church.

The passage may seem a strange choice given that (a) it involves a child who is dying and (b) it occurs outside the confines of the church. But its urgency speaks to a conversation that I had with my friends Dan and Sue Schmidt this past week. Dan is a pastor and Sue a friend who I came to know from her regular responses to this blog.

Although Dan himself doesn’t come from an infant baptism tradition, he was talking about the felt need that people have to participate in certain church rituals, even though they themselves are not churchgoers. While it is true that we no longer believe, as Tess believes, that unbaptized babies cannot enter heaven (many, in fact, no longer believe in heaven), nevertheless there are many families that continue to come to church for baptisms.

Dan wondered whether it was for insurance—we don’t want to deny our child something that may be important, although we can’t say what. As such, it may point to deeply buried spiritual belief, an indirect way of acknowledging a power that is beyond us.

Sometimes we are given insight into these underlying motivations when the ritual occurs outside the normal parameters. This occurs in Tess of the D’Urbervilles. Tess’s newborn infant is dying but Tess’s father has locked the door so that the rector can’t enter. As a result, Tess chooses to baptize the child herself. What emerges is an intensely spiritual moment, a baptism that is true to the spirit even thought it is not orthodox:

She lit a candle, and went to a second and a third bed under the wall, where she awoke her young sisters and brothers, all of whom occupied the same room. Pulling out the washing-stand so that she could get behind it, she poured some water from a jug, and made them kneel around, putting their hands together with fingers exactly vertical. While the children, scarcely awake, awe-stricken at her manner, their eyes growing larger and larger, remained in this position, she took the baby from her bed—a child’s child—so immature as scarce to seem a sufficient personality to endow its producer with the maternal title. Tess then stood erect with the infant on her arm beside the basin; the next sister held the Prayer-Book open before her, as the clerk at church held it before the parson; and thus the girl set about baptizing her child.

Her figure looked singularly tall and imposing as she stood in her long white nightgown, a thick cable of twisted dark hair hanging straight down her back to her waist. The kindly dimness of the weak candle abstracted from her form and features the little blemishes which sunlight might have revealed—the stubble scratches upon her wrists, and the weariness of her eyes—her high enthusiasm having a transfiguring effect upon the face which had been her undoing, showing it as a thing of immaculate beauty, with a touch of dignity which was almost regal. The little ones kneeling round, their sleepy eyes blinking and red, awaited her preparations full of a suspended wonder which their physical heaviness at that hour would not allow to become active.

The most impressed of them said:

“Be you really going to christen him, Tess?”

The girl-mother replied in a grave affirmative.

“What’s his name going to be?”

She had not thought of that, but a name suggested by a phrase in the book of Genesis came into her head as she proceeded with the baptismal service, and now she pronounced it:

“SORROW, I baptize thee in the name of the Father, and of the Son, and of the Holy Ghost.”

She sprinkled the water, and there was silence.

Here she dipped her hand into the basin, and fervently drew an immense cross upon the baby with her forefinger, continuing with the customary sentences as to his manfully fighting against sin, the world, and the devil, and being a faithful soldier and servant unto his life’s end. She duly went on with the Lord’s Prayer, the children lisping it after her in a thin gnat-like wail, till, at the conclusion, raising their voices to clerk’s pitch, they again piped into silence, “Amen!”

Then their sister, with much augmented confidence in the efficacy of the sacrament, poured forth from the bottom of her heart the thanksgiving that follows, uttering it boldly and triumphantly in the stopt-diapason note which her voice acquired when her heart was in her speech, and which will never be forgotten by those who knew her. The ecstasy of faith almost apotheosized her; it set upon her face a glowing irradiation, and brought a red spot into the middle of each cheek; while the miniature candle-flame inverted in her eye-pupils shone like a diamond. The children gazed up at her with more and more reverence, and no longer had a will for questioning. She did not look like Sissy to them now, but as a being large, towering, and awful—a divine personage with whom they had nothing in common.

It’s as though baptism has given Tess a way to find solace while facing the worst event one can imagine, a horror that threatens to strip life of all meaning. Maybe that’s one reason why nonbelievers baptize their children–it’s as though they are giving them an extra fighting chance, as though vulnerable infants (and the parents who themselves are experiencing new feelings of vulnerability) need all the help they can get. Rituals aren’t logical. In fact, their power derives in part from the lack of earthly logic.

Tess may intuitively tap into some of baptism’s deeper currents, but she has doubts in retrospect. She therefore looks for validation to the rector, who can’t figure out why he has been excluded. He has mixed feelings but in the end relies on the spirit rather than the law:

Having the natural feelings of a tradesman at finding that a job he should have been called in for had been unskilfully botched by his customers among themselves, he was disposed to say no. Yet the dignity of the girl, the strange tenderness in her voice, combined to affect his nobler impulses—or rather those that he had left in him after ten years of endeavour to graft technical belief on actual scepticism. The man and the ecclesiastic fought within him, and the victory fell to the man.

I pray that, in today’s (orthodox) christening, we will enter as fully into the baptismal moment as Tess does.

This entry was posted in Hardy (Thomas) and tagged baptism, Spirituality, Tess of the D'Urbervilles, Thomas Hardy. Bookmark the permalink. Post a comment or leave a trackback: Trackback URL.