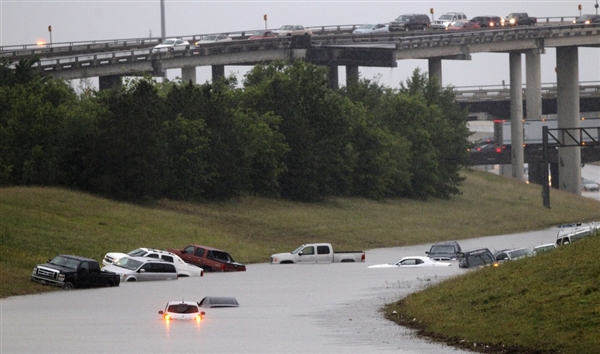 As I watch the extreme weather occurring in Texas and California, I am reminded of a blackly humorous Kingston Trio song from my childhood:

They’re rioting in Africa,
They’re starving in Spain,
There are hurricanes in Florida,
And Texas needs rain.

The song cheerfully adds that humans are on the verge of blowing themselves up: “Someone will set the spark off/And we will all be blown away.”

Who could have predicted then that (1) we were creating hurricanes and droughts just as we had created the atom bomb, albeit not deliberately, and (2) by the early 21st century more humans would have been killed by human-caused climate change than by nuclear weapons. Climate scientists are pretty sure that Texas’ rainstorms are attributable to the warming Gulf of Mexico waters, which are putting far more moisture into the air than normal. At least Texas no longer needs rain.

Of course, try telling this to the political right and to those fossil fuel barons like the Koch brothers, who would rather attack climate scientists than save the planet. When I think of climate denialism, I am put in mind of John Donne’s “Valediction Forbidding Mourning.” Given that Donne’s tender poem is about his spiritual connection with his wife when he is traveling, I know this sounds far-fetched so allow me to explain.

As the poem begins, Donne talks about two kinds of people. There are those who focus on immediate cataclysm and there are those who take a longer or more elevated view. Most of us, when we are dying or when we face a long separation, engage in “tear-floods” and “sigh-tempests.” We emotionally react when we encounter a “moving of th’ earth,” whether figurative or literal.

In terms of climate change, we as a country react to such extreme climate events like the Texas floods and Hurricane Sandy. We don’t react, however, to global warming, which in the poem is comparable to Donne’s “trepidation of the spheres” or movement of the stars. The 17th century saw such movement as having a profound effect on worldly events but it seemed “innocent” because it didn’t have immediate ramifications. Here are Donne’s opening stanzas:

As virtuous men pass mildly away,
And whisper to their souls to go,
Whilst some of their sad friends do say
The breath goes now, and some say, No:

So let us melt, and make no noise,
No tear-floods, nor sigh-tempests move;
‘Twere profanation of our joys
To tell the laity our love.

Moving of th’ earth brings harms and fears,
Men reckon what it did, and meant;
But trepidation of the spheres,
Though greater far, is innocent.

“Virtuous men,” in other words, see the deep workings of the universe and make connections. One image of connection in the poem is a fine golden thread joining the separated couple, metaphor of their spiritual union. Most eyes can’t see this thread.

Although that being said, one no longer needs sensitive eyes to detect climate change. The evidence is now there for all to see.

One more note on Donne vision of the universe: in his poem “The Good Morrow” he describes a balanced earth. Asserting that “whatever dies was not mixed equally,” he imagines two lovers as a planet “without sharp north, without declining west.” This is a relationship that is built for the long haul.

We should have the same vision for our actual planet.