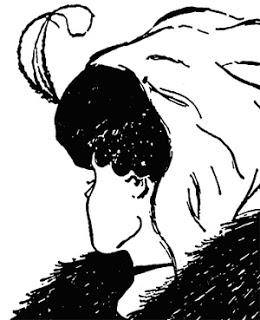 My novelist friend Rachel Kranz is currently visiting me, which means that we are having long conversations about the impact of literature on readers’ lives. Rachel, who in addition to being a writer is a 61-year-old poker player, alerted me to her latest post on her Adventures in Poker blog about what it means to be addressed as “young lady” at the poker table.

The post, Rachel says, was inspired by a passage from Muriel Spark’s lacerating novel Memento Mori, which centers on a group of elderly women confined to a government nursing home in postwar England.  You can predict how Rachel feels about the “young lady” appellation once you know the plot of the book. Miss Taylor, a dignified and intelligent woman who can’t live on her own any longer because of her health problems, must submit to the humiliating routine of the home, in which every patient is called “Granny” rather than the more dignified “Miss” or “Mrs.” Just because they are called “Granny,” however, doesn’t mean that the patients are accorded special respect. Instead, they are treated like children, called “girl,” and patronizingly told how young they look:

I share Rachel’s post below but first here’s a passage from Memento Mori to give you a taste of the indignities that the patients undergo:

A year ago, when admitted to the ward, she had suffered misery when addressed as Granny Taylor, and she thought she would rather die in a ditch than be kept alive under such conditions. But she was a woman practiced in restraint; she never displayed her resentment. The lacerating familiarity of the nurses’ treatment merged in with her arthritis, and she bore them both as long as she could without complaint. Then she was forced to cry out with pain during a long haunted night when the dim ward lamp made the beds into grey-white lumps like terrible bundles of laundry which muttered and snored occasionally. A nurse brought an injection.

The arthritic pain subsided, leaving the pain of desolate humiliation, so that she wished rather to endure the physical nagging again. . . .

Miss Taylor spent much time considering her position. The doctor’s “Well, how’s Granny Taylor this morning? Have you been making your last will and test—“ would falter when he saw her eyes, the intelligence. She could not help hating these visits and the nurses giving her a hair-do, telling her she looked like sixteen. . .

Young Lady and the Cool Kids: Insults Disguised as Pleasantries

Travel back in time a few weeks with me…

“Hello, young lady!” the dealer sings out to me.

He’s an elegant African-American man, probably in his early sixties, who approaches our table with a flair that makes me think of New Orleans—theatrical, authoritative, assured, a practiced friendliness that insists nevertheless on dignity, respect, and zero doubt about who is in charge of the table.

I am a white woman of 61, in my usual tournament getup—disheveled, despite my best attempts at looking classy and put-together, with what’s supposed to be a perky short haircut, a clingy blouse under a loose open shirt (“Yes, I have boobs, but we don’t have to make a big deal of it”), and the kind of energy that gets me through 14-hour tournament days and often causes people to assume I’m ten to fifteen years younger.  Which makes me at least 46—that is, somewhere between middle-aged and old.

“Neither young nor a lady,” I sing back with my most charming smile—my standard rejoinder, and one that usually gets the knowing laugh I am going for.

Usually, too, the dealer acknowledges my request so I can stop talking about sexual politics and concentrate on my game.

Not this time.  “I have to call you something,” he insists, smiling broadly.

“Why not Rachel?” I suggest, my smile equally broad.  “That’s my name.”

“But I’ve got all these people to take care of,” he says, somehow managing to start the shuffle while gesturing dramatically to my eight colleagues.  “I’ll never remember that.”

He shakes his head.  “That’s not polite,” he insists.  Clearly, this is now a power struggle—okay. Big guns coming.

He keeps smiling while dramatically turning his face away from me and pretending to smoke a cigarette:  “Whew!  Wow.  Okay.  Whew.”

One of the young men at the table looks at me—I think, belligerently, but after both he and the dealer have left, the table tells me he wasn’t being hostile, just confused.

“So what do you want to be called?” the young man asks, belligerently-or-genuinely-depending-on-your-perspective.  “Old lady?”

Two more minutes of political education and we are finally back to the game.  The problem is, if I don’t say anything, “young lady” continues.  If I do say something, it becomes a thing—though usually not this much of a thing.  Either way, as my former coach would point out, it’s energy that belongs on poker, not politics.  What sucks about being a woman of my age at the table is that my gender and age make me by definition an outsider—someone who doesn’t belong, who maybe even can’t belong.  The cool kids are all young, mainly white, almost all guys.  The women among them are often dating cool guys; a lot of the guys are friends with each other.  At the very least, they’re potential partners, potential friends, roommates, study partners.  And then there’s me.

Don’t bring out the violins just yet.  I’m enormously lucky to have the resources to show up at these tables, to study with a coach, to travel to Vegas and Florida and Barcelona.  I’m an outsider in most things I do—the lefty who writes novels, the theater artist who plays poker, the gadfly, the arguer, the nudge. That’s a Yiddish word, pronounced noodge, and I suppose the quickest definition I can give you is Allen Kessler—someone who keeps seeing problems that other people miss, deny, or would prefer to ignore and who won’t let up until some kind of solution is found.  Yeah, we’re annoying—but if you like that 250-500 level, you can thank Allen, and if you like votes for women, gay marriage, the 40-hour work week, or integrated drinking fountains, you can thank all the nudges throughout history who kept saying, “I don’t agree,” “No, you can’t,” and “Neither young nor a lady.”

Or so I would like to believe.  Of course, I don’t do it for “the cause”—I do it because “young lady” burrows right into my skin and stays there like some smiling, infectious tick, swelling with my stolen blood until finally I have to grab a lighted candle and burn the damn thing off.  For someone my age, “young lady” means, “Young is good and old is bad, so out of politeness, we’ll pretend you’re young even though you’re obviously old.” It means, “You’re so old and ugly and asexual, we’re going to elaborately ignore it by talking to you as we would a 12-year-old.”  It means, “You don’t belong here, so we’re going to jokingly act as though you do.  Don’t you appreciate that?  Or would we rather call you what you are—old lady?”

I am old, obviously, if by old you mean 61, as opposed to 41 or 31 or 21.  It’s only when “old” is a dirty word—unattractive, senile, set in your ways—that it becomes an insult.  “Young lady” hurts because you can’t imagine it being used to indicate a drop-dead gorgeous woman of any age, let alone a woman of any presence or authority.  Angela Bassett is three years younger than I am.  Can you imagine calling her “young lady”? Jessica Lange is six years older—who would ever call her “young lady?” Meryl Streep? Susan Sarandon? Grace Jones?

If I stretch my imagination, I can just barely imagine a sexy, playful version of “young lady”—just barely—but most of the time, it’s an insult disguised as a pleasantry.  As this particular dealer pointed out, he was actually older than me (at least, he said he was), but I’ve been called “young lady” by guys in their twenties or thirties, which is even more insulting, an even clearer statement that I’m completely disqualified from ordinary social circles—no longer cool, interesting, sexual, or even normal, but rather someone who has to be treated with the kind of condescension and fake friendliness normally reserved for children.

Guys, if you’re still with me, try this.  Think of some quality about yourself that you believe makes you unattractive or undateable to your preferred gender.  Is it your height?  Your weight?  Your bank balance?  Your equipment? Which quality seems to disqualify you from being one of the cool kids, the attractive people, the desirable ones?

Now invent a nickname that zeroes in on that quality—by insisting on its “flattering” opposite.  Giant?  Hardbody?  Tycoon?  Magic Mike?  Pick the most humiliating term you can—the one that means, “This is all we see about you, and all we’re ever going to see.  And once we see it, that’s it.  You’re permanently undateable, uninteresting, and uncool.”

Now imagine, say, one dealer in ten using this nickname every time he comes to the table.  And nobody says anything, nobody says, “Oh, no, this is one terrific, sexy guy—this is one fierce player—this is somebody hot and interesting and fun.” No one is shocked, because they see you that way too.

Well, that’s how I feel about “young lady.”  Hey, I’ve never been one of the cool kids, and I’m probably not about to start now.  But I can at least refuse the name that says, “You are the opposite of cool.”  I can hope that by refusing that name, someone takes a step back—maybe at the table, maybe at home—and says, “Huh.  Maybe there’s another way of seeing—another set of categories—another possibility.” I can demand a name that affirms the truth I know: that my vitality, my sexuality, my presence have become not weaker with age, but stronger.  Neither young nor a lady—that’s me.