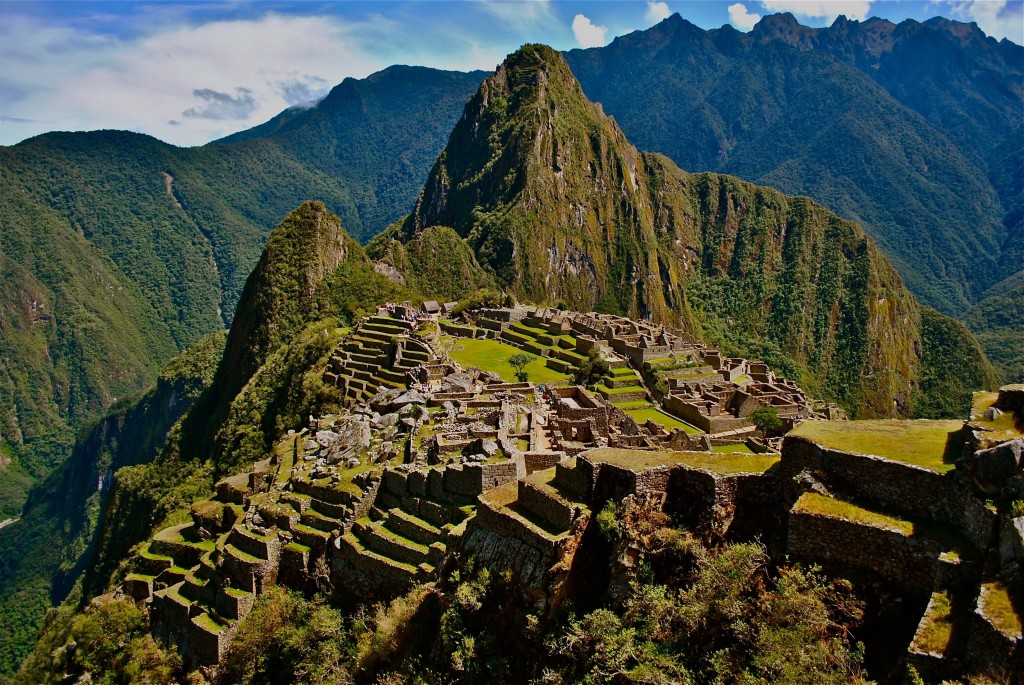 One of my tour companions during a trip to Peru alerted me to a long Pablo Neruda poem about visiting Machu Picchu in 1943. Experiencing a world-weary angst, Neruda describes how he was revitalized by the visit. “Heights of Macchu Picchu” (Neruda spells it with an extra “c”) is a difficult high modernist poem but reading it enhanced my own visit.

First of all, a confession. High modernism—the highly allusive and experimental literature written between the two world wars—is the literary period that eludes me the most. I’ve tried really hard but have failed to fully engage with such works as the late poems of T. S. Eliot, James Joyce’s Ulysses (I’ve read it twice), Ezra Pound’s Cantos, and Virginia Woolf’s The Waves. Neruda owes a lot to Eliot and there is much about “Heights of Macchu Picchu” that I do not understand.

The poem begins with a spiritually drained Neruda seeking to locate humanity’s nobility and coming up short. He sadly concludes that urban life and industrial society have diminished us. At one point he notes that

not one death but many come to each,
each day a little death: dust, maggot, lamp,
drenched in the mire of suburbs, a little death with fat wings
entered into each man like a short blade
and siege was laid on him by bread or knife…
all of them ominous dwindling each day
was like a black cup they trembled while they drained.

Neruda would like to experience humanity in its bigness, not in its smallness:

I wished to swim in the most ample lives,
the widest estuaries…

Unfortunately, he instead finds that “Man” has closed himself off to the poet:

little by little…denying me,
closing his paths and doors so that I could not touch
his wounded inexistence with my divining fingers…

The first five cantos all proceed along this line. Neruda describes himself, in his despair, reduced to a hovel-like existence.

The mood changes in Canto VI, however, as a result of Neruda’s vision to Machu Picchu. The “ladder of the earth” is the extraordinary terraces one encounters at the site and throughout the Andes. The “two lineages that had run parallel” are nature’s cycle of life and humanity:

Then up the ladder of the earth I climbed
through the barbed jungle’s thickets
until I reached you Macchu Picchu.

Tall city of stepped stone
home at long last of whatever earth
had never hidden in her sleeping clothes.
In you two lineages that had run parallel
met when the cradle both of man and light
rocked in a wind of thorns.

Mother of stone and sperm of condors.

High reef of the human dawn.

Spade lost in the primordial sand.

Neruda’s birth images point to new hope. I learned on my trip that condors were revered by the Incas as symbols of freedom while the image of the city as an emerging reef in a sea of clouds signals a new revelation. The Temple of the Sun looks out upon the human dawn, a cradle where man and light, the two lineages, are “rocked in a wind of thorns.” (In the Whitmanesque image of the rocking cradle, Neruda acknowledges, like Whitman, that the winds can blow cold and that the new dawn is not without pain and hardship.) The rest of the earth may have been sleeping but Machu Picchu is not asleep. The sands of time may have buried everything else but a lost spade is digging out the city. Neruda’s faith in human beings has returned.

Machu Picchu for Neruda is the magnificence of nature joined with the magnificence of human endeavor, and I too was awed by both the architectural marvels and the mountains that soar on either side of them. Machu Picchu is not so much about humans conquering nature, despite the mind-boggling feat of cutting away the mountain and carting up large boulders to construct seamless temples. Machu Picchu feels more as if humans are mirroring nature’s grandeur.

Neruda sees all the stages of human life wound up in the ancient city. The Incas, focused like the Egyptians on life after death, looked to touch the earth in profound ways so that they might recognize it after they died:

The fleece of the vicuna was carded here
to clothe men’s loves in gold, the tombs and mothers,
the king, the prayers, the warriors.

Up here men’s feet found rest at night
near eagle’s talons in the high
meat-stuffed eyries. And in the dawn
with thunder steps they trod the thinning mists
touching the earth and stones that they might recognize
that touch come night, come death.

The civilization did not last, of course, and Neruda, a socialist whose heart is with collective humankind, sees the Incas as having died a big death, hurled from the ramparts into an abyss whose depth matched their greatness. (In point of fact, the Incas were not hurled from Machu Picchu, but such executions did in fact happen elsewhere.) Though the Incas no longer exist as a civilization, their greatness continues on:

You no longer exist: spider fingers, final
threads, tangled cloth—everything you were
dropped away: customs and tattered
syllables, the dazzling masks of light.

And yet a permanence of stone and language
upheld the city raised like a chalice
in all those hands: live, dead and stilled,
aloft with so much death, a well, with so much life,
struck with flint petals: the everlasting rose, our home,
this reef on Andes, its glacial territories.

The chalice, which contrasts with the black cup tremblingly drunk by little people earlier in the poem, points towards the Last Supper and the promise of resurrection. It is lifted high in death–the blood of the crucifixion–yet it is deep, a life-promising well. We have reason to believe in humankind after all.

Neruda has one last major idea. He is a poet of the common man and the Incas who receive credit for Machu Picchu are the Incan emperors, beginning with the great Pachacuti, the man who conceived of Machu Picchu and began the construction. But what about all those “little” lives who dragged the stones and set them upon one another? The workers who suffered hardship to build Machu Picchu have had their stories erased:

Macchu Picchu, did you lift
stone upon stone on a groundwork of rags?
coal upon coal and, at the bottom, tears?
fire-crested gold, and in that gold, the bloat
dispenser of this blood?

Let me have back the slave you buried here!

Neruda lets us know that he is here to speak for these forgotten men and women:

I come to speak for your dead mouths.

Forgotten though they are, Neruda sees the silent ones as big because they were involved in this great enterprise. In other words, the pessimism about humanity that drags him down at the beginning of the poem has given way to new confidence. It was weak in him to lose sight of humanity’s greatness and, feeling renewed, he knows he can step up and be a spokesperson for the workers of the world. In other words, Machu Picchu has given him back his mojo.

Last week I learned that the lost Incan city has that effect on people.

This entry was posted in Neruda (Pablo) and tagged "Heights of Neruda", Pablo, Working class. Bookmark the permalink. Post a comment or leave a trackback: Trackback URL.