Reveling in Isaac’s Self Sacrifice 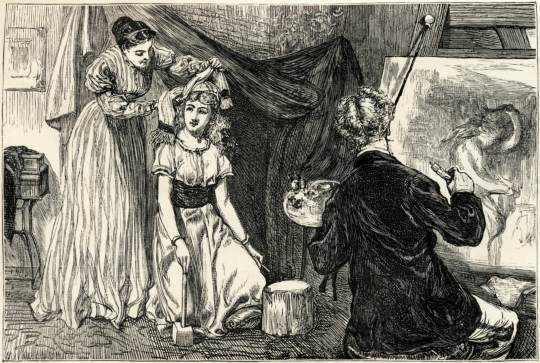 The painting of Jael in “Last Chronicle of Barset”

Today’s Old Testament reading is Abraham’s planned sacrifice of Isaac, one of the most disturbing stories in the Bible. To approach it on a lighter note, I look at Trollope’s comic use of the passage in The Last Chronicle of Barset. In the process, we are given insight into the machinations of a passive aggressive personality.

In Trollope’s novel, the shallow Mrs. Dobbs Broughton (originally Maria Clutterbuck) spices up her dull marriage by flirting with painter Conway Dalrymple and assisting his project to paint her friend Clara as Jael, the Hebrew heroine famous for driving a stake through the head of attacking general Sisera.

She also takes a hand at matchmaking—between the painter and her friend—but here she is neither honest with herself or with them. Even as she seems to work on their behalf and applauds herself on her heroic self sacrifice, she also sabotages the match at every opportunity.

She borrows from the Biblical story the image of Issac gathering the fagots that will be used in his own sacrifice. Here she is arranging Clara’s costume for the painting:

Mrs. Broughton had twisted a turban round Clara’s head, as she always did on these occasions, and assisted to arrange the drapery. She used to tell herself as she did so, that she was like Isaac, piling the fagots for her own sacrifice. Only Isaac had piled them in ignorance, and she piled them conscious of the sacrificial flames. And Isaac had been saved; whereas it was impossible that the catching of any ram in any thicket could save her. But, nevertheless, she arranged the drapery with all her skill, piling the fagots ever so high for her own pyre.

When she leaves the room so that Dalrymple can propose to Clara, we learn that he sees through her:

Dalrymple was aware that Mrs. Dobbs Broughton, though she was very assiduous in piling her fagots, never piled them for long together. If he did not make haste she would be back upon them before he could get his word spoken.

And sure enough, she returns to the room in time to interrupt the proposal:

“Just to show you that it is not for the sake of the picture that I come here. Clara—” Then the door was opened, and Isaac appeared, very weary, having been piling fagots with assiduity, till human nature could pile no more. Conway Dalrymple, who had made his way almost up to Clara’s seat, turned round sharply towards his easel, in anger at having been disturbed. He should have been more grateful for all that his Isaac had done for him, and have recognized the fact that the fault had been with himself. Mrs. Broughton had been twelve minutes out of the room. She had counted them to be fifteen,—having no doubt made a mistake as to three,—and had told herself that with such a one as Conway Dalrymple, with so much of the work ready done to his hand for him, fifteen minutes should have been amply sufficient. When we reflect what her own thoughts must have been during the interval,—what it is to have to pile up such fagots as those, how she was, as it were, giving away a fresh morsel of her own heart during each minute that she allowed Clara and Conway Dalrymple to remain together, it cannot surprise us that her eyes should have become dizzy, and that she should not have counted the minutes with accurate correctness.

We think of the Biblical story as being about Abraham, but the Victorians, who valued self denial, were able to identify with Isaac. Even when they weren’t actually self sacrificing, they were fantasizing about doing so.

This entry was posted in Trollope (Anthony) and tagged Anthony Trollope, Last Chronicle of Barset, martyrdom, self sacrifice. Bookmark the permalink. Post a comment or leave a trackback: Trackback URL.