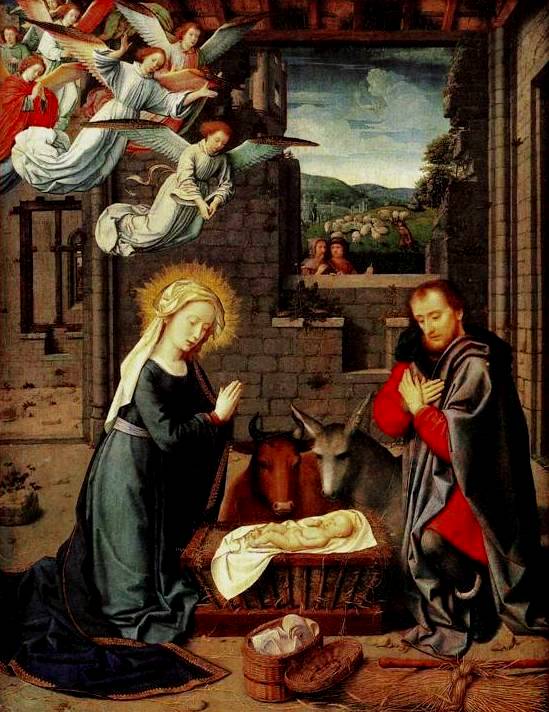 I’ve had a bad cold for the past few days so I’m reposting one of my father’s nativity lyrics. It’s a somewhat grim environmental poem that reminds me of Yeats’ “The Second Coming.” In this case, the rough beast slouching towards Bethlehem takes the form of cockroaches holding mass meetings.

Since we are in the midst of the Advent season, acknowledging our discouragement is entirely appropriate. With Earth’s sixth mass extinction well underway—this one being the first caused by a single species—we have more reason than ever to long for a Christmas miracle. At least President Obama and the Chinese have begun talking about climate change.

“The Nativity Plot” is inspired by the Douglas Adams series Hitchhiker’s Guide to the Galaxy, specifically the episode where it appears that dolphins are superior creatures who have been trying to warn humans about impending disaster. Given my father’s love of nature, the poem is a timely reminder that “peace on earth good will toward men (and women)” needs to be extended to the other species that we share the planet with. Adams’ book So Long, And Thanks for All the Fish gives a whole new meaning to “indicator species.” These canaries in our ecological coal mine remind us that we must push much harder than we have been to address issues of climate change and other threatened human-made disasters. The poem ends on an ominous note, but we can use it as a spur to action.

Like another one of my father’s poems that I shared recently, “Nativity Plot” notes that many of the symbols bound up in the Christmas story have roots in other world religions. The ox and the ass don’t show up in the gospel versions of the nativity–they were late additions to the birth story– and my father’s theory is that the ox comes from Mithra, the bull god of the Roman soldiers, while the ass is associated with the Greek god Dionysus. The holy dove that descends at Jesus’s baptism, meanwhile, might have origins in the worship of the Egyptian goddess Isis.

“Curiously enough, the dolphins had long known of the impeding destruction of the planet Earth and had made many attempts to alert mankind to the danger, but most of their communications were misinterpreted as amusing attempts to punch footballs or whistle for tidbits…” – The Hitchhiker’s Guide to the Galaxy

As in earlier times
we were alerted…

As for example when (with
tremendous foresight
and incredible organizational ability)
those two remarkable animals
the Ox and the Ass (crudely referred to
in other contexts as “Mithra” and “Dionysus”)
carefully arranged and supervised
a quiet little coming-out party
in the middle of the night in a central location in the
Middle East
in an attempt to raise the ratio of basic intelligence in the universe
(The operation had been carried out under the direction of the Dove “Isis”
who had personally delivered the main invitation
while assorted sheep goats camels sheepdogs etc.
rounded up kings and shepherds for publicity)

Or as that old folk song favorite “The Rock Island Line” puts it,

Jesus died to save our sin
Glory to God we’re gonna need him ag’in.

Other Christmas Poems by Scott Bates

Where are the Games of Yesteryear

No Room for Them in the (Holiday) Inn

A Solution to Nativity Scene Battles

Holly & Ivy Dance to the Music of the Moon

Night before Christmas on the Moon

Move with the Wind, Sleep under the Snow

An ABC of Children’s Books

Epiphany Sunday and the Arabian Nights

Epiphany from a Camel’s Point of View