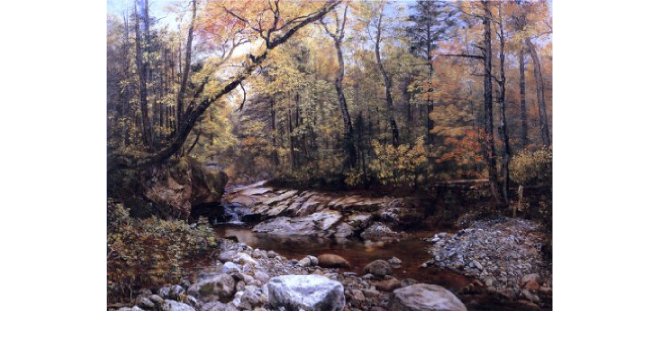 Today I share a beautiful autumn poem by a depressed Edna St. Vincent Millay, but let’s glance at some other poems first. John Keats, in the greatest English language poem about autumn, encourages the season to get over its inferiority complex:

Where are the songs of Spring? Ay, where are they?
Think not of them, thou hast thy music too…

Paul Verlaine, in a poem that every French school child memorizes, writes,

The long sobs
of autumn’s
violins
wound my heart
with a monotonous
languor.

Mary Oliver sees depression as an opportunity to get real. “Blue Heron” begins with a dismal image but ends with a comforting image. First, the opening:

Now the blue heron
wades the cold ponds
of November.

In the gray light his hunched shoulders
are also gray.

He finds scant food–a few
numbed breathers under
a rind of mud.

Several years ago a student of mine, who suffered from depression, wrote that the poem is about survival. When we are hunkered down in our misery, she said, we need to tend to whatever little fire we have:

In a house down the road,
as though I had never seen these things–
leaves, the loose tons of water,
a bird with an eye like a full moon
deciding not to die, after all–
I sit out the long afternoons
drinking and talking;
I gather wood, kindling, paper; I make fire
after fire after fire.

In Millay’s “Autumn,” as in Verlaine’s poem, the poet captures the music of the heart breaking. The feathered pampas-grass, its ranks thinned, is like embattled Native American warriors. The dark creek, its customary defenses gone, suddenly finds itself exposed: “Stripped of its secret, open, stark and bleak,/ Blackens afar the half-forgotten creek.”

This speaker is not to be consoled by nature’s cyclical promise that Beauty will be born again after first ailing and dying. Such “consolation” is like clumsily reassuring mourners than their loved one is in a better place. In the depths of depression, the poet can only see Beauty stiffened like a corpse and staring up at the sky. “Oh, Autumn! Autumn!” she cries out in her agony, “What is the spring to me?”

And yet, out of that agony, arises beauty:

WHEN reeds are dead and a straw to thatch the marshes,
And feathered pampas-grass rides into the wind
Like agèd warriors westward, tragic, thinned
Of half their tribe, and over the flattened rushes,
Stripped of its secret, open, stark and bleak,
Blackens afar the half-forgotten creek,–
Then leans on me the weight of the year, and crushes
My heart. I know that Beauty must ail and die,
And will be born again,–but ah, to see
Beauty stiffened, staring up at the sky!
Oh, Autumn ! Autumn !–What is the Spring to me?