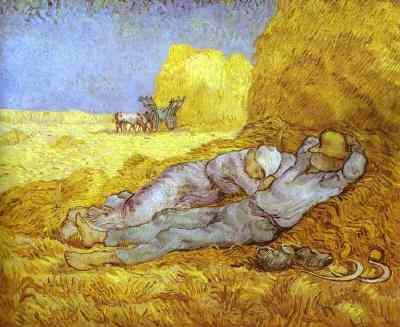 Here in Maryland, as elsewhere in the United States, we are undergoing the longest summer I have ever seen. And this is after last year’s “hottest-summer-on-record.”

Aside from this being more worrisome evidence of climate change, it also puts a new spin on John Keats’s masterful “To Autumn.” I’ll explain how in a moment.

First, however, let’s note that this isn’t the first instance of a poem looking different to us because of a major shift in climate. The “rough winds” that “do shake the darling buds of May” in Shakespeare’s Sonnet 18 make more sense once one realizes that Europe at the time was undergoing a mini ice age. That is why “summer’s lease hath all too short a date.”  Usually one is safe comparing one’s love to a morning in May.

In “To Autumn” we have the opposite situation, with the summer extending out. Fall is generally a season of mists, but in this case it is conspiring with “the maturing sun” to yield a rich plenitude. Flowers continue to bud, causing the bees to think “warm days will never cease,/For summer has o’er-brimm’d their clammy cells.”

There is a drowsy summer feel to this autumn poem, with images of sleeping in the fields or watching, for hours and hours, the “last oozings” of the cider press.

The signs indicates that this will not last, however. The poem takes on increasing urgency as one realizes that Keats is imagining his approaching death—he would die less than a year and a half after composing it—as signaled by the ominous flocks of swallows. However blissful life appears at the moment, winter will come.

In the meantime, however, life has never appeared as beautiful or as precious. An Indian summer has granted the poet a temporary reprieve.

In other words, part of the poem’s power lies in the summer going on and on. If all falls were like this, it wouldn’t seem so miraculous. And indeed, English falls are more likely to be like the one described in Sir Gawain and the Green Knight:

But harvest with harsher winds follows hard after,
Warns him to ripen well ere winter comes:
Drives forth the dust in the droughty season,
Wroth winds in the welkin wrestle with the sun,
The leaves launch from the linden and light on the ground,
And the grass turns to gray, that once grew green.
Then all ripens and rots that rose up at first,
And so the year moves on in yesterday’s many,
And winter once more, by the world’s law,
draws nigh.

This is the perspective of a man, Gawain, who also has a rendezvous with death. Yet though the imagery is grimmer, the vividness of the imagery testifies to how a season looks to us when we sense we are seeing it for the last time. We take notice of very falling leaf.

Season of mists and mellow fruitfulness,
Close bosom-friend of the maturing sun;
Conspiring with him how to load and bless
With fruit the vines that round the thatch-eves run;
To bend with apples the moss’d cottage-trees,
And fill all fruit with ripeness to the core;
To swell the gourd, and plump the hazel shells
With a sweet kernel; to set budding more,
And still more, later flowers for the bees,
Until they think warm days will never cease,
For summer has o’er-brimm’d their clammy cells.

Who hath not seen thee oft amid thy store?
Sometimes whoever seeks abroad may find
Thee sitting careless on a granary floor,
Thy hair soft-lifted by the winnowing wind;
Or on a half-reap’d furrow sound asleep,
Drows’d with the fume of poppies, while thy hook
Spares the next swath and all its twined flowers:
And sometimes like a gleaner thou dost keep
Steady thy laden head across a brook;
Or by a cyder-press, with patient look,
Thou watchest the last oozings hours by hours.

Where are the songs of spring? Ay, Where are they?
Think not of them, thou hast thy music too,—
While barred clouds bloom the soft-dying day,
And touch the stubble-plains with rosy hue;
Then in a wailful choir the small gnats mourn
Among the river sallows, borne aloft
Or sinking as the light wind lives or dies;
And full-grown lambs loud bleat from hilly bourn;
Hedge-crickets sing; and now with treble soft
The red-breast whistles from a garden-croft;
And gathering swallows twitter in the skies.

This entry was posted in Keats (John) and tagged "To Autumn", Autumn, climate change, death and dying, John Keats, Seasons, Sir Gawain and the Green Knight. Bookmark the permalink. Post a comment or leave a trackback: Trackback URL.