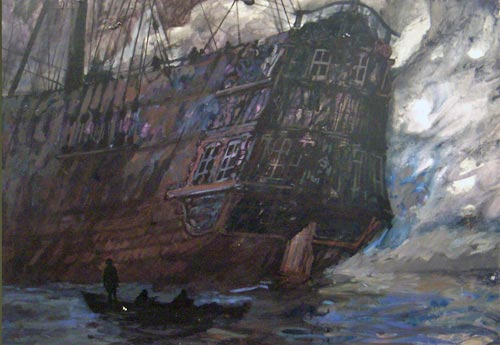 In case you missed it, I am reposting an article I wrote this past April on Herman Melville’s novella Benito Cereno, which I’m beginning to see as a major parable for our time. I am reminded of the novella as I see the Right’s response to the terrifying new report on climate change, which lays out how deeply we are already being impacted.

In a fine instance of gallows humor, someone tweeted that the five stages of climate change grief appear to be denial, anger, bargaining, depression, and drowning.

In the article I pointed out that the most interesting thing about Melville’s story is the refusal of Captain Delano to acknowledge the dire situation occurring right in front of his eyes. He sees both less and more than what is before him. This is a perfect depiction of today’s Right, which closes its eyes to transparent scientific research and replaces it with elaborate conspiracy theories. New York Magazine’s Jonathan Chait notes that even people who should know better, like Charles Krauthammer and George Will, are engaging in elaborate intellectual gyrations to keep from facing up to the truth.

If one sees Delano and Cereno as two parts of the same psyche, then Delano knows, deep down, that Babo’s knife is at his throat—which is to say that the Right knows that the climate science is right but has retreated into the pathologies of denial. As I noted in my post, Melville had first hand experience with such denial: the country in 1855, when he wrote the story, had to engage in an elaborate double consciousness: On the one hand, slave owners outwardly claimed that all was well and even convinced themselves that they could continue living the good life. Deep down, however, they lived in constant fear that their “faithful slaves” would rise up and wreak their revenge. Many in America knew that the situation was untenable but, unwilling to upset the country’s staggeringly high investment in slaves, strove to think otherwise. (Studies show that, by today’s dollars, the worth of all slaves at the start of the Civil War was close to $10 trillion and rapidly rising.)

Put another way, the willful blindness of the Right to what is happening to the planet, like Delano’s seeming cluelessness, is connected with its desperate need for assurance that the ship can keep on sailing and nothing will go wrong.

In the story, Cereno finally succeeds in opening Delano’s eyes to the takeover of the ship. What will it take in the case of today’s GOP?

Last week I set forth a theory of how social inequality generates disturbing fantasies and how, conversely, we can analyze fantasy literature to better understand our social problems. Look at all the pundits–for instance Maureen Dowd of The New York Times and Salon’s Aaron Kase– who have been examining today’s world through the lens of Game of Thrones. Today I am writing about Herman Melville’s Benito Cereno, which shows the mental games we play when facing intractable problems and which I’m teaching at the moment in Literature in History II. I’ll also be discussing what has become known as Obama Derangement Syndrome.

First, however, let me give a nod to my favorite instance of a fantasy classic that grew out of rage over growing social inequality. In my book How Beowulf Can Save America, I argue that its trolls and dragons are symbolic versions of resentful warriors and greedy kings who were sabotaging the fundamental social contract of early Anglo Saxon society. The contract called for warriors to fight loyally for their kings and give them the wealth they acquired and for kings to redistribute that wealth fairly and generously. If Beowulf continues to pack a punch today, it is because we have our own version of trolls and dragons in a society that is experiencing growing levels of inequality that threaten our democracy.

Now on to Benito Cereno, which, while purportedly realistic, ventures into strange gothic territory of vaporous mists and ominous chanting where nothing is what it seems. Most striking about the story, however, is the cluelessness of Captain Delano, who climbs aboard a ship in distress but doesn’t realize that a slave rebellion is underway. Instead, he posits a number of other theories about why Captain Benito Cereno is distressed and why his seemingly faithful slave Babo follows him around so closely.

I’ll talk in a moment about why I think the story gives us insight into today’s conservative extremists and “truthers” but let’s first situate the story historically. It was written in 1855 and was based on a real life incident in 1805 of slaves  seizing the Spanish ship that was carrying them to the Americas. As in the story, slaves deluded Captain Delano for an entire day until Cereno leapt into his rowboat as it was pulling away and revealed that he was being held captive.

The story was relevant in the years immediately prior to the Civil War for a couple of reasons. On the one hand, the South was trying to present slavery as a benign and humane institution and many northerners like Delano were willing to go along with this charade. Self-delusion was preferable to attempting to end slavery itself, which seemed beyond the realm of possibility.

Following the publication of Uncle Tom’s Cabin in 1850, the fiction that slavery was benign became harder to maintain, requiring even higher degrees of denial if Americans were to think well of themselves. In that way Delano’s blindness is not just a personal failing but an understandable response to intolerable historical pressures:

Captain Delano’s surprise might have deepened into some uneasiness had he not been a person of a singularly undistrustful good-nature, not liable, except on extraordinary and repeated incentives, and hardly then, to indulge in personal alarms, any way involving the imputation of malign evil in man.

Melville’s story goes on to show that denial can go hand in hand with elaborate conspiracy theories. The very factors that prompt us to see less than what is before us also cause us to see more. In Delano’s case, he begins to attribute Cereno’s strange behavior to a concerted plot that the Spanish captain and his slaves are hatching to seize his own ship. Likewise, in the American South those slave owners who saw their slaves as stupid and childlike also saw them as capable of mounting vast and intricate rebellions. Babo is at once a friendly Newfoundland dog (so Delano describes him) and a fiendish mastermind.

Today, those on the far right have a similarly contradictory vision of their black president. On the one hand, he is a stupid man who got into Harvard Law School through affirmative action and who needs a teleprompter when he speaks. On the other hand, he is a diabolically clever man who time and again gets away with scandals.  He is a clueless naïf who gets rolled by Vladimir Putin and he is a lawless dictator who tyrannically imposes his will. Liberals mock how the right can’t get its story straight, but there’s a logic to the contradictory images: they arise out of the right’s hysteria over what they see as an apocalyptic situation.

That situation involves frightening climate change, rampant gun violence, soaring income inequality, stagnating wages, and dramatic demographic shifts.  The response: deny where you can and devise conspiracy theories about the rest. Oh, and when it comes to legislating, pass more abortion restrictions.

At the end of Benito Cereno, the whites seize control of the ship and the slaves are either hanged or sold. Many on the American right dream of impeaching Obama (although they can’t agree on what grounds).

But here’s the problem: they can never be free of Obama because the president is not real to them. He is a projection of their dark fears, and those fears will still be in full force after he leaves office. Delano is upset to see Cereno downcast after he is free and avenged but receives this explanation:

“You are saved,” cried Captain Delano, more and more astonished and pained; “you are saved: what has cast such a shadow upon you?”

If Hillary is our next president, I predict rightwing fears will switch to devouring female monsters. Wild conspiracy stories will continue to emerge.