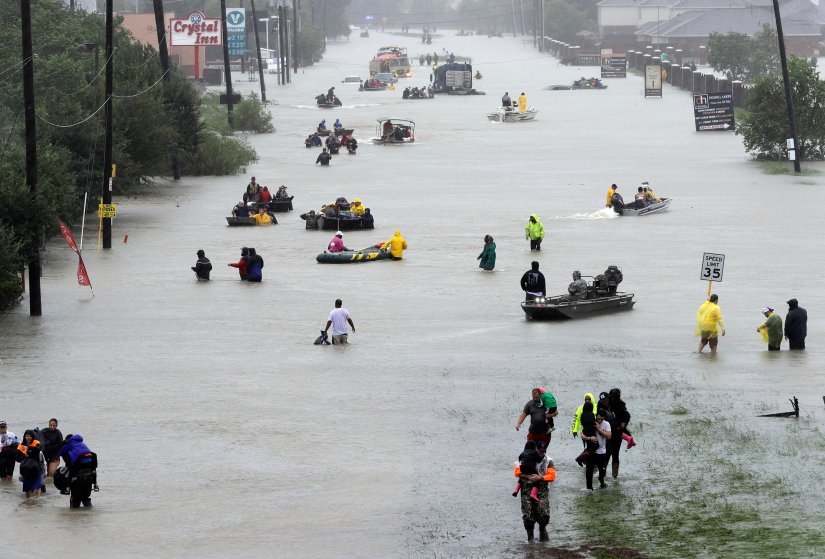 Edith Sitwell’s “Still Falls the Rain” is not about actual rain but about the London blitzkrieg. Nevertheless, it is a poem that comes to mind as Hurricane Harvey pounds Houston and the Gulf coast. Sitwell captures the kind of despair that residents are currently feeling as the downpour goes on and on.

Sitwell’s poem is notable because it doesn’t single out the Germans but finds fault in all humankind, invoking images of Christ dying for our collective sins. Her references to the human brain nurturing its greed could apply to the greed that has contributed to the Harvey catastrophe. Scientists estimate that climate change has added 30% moisture to the hurricane, and they point out that lax housing regulations have also contributed to Houston’s flooding problems: much of the ground that could be absorbing the rain has been paved or built over. Much of Houston is built on flood plain.

Given the human contributions to the cataclysm, it’s significant that Sitwell quotes Christopher Marlowe’s Doctor Faustus in her poem. Faustus, after all, is a man who sold his soul to the devil so that he could (among other things)

Be…on earth as Jove is in the sky,
Lord and commander of these elements.

Faustus thinks that he will be able to bend nature to his will. In one soliloquy, he has an Army Corps of Engineers fantasy:

I’ll have them wall all Germany with brass,
And make swift Rhine circle fair Wertenberg…

Sitwell quotes Faustus when he is dying and realizing that all his ambitions are for naught. Yet even at this extreme moment, he is unwilling to relinquish his desire for control. When he says,”O Ile leape up to my God: who pulles me doune,” it is his will to control that is pulling him down. He cannot, as the saying has it, “Let go, let God,” but wants to dictate even the terms of his death.

Whether we learn humility from Harvey remains to be seen. I suspect that, once the storm subsides, we will return to pouring hydrocarbons into the atmosphere as though nothing happened. We’ve done so since Hurricane Sandy and why should this be any different?

Writing in England’s direst moment, Sitwell offers us one consolation. Though we may have abandoned God, God hasn’t abandoned us. In a line that sounds as though it were written by George Herbert, we are assured, “Still do I love, still shed my innocent light, my Blood, for thee.”

Still falls the Rain—
Dark as the world of man, black as our loss—
Blind as the nineteen hundred and forty nails
Upon the Cross.

Still falls the Rain
With a sound like the pulse of the heart that is changed to the hammer-beat
In the Potter’s Field, and the sound of the impious feet
On the Tomb:

Still falls the Rain
In the Field of Blood where the small hopes breed and the human brain
Nurtures its greed, that worm with the brow of Cain.


Still falls the Rain
At the feet of the Starved Man hung upon the Cross.
Christ that each day, each night, nails there, have mercy on us—
On Dives and on Lazarus:
Under the Rain the sore and the gold are as one.

Still falls the Rain—
Still falls the Blood from the Starved Man’s wounded Side:
He bears in His Heart all wounds,—those of the light that died,
The last faint spark
In the self-murdered heart, the wounds of the sad uncomprehending dark,
The wounds of the baited bear—
The blind and weeping bear whom the keepers beat
On his helpless flesh… the tears of the hunted hare.

Still falls the Rain—
Then— O Ile leape up to my God: who pulles me doune—
See, see where Christ’s blood streames in the firmament:
It flows from the Brow we nailed upon the tree
Deep to the dying, to the thirsting heart
That holds the fires of the world,—dark-smirched with pain
As Caesar’s laurel crown.

Then sounds the voice of One who like the heart of man
Was once a child who among beasts has lain—
“Still do I love, still shed my innocent light, my Blood, for thee.”