This Is the Way the World Ends 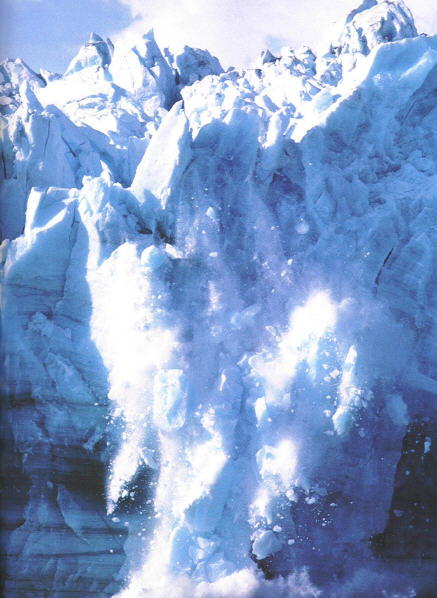 “Some say the world will end in fire,/Some say in ice,” Robert Frost writes in his well known poem “Fire and Ice.” After the terrifying news that Antarctica’s Thwaites Glacier is irreversibly sliding into the ocean, we can now say both predictions are correct: first hydrocarbons from burning fossil fuels heat up the earth and then melting ice raises the ocean level by four feet or more over the next 200 years.

Here’s from a National Geographic report two days ago:

A massive glacier system in West Antarctica has started collapsing because of global warming and will contribute to significant worldwide sea-level rise, two teams of scientists warn in a pair of major studies released Monday.

Scientists had previously thought the two-mile-thick (3.2 kilometers) glacier system would remain stable for thousands of years, but new research suggests a faster time frame for melting.

A rapidly melting section of the West Antarctic Ice Sheet appears to be in irreversible decline and will sink into the sea, scientists at the University of California, Irvine and NASA reported Monday.

“This retreat will have major implications for sea-level rise worldwide,” said Eric Rignot, a UC-Irvine Earth science professor and lead author of a study to be published in a journal of the American Geophysical Union.

Frost uses apocalyptic scenarios, notably Milton’s fire and Dante’s ice, to capture the end of a relationship. Regardless of whether the partners are fiery passionate or icy cold, the relationship is in trouble. Here’s the poem:

Some say the world will end in fire,
Some say in ice.
From what I’ve tasted of desire
I hold with those who favor fire
But if it had to perish twice,
I think I know enough of hate
To say that for destruction ice
Is also great
And would suffice.

In our case, we’re facing, if not literal apocalypse, then at least the submersion of our coastline.

Speaking of apocalyptic accounts that get at our situation, here’s a passage from The Last Battle as C. S. Lewis rewrites the Book of Revelation:

At last something white—long, level line of whiteness that gleamed in the light of the standing stars—came moving towards them from the eastern end of the world. A widespread noise broke the silence: first a murmur then a rumble, then a roar. And now they could see what it was that was coming, and how fast it came. It was a foaming wall of water. The sea was rising. In that tree-less world you could see it very well. You could see all the rivers getting wider and the lakes getting larger, and separate lakes joining into one, and valleys turning into new lakes, and hills turning into islands, and then those islands vanishing. And the high moors to their left and the higher mountains to their right crumbled and slipped down with a roar and a splash into the mounting water; and the water came swirling up to the very threshold of the Doorway (but never passed it) so that the foam splashed about Aslan’s forefeet. All now was level water from where they stood to where the waters met the sky.

Meanwhile, GOP Florida Senator Marco Rubio, who hopes to become president, flatly declared Monday that “I do not believe that human activity is causing these dramatic changes to our climate the way these scientists are portraying it,” even as his home city of Miami stands to be hit particularly hard hit. Unlike other coastal cities, its porous limestone base means that no sea wall can stem the rising tide, which will come bubbling up from underneath.

In the GOP today, acknowledging global climate change means “forget your presidential aspirations.” Why are not more people appalled?