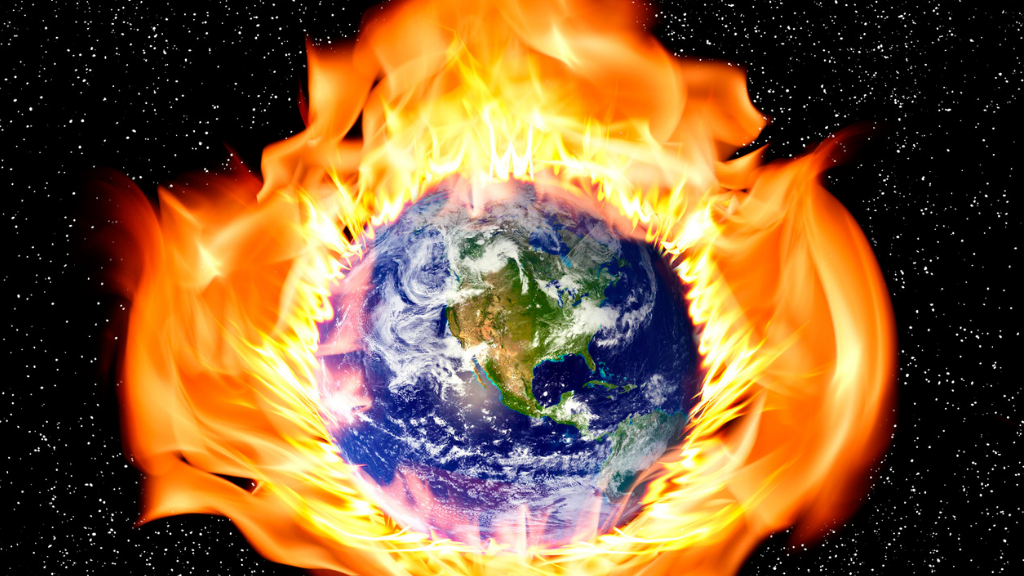 The climate change news keeps getting grimmer, leading me to repost an essay about Leslie Marmon Silko’s account of environmental apocalypse. At the end of the post, I also link to other literature I’ve used to explore climate change, its causes and what we can do about it.

First, the ferocity of Hurricane Michael provides more evidence–if more evidence is needed at this point–that climate change is making our hurricanes more intense. And then there is this, as reported by The New Yorker:

Last night, in Incheon, South Korea, after a week of deliberation, the I.P.C.C. [International Panel on Climate Change] released the new findings. The summary tells a nightmarish tale—one much worse than any of those in the I.P.C.C.’s previous reports—surveying the climate-change impacts we’re already experiencing with one degree of warming, and the severity of the impacts to come once we surpass 1.5 degrees of warming. Ten million more people would be exposed to permanent inundation, and several hundred million more to “climate-related risks and susceptible to poverty.” Malaria and dengue fever will be more widespread, and crops like maize, rice, and wheat will have smaller and smaller yields—particularly in sub-Saharan Africa, Southeast Asia, and Central and South America. Security and economic growth will be that much more imperilled. “Robust scientific literature now shows that there are significant differences between 1.5 and 2 degrees,” Adelle Thomas, a geographer from the Bahamas and also one of the report’s lead authors, told me. “The scientific consensus is really strong. It’s not just a political slogan: ‘1.5 to stay alive.’ It’s true.”

Now we know how we will experience the end of the world: while we’re being battered to death by extreme weather events, including the hottest summer on record and accelerating arctic melt, we won’t even notice because we’ll be so distracted by Donald Trump’s attempts to destroy NATO, the EU, the rule of law, constitutional democracy, the free press, free and fair elections, clean air and water, endangered species, national parks, and truth itself. We should all be on red alert about climate change and instead we’re distracted by political chaos.

I’ve previously blogged on Leslie Marmon Silko’s apocalyptic poem in her novel  Ceremony (1977), but it so directly captures the Trump administration’s environmental approach that it’s worth sharing again. It’s about a witches convention in which the attendees vie for the designation of most evil witch. The winner tells a story that horrifies the other witches.

It’s an account of white settlement of the Americas, starting with the introduction of gunpowder and infectious diseases and concluding with the invention of the atomic bomb (with uranium mined from sacred Indian sites). Silko wrote the poem before we recognized the dangers of climate change, but it gets at Trump’s wholesale attack on the environment. Here’s from the witch’s story:

Caves across the ocean
in caves of dark hills
white skin people
like the belly of a fish
covered with hair.

The wind will blow them across the ocean
thousands of them in giant boats
swarming like larva
out of a crushed ant hill.

They will carry objects
which can shoot death
faster than the eye can see.

They will kill the things they fear
all the animals
the peole will starve.

They will poison the water
they will spin the water away
and there will be drought
the people will starve.

Entire villages will be wiped out
They will slaughter whole tribes.

and those they do not kill
will die anyway
at the destruction they see
at the loss
at the loss of the children
the loss will destroy the rest.

Stolen rivers and mountains
the stolen land will eat their hearts
and jerk their mouths from the Mother.
The people will starve.

The rest of the witches at the coven can’t believe that someone would be so destructive:

So the other witches said
“Okay you win; you take the prize,
but what you said just now–
it isn’t so funny
It doesn’t sound so good.
We are doing okay without it
we can get along without that kind of thing.
Take it back
Call that story back.”

And now for the really bad news:

But the witch just shook its head
at the others in their stinking animal skins, fur and feathers.
It’s already turned loose.
It’s already coming
It can’t be called back.

If white society made some progress in the 20th century, consciousness-raising authors like Silko can take some of the credit. For a while, protecting the environment even appeared to be a bipartisan affair. With Trump’s unapologetic plundering of the earth, however, we are watching the full force of witchery unleashed.

The overriding question for our times is whether the story can be called back.

Further thought: Silko brilliantly shows us that fear drives environmental depredation. The animus against the wilderness is more primal than the desire to make money, even though that desire is there. Humans seek to dominate when they fear that nature will swallow them up.

I suspect that, deep down, many Trump supporters know that climate change is real. They are frightened so they voted for a man who claimed he could kick nature’s ass.

Previous posts on literature that casts light upon issues raised by climate change:

Many of my posts have been about climate change denial. For instance:

Climate Scientists, Our Cassandras–Climate scientists must feel like Agamemnon’s Cassandra as they try to warn the world.

Donne’s Warning about Climate Change – Donne mentions the movement of the spheres in his poem “Valediction: Forbidding Mourning,” but they are distant, and he makes the important point that we only see the effects of nature that occur right before our eyes, not the larger patterns. Think of Senator James Inhofe bringing a snowball to the Senate to disprove global warming.

Tolstoy and Climate Change Denial – We can see that climate change denialists follow in the footsteps of the Moscow aristocrats in War and Peace, who can’t believe that Napoleon will take the city.

Out of Denial and into Responsibility – Jack Burden in Robert Penn Warren’s All the King’s Men gives us a great description of the philosophy of denial, which he calls “idealism.” By the end of the novel, fortunately, he decides to face up to reality.

Obama: A Hard Rain’s A Gonna Fall – Poet Henry Vaughan decries fools who “prefer dark night before true light,” and Alexander Pope in The Dunciad goes after the dunces who turn their backs on science, intelligence, and logic.

GOP Denies a Giant Problem – For another instance of denial, it is hard to top Jonathan Swift’s Lilliputians, who refuse to believe that other men like Gulliver could exist. Their philosophers conclude that he must have dropped from the moon.

Haiyan, Climate Change, and King Lear – King Lear also closes his eyes to the family and political storms  that he has triggered. His most trustworthy counselor advises him to “See better, Lear,” thereby earning banishment.

When American Fantasies Are Dangerous – In American Gods, Neil Gaiman gives us a great example of denial: southern slave owners refuse to acknowledge that there has been a successful slave rebellion in Haiti.

Melville and Climate Change Denial – Another instance of slave society denial occurs with Captain Delano in Melville’s fine novella Benito Cereno refusing to see the rebellion going on right before his eyes..

Some write about the grim future ahead:

Elemental Joy in California’s Wildfires? – Can it be possible that some people are actually reveling in the consequences of climate change?

Will Warm Days Never Cease — Classic poems like Keats’s “Ode to Autumn” suddenly look different as climate change has its way with us.

How Will the Future Judge Us for Trump? — Jane Hirshfield has a poem that gets us to look at ourselves from a future perspective, including what we did not do in the face of disaster.

Caves of Ice, Prophecies of War – Coleridge’s “Kubla Khan” poem came to mind as I heard the catastrophic news about the breakup of arctic ice.

Neil Gaiman and the Pipeline Protests — Gaiman’s American Gods should us what will happen to us if we offend the local deities.

Our Children Will Reproach Us – Lucille Clifton shows us how our children will view us.

Climate Action Will Lead to Dystopia – Russell Hoban’s post-apocalyptic novel Riddley Walker is about nuclear holocaust, not climate change, but it captures the same disregard and contempt for future generations that climate denialists are exhibiting.

Hydrocarbons Unleash an Angry God – Euripides’s The Bacchae shows how nature responds when we try to impose our will upon it. The control freak King Pentheus is torn apart at the order of Dionysus.

This Is the Way the World Ends – Robert Frost’s poem “Fire and Ice” sounds as though it was written for climate change. Will the world end in fire or ice? How about both?

Will Californians Become the New Okies? – The droughts that climate change is visiting upon California (not to mention other parts of the world) bring to mind the ecological nightmare described by John Steinbeck in Grapes of Wrath.

The Mariner’s Advice to College Students – Coleridge’s Rime of the Ancient Mariner can be read as an ecological parable—the arrogance that the mariner exhibits by shooting the albatross unleashes “life in death” upon the world.

Kingsolver Tries to Save the Planet – Barbara Kingsolver’s Flight Behavior directly takes on the issue of climate change as it shows disruptions in the migratory patterns of monarch butterflies. Most usefully, Kingsolver shows various constituencies that must learn to talk to each other if we are to address the issues.

To Save the Planet, Scientists Must Protest — Kingsolver’s Flight Behavior shows why climate scientists cannot simply retreat into their labs.

Being Right on the Climate Is Not Enough – Along these lines, Ibsen’s Enemy of the People has important lessons for climate activists: if you want to change people’s minds, avoid self-righteousness.

Climate Change: Signs of Witchery – Leslie Marmon Silko, a Laguna Pueblo writer, vividly captures environmental devastation in her novel Ceremony but also has her protagonist discover a healthier way of living in the world.

Climate Hope Shines in Dark Times – Madeleine L’Engel has a wonderful Advent poem that I shared after the world gathered in Paris this past December to combat climate change. Despite the grim forecasts, we experienced a glimmer of hope.

And finally, if you are in the mood for light verse about the environment,here are a number of poems by my father, a deep lover of nature:

An ABC of Our Attack on the Earth

The River’s Blood Turned to Stone

The Koch Brothers: Oligarchs of Oil and Ordure